Harambe: Tempering the Hatred Within Ourselves 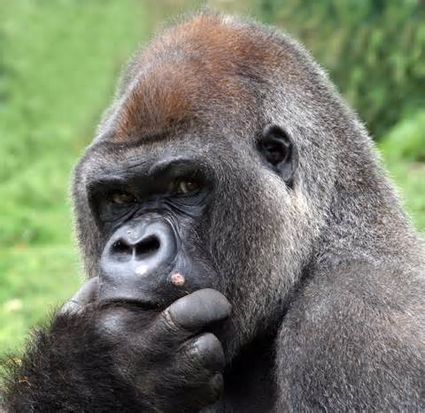 Whether or not the zoo officials were right to shoot Harambe, given the situation at hand, is a completely different question depending on what level of immediacy one chooses to apply to the circumstances. This level can range from the concrete and limited to the broad and philosophical. Further, the more abstract and long-shot the lens through which we see the event becomes, the less the problem remains attached to this gorilla, this DART team, this boy, this family, or this day at the Cincinnati Zoo.

Let's start in the immediacy of the moment, from one perspective or another. First off: You're a parent of a toddler who has been wandering all day through his own version of the already zany world of the zoo – a version bouncing and sizzling with magical sounds, smells and strangers. Your kid tells you about his magic all day. At a certain point, you fail to hear the link between illusion and reality, and if he were to warn you of impending disaster, it would slip off the polished surface of your outer ear and fall into the moat. Oops – that's your child in the moat! Omigodomigod your heart is burning like ice, racing as if frozen in time, the blood in your veins is going to burst your neck is going to explode your genetic material your life your last four years your love is getting approached and handled by a massive animal strong enough to crush the future out of that kid in one breath.

Thankfully the animal is immobilized before he has any chance to touch your love your life your future. Crumpled like a mitten, weightless on the floor next to your child who is going to live, going to learn to write or to play music and love someone of his own. Thank the Lord or thank whatever you believe in, your life has been saved.

Let's not tell this child his existence has a political or monetary price tag that can be lowered by the random combination of factors that led him, a hardly well-versed member of the world, to become the mascot of the news banner blasting the death of an equally worthy and tragically snuffed member of the world. Let's not tell the zoo officials they are murderers because of the web they were caught in wherein almost any move would bring the spider of guilt closer to embalming them in unbreakable silk bindings.

But let's not pretend either that the question of one life over another is a red-button, green-button, all-or-nothing answer. Let's not say that one creature's life is worth more than another creature's. It is no one's fault what species he was born into, or who his parents are, any more than someone can be blamed for being born into a dying native language or into the commercially successful one that is systematically repainting all the others.

It is not Harambe's fault that his body possessed the potential power of seven or eight men, no more than it is the DART team's fault that some lawyers told their superiors to avoid a law suit using one shield and not another, and the superiors, having no life-breath connected to the creatures in peril, issued an order (that is, according to psychological principles, nearly impossible to resist.) It is not Harambe's fault that any movement he made, or even stillness, was predestined to be interpreted as potential aggression, nor is it the child's fault for weighing a fraction of what that beautiful gorilla weighed.

Many outside observers want to place blame on someone for the unfair and tragic loss of a rare and wonderful individual. Understandably, they accuse the agencies directly involved of some specific misdeed. They then demand specific retribution. But the real question ought not to be whether this zoo or these parents should pay a sum of money to some authoritative agency. Instead, let's use this dilemma as a launch pad into the foundations of the system that led to this event, a system that will continue to scar lives and rage across the Internet battlefield until its pitfalls are addressed: Why are we keeping "dangerous" animals whose intentions we cannot predict, and in whose language we are illiterate, contained in fallible facilities far from their home continent? Because if we did not keep gorillas in zoos, they would rapidly vanish from the face of the earth.

Why are wild populations of Western Lowland Gorillas in such peril? A tsunami of voices answers, chorusing such varied and complex issues as climate change, government apathy, habitat destruction, and even the nonhuman animal's objectification into a commodity itself. What should be done to remedy the world? What can one individual standing on a zoo grounds with a gun and a walkie-talkie do to establish equilibrium in one piece of the broken mosaic that was once the glass mirror-face of our planet? What can one social media commenter, fingers flooded with passion and heart unbound to either threatened life, do to save the world? 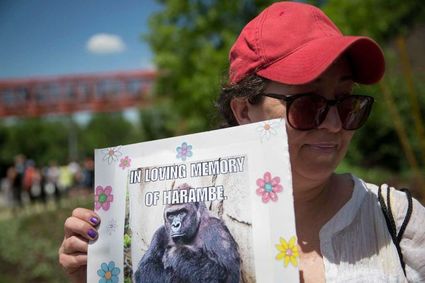 Alesia Buttrey, of Cincinnati, holds a sign with a picture of the gorilla Harambe during a vigil in his honor outside the Cincinnati Zoo & Botanical Garden, Monday, May 30, 2016, in Cincinnati

Realistically, we aren't going to solve environmental degradation, self-versus-other attitudes that still characterize interspecies interactions, or issues of individual versus collective rights in a single week as a single issue rises and falls in popularity on various sites where complete strangers exchange declarations about values of heartbeats and the price of ideas, and beat on each other for being affiliated with one political party or another.

This does not mean we should ignore the specific issue at hand, but maybe it means we should give the kid and his parents a break from being blamed for the immense global complexities in which every single one of us (myself heartily included) has actively participated. Rather than attacking the victims of each individual circumstance (in this case, Harambe, DART, the boy and his family), let's consider tempering the hatred within ourselves and working to bring the shattered corners of this multi-species world closer together rather than estranging them even farther apart.

Author Sabine Rose is a sophomore at a liberal arts college near Portland, OR.

My solution is don't keep Gorillas in a zoo. If protecting them is the goal, there are better ways.

Well said and an excellent conclusion