Palmdale Sheriff Told The Family to Stop Because "Someone Might Be Offended." 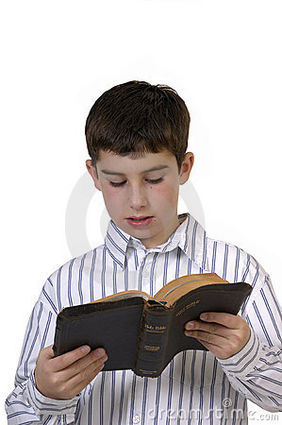 A boy reading a bible

A public school in Palmdale directed a Los Angeles Deputy Sheriff to call on the family of a seven-year-old child in order to forbid him from handing out bible verses and stories on a public sidewalk outside of the school. The deputy told the family that "someone might be offended."

The child, who attends Desert Rose Elementary, had originally been receiving short notes with bible verses from his mother, Christina Zavala, packed with his lunch. After sharing the notes with his friends, he received requests from his friends for their own bible verses. His mother complied and provided additional bible verses for her son's friends and included short stories for context.

When one child shared one of these notes with the first-grade teacher, telling her, "this is the most beautiful story I've ever seen," the teacher intervened. After publicly rebuking the Zavala boy, she called Mr. and Mrs. Zavala and, invoking separation of church and state, told them that their son was not allowed to share bible verses on school grounds. The teacher was unimpressed with Mrs. Zavala's correct interpretation of the Establishment Clause and stated that if they wanted to share bible, it would have to be outside the school gates.

According, Mrs. Zavala and her son proceeded to hand out bible verses and stories to her son's friends at the school gate for a brief period after school let out. According to the Zavala's many children congregated to receive the stories.

On May 9, 2016, when Mr. Jaime Zavala came to pick up his son and distribute bible verses, he was approached by School Principal Pagliagro. Pagliagro told Mr. Zavala that it was "against school policy" to hand the bible notes out at the school gate and they would have to move onto the sidewalk, which was a "public place." Jaime and his son complied and soon returned home. It was at 4:30 pm on that day that the LA Deputy Sheriff knocked on their door, telling them the school had called to report that the child and his parents had been sharing papers at school and that this was not permitted.

Mr. and Mrs. Zavala then approached Liberty Counsel, a non-profit litigation, education, and policy organization who specialize, in part, in matters of religious freedom. Liberty Counsel undertakes to educate school districts in correct interpretation of the clause establishing separation of church and state. The Palmdale School District has been served a letter from Liberty Counsel informing them that pupils of public schools have the right to exercise freedom of speech, including but not limited to, distribution of printed material. Expression can only be prohibited that is obscene, libelous or slanderous, and constitute a clear and present danger of commission of unlawful acts.

It is not uncommon for schools to misconstrue their duty and, in the process, restrict students' freedom to exercise religion.

Any child has the right to do what this boy did. If someone was talking about the Koran to my child, I would use that as a moment to teach why we believe as we do. It's important to note that his classmates were asking him for the Bible verses. Nothing was being forced on anyone.

Would the author of this article feel the same way, and would take exactly the same position if a Muslim kid had been passing out stuff from his Koran? I seriously doubt it. Christians support the right to free speech almost always when it is their ox being gored. The teacher advised the kid to do it off the school grounds. What was wrong with that? The school has other priorities than indulging in someone's desire to purvey their own religious stuff on school property.