Exceptional Minds 2016 Graduates, An Achievement for All Young Adults with Autism 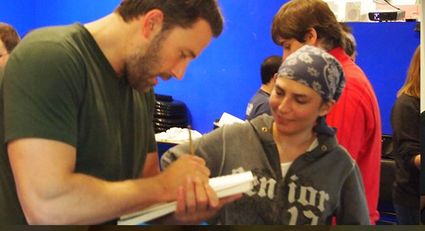 Second-year student Annie Leffe with actor Ben Affleck during his recent visit to the school and studio.

Sherman Oaks, California – June 7, 2016 – It was an achievement for all parents of a young adult with autism when 21-year-old Noah Schneider stepped up on the stage Sunday afternoon to receive his diploma from Exceptional Minds, a vocational school for young adults on the autism spectrum.

Noah is one of ten in the Exceptional Minds graduating class of 2016 and the inspiration for the vocational school, which was co-founded by his mom and other parents to help prepare their children with autism for careers in the visual effects and animation industries.

For Noah and his fellow graduates, who are also in their 20s and on the autism spectrum, this day marks the end of their formal training and the beginning of their professional careers in the competitive fields of animation and/or visual effects. "Even though I have autism, I can still follow my dreams," said Noah, who, like many diagnosed with autism, had not been expected to achieve independence or to pursue a fulfilling career from a young age.

Since the studio opened less than two years ago, it has completed animation or visual effects and end title projects for more than 50 productions, including Game of Thrones, The Knick, Vinyl, Captain America: Civil War and Avengers: Age of Ultron and for animation producers such as Cartoon Network and Sesame Street.

Graduate Michael Yochim will begin his career in digital animation as an intern at Nickelodeon following Sunday's graduation, joining four Exceptional Minds alumni who currently work in the field at Marvel Studios, Stargate Studios and Mr. Wolf. "There's not many places that give you a job right out of school," said Michael.

There to give the graduates their diplomas and a few words of wisdom was Richard Gasparian, Animation Timing Director for The Simpsons. "I looked up the word 'exceptional.' (It means) not ordinary. Outstanding. One-in-a-million. Different. You guys are different. You've heard that many, many times. But guess what? That is your secret weapon," he said.

Also offering a few words of encouragement was actor Ed Asner, who is a founding advisor for the school and an outspoken autism advocate with a son and grandson on the spectrum. "I know your contribution to the world will be priceless," said Asner, via remote feed.

Exceptional Minds opened its doors in 2011 with a first-year class of nine students and now has 30 fulltime students, 38 part time students and more than a hundred summer enrollment students. "Never doubt that a small group of thoughtful, committed citizens can change the world," said Exceptional Minds Co-founder Yudi Bennett, quoting Margaret Mead during Sunday's graduation. Bennett, who is Noah's mom, expects Exceptional Minds to be an inspiration and model for more schools providing instruction and opportunity for young people with autism.

The school is a nonprofit organization funded privately through tuition, foundations and grants. Preceding graduation on Sunday, the school and its students honored Corinne Nevinny, founder of LMN Ventures; and Dr. Ricki Robinson, who has been actively involved in autism since 1990 and is the co-director of Descanso Medical Center for Development and Learning in La Canada, California, with an "Exceptional Hero Award" for their philanthropy and dedication to the school. Recently, Dr. Robinson and the students of Exceptional Minds worked on an interactive webcast series, Profectum Parent Toolbox (PPT), to help parents interact with their child with autism.

More than a half-million individuals with autism will enter adulthood in the next decade, the vast majority of whom are ill prepared for meaningful employment. Exceptional Minds is the first and only school of its kind to prepare young people with autism for careers in visual effects, providing well-rounded instruction in soft skills and technical skills as well as job placement and work environment preparedness. 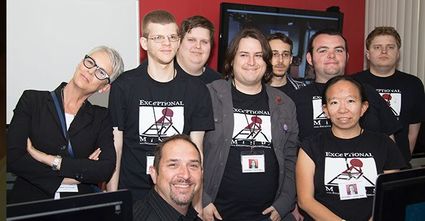 Exceptional Minds has many friends in the movie industry, as you'll see in the photo of Jamie Lee Curitis with last year's graduates.

About Exceptional Minds (http://www.exceptionalmindsstudio.org): Exceptional Minds is a non-profit vocational center and working production studio for young adults on the autism spectrum. It was chartered in 2011 to provide the training necessary for creatively gifted individuals with Autism Spectrum Disorders (ASD) who may not otherwise be able to make the transition from high school to careers. Exceptional Minds offers technical proficiency and work readiness training that prepares students for careers in graphic arts, animation, visual effects, rotoscoping and end title credits. Located in Sherman Oaks, California, Exceptional Minds is both an instructional learning facility and a working studio with hands-on student involvement in production projects, many for the film industry.

Exceptional Minds has many friends in the movie industry, as you’ll see in the photo of Jamie Lee Curitis with last year’s graduates. Second-year student Annie Leffe with actor Ben Affleck during his recent visit to the school and studio