An uproar from animal rights groups will no doubt follow 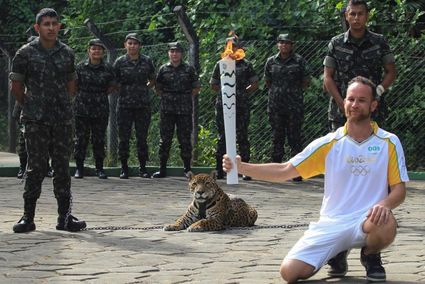 A Jaguar named Jumo was the mascot of the Brazilian national team.

6/21 (Reuters) - A jaguar featured at an Olympic torch ceremony was shot dead by a soldier shortly after the event in the Brazilian Amazon city of Manaus as the animal escaped from its handlers, an army statement said.

The jaguar was killed on Monday at a zoo attached to a military training center where the Olympic torch ceremony was held. A soldier fired a single pistol shot when the escaped animal, despite being tranquilized, approached the soldier, the army said.

"We made a mistake in permitting the Olympic torch, a symbol of peace and unity, to be exhibited alongside a chained wild animal. This image goes against our beliefs and our values," the local organizing committee Rio 2016 said in a statement.

"We guarantee that there will be no more such incidents at Rio 2016," the committee added.

A cartoon smiling yellow jaguar known as Ginga is the mascot of the Brazilian Olympic team.

The jaguar is a near-threatened species that is already extinct in Uruguay and El Salvador, according to the International Union for Conservation of Nature.

The shooting caused uproar among animal rights groups, which pointed to the recent killing of a gorilla at a Cincinnati zoo and alligators at Walt Disney World in Orlando as evidence of flawed policy towards wild animals. Many questioned why the animal was involved in the Olympic event.

"When will we learn? Wild animals held captive and forced to do things that are frightening, sometimes painful, and always unnatural are ticking time bombs - our actions put them and humans at risk," Brittany Peet, director of captive animal law enforcement at People for the Ethical Treatment of Animals (PETA), said in a statement.

"When will people (and institutions) stop with this sick need to show power and control by confining, taming and showcasing wild animals?" it said on its Facebook page.

The use of Juma, as the jaguar was known, at the event was also illegal, according to Ipaam, the Amazonas state government environmental authority that oversees the use of wild animals.

"No request was made to authorize the participation of the jaguar "Juma" in the event of the Olympic torch," Ipaam said in a statement. Ipaam said it is investigating the incident.

The jaguar (Panthera onca) is a big cat, a feline in the Panthera genus, and is the only extant Panthera species native to the Americas. The jaguar is the third-largest feline after the tiger and the lion, and the largest in the Americas. The jaguar's present range extends from Southwestern United States and Mexico across much of Central America and south to Paraguay and northern Argentina. Apart from a known and possibly breeding population in Arizona (southeast of Tucson) and the bootheel of New Mexico, the cat has largely been extirpated from the United States since the early 20th century.

This spotted cat most closely resembles the leopard physically, although it is usually larger and of sturdier build and its behavioral and habitat characteristics are closer to those of the tiger. While dense rainforest is its preferred habitat, the jaguar will range across a variety of forested and open terrains. Its preferred habitats are usually swamps and wooded regions, but jaguars also live in scrublands and deserts. The jaguar is notable, along with the tiger, as a feline that enjoys swimming. The jaguar is largely a solitary, opportunistic, stalk-and-ambush predator at the top of the food chain (an apex predator). It is a keystone species, playing an important role in stabilizing ecosystems and regulating the populations of the animals it hunts. The jaguar has an exceptionally powerful bite, even relative to the other big cats. This allows it to pierce the shells of armored reptiles and to employ an unusual killing method: it bites directly through the skull of prey between the ears to deliver a fatal bite to the brain.

The jaguar is a near threatened species and its numbers are declining. Threats include loss and fragmentation of habitat. While international trade in jaguars or their parts is prohibited, the cat is still frequently killed by humans, particularly in conflicts with ranchers and farmers in South America. Although reduced, its range remains large. Given its historical distribution, the jaguar has featured prominently in the mythology of numerous indigenous American cultures, including those of the Maya and Aztec.

Legal action by the Center for Biological Diversity led to federal listing of the cat on the endangered species list in 1997. However, on January 7, 2008, George W. Bush appointee H. Dale Hall, Director of the United States Fish and Wildlife Service (USFWS), signed a recommendation to abandon jaguar recovery as a federal goal under the Endangered Species Act. Critics, including the Center of Biological Diversity and New Mexico Department of Game and Fish, were concerned the jaguar was being sacrificed for the government's new border fence, which is to be built along many of the cat's typical crossings between the United States and Mexico. 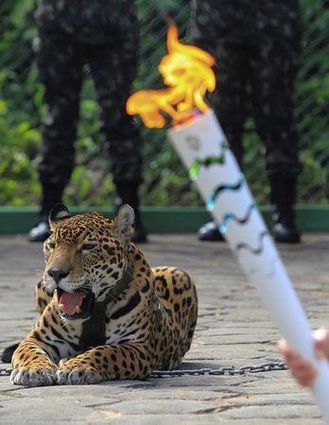 After he escaped from his handler, Jumo was shot by a soldier

On March 4, 2014 Federal wildlife officials set aside nearly 1,200 square miles along the U.S.-Mexico border as habitat essential for the conservation of the jaguar. The reservation includes parts of Pima, Santa Cruz and Cochise counties in Arizona and Hidalgo County in New Mexico.

In September 2015 the jaguar "El Jefe" was photographed via camera trap and analysis of his spots confirms that he has been in southeastern Arizona (30 miles south of Tucson) since 2011. Jaguars have been present in this region every year since 1997. El Jefe and other males may have originated from a breeding population in Sonora, Mexico, 125 miles (200 kilometers) to the south of Tucson.