A 12-year-old girl is forced to confront adulthood when she unexpectedly has her first period. 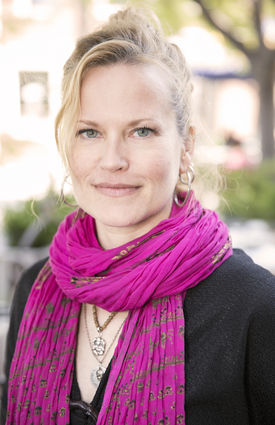 "Girl Flu." writer and director Dorie Barton poses for a photograph outside the Culver Hotel on June 7, 2016.

The Santa Monica Observer was privileged to interview Dorie Barton, writer and director of the new hit comedy, "Girl Flu.", which premiered on June 6 at the Los Angeles Film Festival, and was so successful that the festival added a second screening.

"Girl Flu." is a female-driven coming-of-age film about a 12-year-old girl named Bird who is forced to confront adulthood when she unexpectedly has her first period. While the film is, in many respects, a lighthearted comedy, it also delves into the multifaceted reality of growing up. The film stars Jade Pettyjohn, Katee Sackhoff, Jeremy Sisto, Heather Matarazzo, and Judy Reyes. The film's writer and director, Dorie Barton, is known for her work as an actress on the TV show "One Life to Live", as well as in the films "Meet the Fockers" and "God Bless America".

OBSERVER: How did the idea for "Girl Flu." come about?

DORIE BARTON: Some stories come to you all in one piece -- you receive them as a whole. This was not like that. I got the idea... almost as a challenge to myself. I wanted to see if I could write a whole movie about the process of getting your first period. Usually periods are used in movies as a punchline... a dumb joke. It is meant to humiliate people. That's usually our cultural reference for menstruation. It's something evil, horrible, humiliating, disgusting... it's never really given its due. And even when it is treated as a passage of life, it's just a piece of the story and I really wanted to know what it would look like to actually dive in there and go through that whole week of getting your first period.

OBSERVER: Why did you decide to tell your story from the first-person perspective of a 12-year-old girl?

DORIE BARTON: Part of what I wanted to do when telling this story, besides creating an entertaining, enjoyable, fun movie, was to show people how young girls are when they have to deal with something so adult and so life changing and so potentially traumatic. It's young girls who are dealing with figuring out how to manage their period -- not grown women. It's not an adult subject. But you look at the instructions for tampons -- there's a shot of that in the film -- they are not written for twelve-year-olds. Those pictures aren't friendly. They're incredibly graphic and disturbing! But the person who needs to read instructions for a tampon is gonna be a twelve-year-old -- that's the average age when girls get their first period. I made a point of including some shots of Bird in the film where she looks so young. And I really think that it's important for people to see that. This is something that we really need to help our young women through -- to normalize it and laugh about it if we can, and cry about it if we need to, but yeah, we're children when we do this.

OBSERVER: What is the significance of the different male characters in your story?

DORIE BARTON: Every single male character in the film represents a different place on the spectrum of how capable a man is in dealing with women and dealing with menstruation. The male figure in the film that is most capable of dealing with that is [the young male love interest] Carlos. He has sisters. He's cool with it. It's fine with him. He tells Bird that it's okay. Then we have Arlo [Bird's mother's late-30s boyfriend], who's not that comfortable with it, but he's trying so hard to be supportive. He's doing his best. At the very bottom of the spectrum there is a teenage boy, Dominic, who is so disgusted by menstruation that he thinks Bird will [go nuts and] burn down the school.

OBSERVER: What was the importance of having a teenage female bully in the film?

DORIE BARTON: I think she's a girl who didn't get the right kind of support and getting her period pissed her off to the point where she really never made peace with it. So as bullies often do, they use other people's vulnerabilities against them, which is really just a projection of their own insecurities.

OBSERVER: How long did it take to shoot the film? 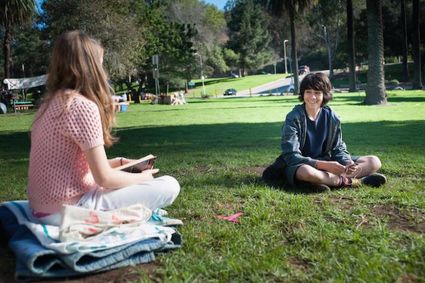 DORIE BARTON: We had nineteen days, which is pretty average for a low-budget film. But one of the interesting things about this particular film that I think is even more impressive is that we were working with a lot of young actors and those young actors had to be in school for a portion of every day. They are not on set twelve hours a day. They have rest time and school time. So a day on our film -- we would be there for twelve hours -- but actual shooting time with our young actors was about seven hours. So very different than a film with actors who aren't going to school at the same time. All these amazing young actors are balancing so much more than just making a film. It's kinda remarkable.

OBSERVER: So "Girl Flu." had a smash premiere at the LA Film Festival. What other films do you have on your horizon?

DORIE BARTON: I'm writing a dark, sexy thriller right now with some really awkward comedy in it. I think I will probably always write with awkward comedy. I'm quite sure I will always write about complicated women. I have several scripts on the horizon. I think I need to go away on a sabbatical for a while and dig into a hotel with some really good room service and see what I can emerge with.

OBSERVER: Looking forward to it. Best of luck with "Girl Flu." It has been a pleasure.