What Bonobo and Dolphin Sexuality Teaches Us about Humans

Are the sea otters evil rapists, just as ruthless as their human counterparts? 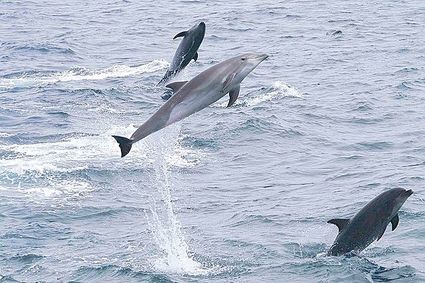 I'm going to say it. The "s" word. Don't laugh. Please don't tell on me. It's the iron core of our flesh-and-blood universe as living beings. It's also the source of countless thousands of detentions, imprisonments and giggles in seventh grade biology classrooms. It's the perfumed breath of all our timeless stories as they rush us like wind to the climax of our lives.

It's also the reason human populations have been assembled into strict, competing categories and has caused far too many lives to be tragically destroyed by suicide, depression or just plain inhumanity. The "s" word, the dreaded, the venerated: SEX.

There, I said it. If a bonobo chimp was reading this, she or he would probably emit a sigh and an eye roll before clicking that red "x" in the corner. Seriously. If you think seventh graders are immature about the subject of skin-to-skin contact in certain bodily areas, think how ridiculous all humans must look to our more seasoned taxonomic ancestors. While we've been battling over which gender gets to touch which body parts, and how best to refer to the living anomalies that don't fit into our neat little grids, and crying ourselves to sleep because we lie on one side or another of the doom of monogamy, most advanced creatures have this whole gender-sexuality thing running perfectly smoothly.

Take bonobo chimps. While they share 98.7% of their DNA with humans, their love lives are 98.7% less stressful than ours. Wikipédia reports that an estimated three quarters of bonobo flings are unrelated to producing progeny. The society also enjoys the freedom of a pansexual paradigm. Regardless of which equipment an individual has, they may couple up with another.

This often serves to maintain communal peace, particularly when two parties of unequal social status approach one another. Sexual episodes have even been recorded between adults with a baby calmly cradled between the two lovers. However, life isn't all an orgy for these intelligent primates. Incidences of sexual contact last about fifteen seconds, on average – after which everybody gets on with their lives. If humans could resolve political tensions and satisfy carnal cravings in fifteen seconds flat, think how many fewer wars we'd have. Not to mention alleviating the need for seventh-grade sex ed, since all babies would be well versed in how their parents' generation had done it.

We can surmise that animals other than humans don't have a problem with feeling and fulfilling sexual needs as part of a larger spectrum of social functionality. Dolphins, known to be one of the most gregarious groups of animals on Earth, also engage in non-reproductive intimate contact. Males and females will willingly couple up outside of the female's reproductive period, suggesting that both individuals experience pleasure from physical contact.

While humans have long assumed animals are programmed to impregnate one another by some Darwin code, these particular animals willingly dive outside the zeros and ones of "doing it." Furthermore, within dolphin society, it is common for two males to become fast friends, roaming the seas together and collaborating to get girls once baby-making obligations do come up. In the interim, these males will engage in physical bonding, including stimulating one another's genital area with their own rostrum ("beak") or flipper.

It seems possible these dolphins understand the concept of give and take. Clearly they can predict that inducing pleasure in a partner will lead to future pleasure for themselves and help solidify a beneficial relationship. Who knows what other sexual activities dolphins may engage in that parallel or surpass humans' level of interpersonal manipulation and connection through intercourse? Maybe they withhold pleasure from a partner until some other obligation is fulfilled. However, since dolphins are very polygamous, it is unusual to find an individual pining and carrying on because his or her partner cheated. These cetaceans live in the moment – and boy, do they live.

Alas. As in human society, animal sex is not always pleasant for both parties, even in advanced mammals. For instance, recent reports of sea otters raping juvenile harbor seals have wrenched outcry from all kinds of sensitive people. The male otters, desperate to carry out their urge to reproduce, and unable to find sufficient females in the areas highly compromised by human boat traffic and pollution, force themselves onto the smaller baby seals, who are often left torn apart or dead after the encounter. Needless to say, these episodes do not help further the populations of either amazing, troubled species, nor do they further social ease within and between genera. 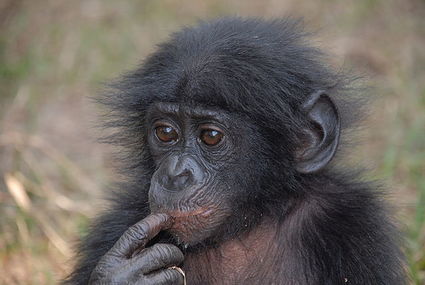 Caption: Even young bonobos are more mature about the concept of sexual intercourse than are most of us "civilized" humans.

Are the sea otters evil rapists, just as ruthless as their human counterparts? An argument could be made that some of the same issues are at play here. The otters are stressed, perhaps driven to "madness" by unnatural pressures that threaten their ability to conduct their social and biological lives in peace – maybe dangerous human criminals are also not entirely to blame for the events leading up to the horrors they commit on others, when urban stress, poverty, peer pressure, mental disorders and other issues are taken into account. Of course, this does not make it acceptable for a society to sit back and let its innocents endure sexual trauma. However, all of these phenomena, from the bonobos to the dolphins to the otters, raise some important questions about the taboo foundation of human and other life. Among them: Can we change our age-old sexual prejudices? Would this improve our social and political connections? What is our impact on interpersonal love within the once-thriving cultures throughout the animal kingdom? Which definition of sex is going to dominate the planet in the generations to come? What the heck is gender? And most importantly, will humans ever grow up so as to promote life without pain?

What about instances of male dolphins taking females hostage? Or stories of male dolphins losing it and murdering other members of their own species? What about stories about monogamous life partners in various bird and some reptile species? If other animals can tell us ANYTHING it is that what works for one doesn't always work for others. We are all individuals and respond to various emotional environmental and genetic pressures.

Furthermore, research into the significant amount of neurological development that takes place during puberty and the role of dopamine, vasopressin, oxytocin and other hormones in activating and facilitating the development of the key regions of the brain would suggest that social pressures against the naturally occurring, biologically based sexual desires of youth is counterproductive to the development of the socially oriented brain.

Rilling and his team concluded that the more highly developed neural system [of bonobos] not only supports increased empathic sensitivity, but also behaviors like sex and play that serve to dissipate tension, thereby limiting distress and anxiety to levels conducive with prosocial behavior. http://scan.oxfordjournals.org/content/early/2011/04/04/scan.nsr017.full

Kudos Sabine and the Santa Monica Observer for having the courage to put these thoughts into print! I was not aware of the dolphin research but I have studied the bonobo research closely and have worked to relate it to research in human developmental biology. James Rilling did a comparative neurology study of bonobos and chimpanzees and found substantial differences in the right dorsal amygdala and right anterior insula; areas that are closely linked to social cognition.