Do the Fish, Whale Shark and Octopus in Finding Dory Behave Like Real Fish?

Hank the Octopus Probably Couldn't Drive a Car, But Would Want to be Released 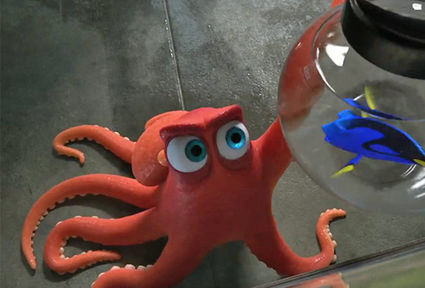 Hank the Octopus from Finding Dory has squishy arms; would want to escape

"Hands! Hands!" Trembling with fear, the purple pickles burrow under the sand to wait out the plunging, poking, wrenching storm that is a sea of children crowded around a touch tank. If you've seen Disney-Pixar's new release "Finding Dory," you know which scene I'm referring to. But is this really how sea cucumbers feel about kids at touch tanks? In this article, I will expose some interesting facts about the characters in the movie, as they would function and behave in real life.

Hank the octopus is a wonderful ambassador for his species (indeed, for the entire order Octopoda). Aside from a few obvious hitches (no, octopuses do not have big puppy-dog eyes; nor can they turn themselves mustard-yellow at will), many of the basic principles of Hank's abilities reflect the facts, to some extent. Research suggests that octopuses, while they only live about four years in captivity, have complex memory systems with some of the same neural functions that allow humans to store knowledge. In "Finding Dory," Hank is troubled by post-traumatic stress due to an encounter with a child that cost him a tentacle. He's wrong there: Octopuses have arms; "tentacles" are the two spade-tipped appendages squid use to spear prey.

Hank also overcomes his chronic anxiety and manages to pilot a stroller and later a freight truck. Regardless of motivation, could a real-life cephalopod manipulate a heavy human vehicle? The answer is cooler than you might expect. Octopuses can stay out of the water for 20-30 minutes without losing their breath or shape. Furthermore, they are known to use a wide variety of tools, from the tiny veined octopus David Attenborough documented collecting two halves of a coconut shell to make a shelter, to the research specimen that stole a photographer's camera and turned the lens on the photographer! But could they drive a car, or even a manual stroller?

Probably not, says marine biology professor Ken Halanych. For one thing, the octopus can only mimic objects or perform behaviors it has observed firsthand and practiced. Most octopuses will never take a driver's-ed class. Also, remember that this invertebrate is fairly delicate, able to be ripped apart by the twirling motions of a hungry eel. Dragging its arms across a rough sidewalk, wracked with garbage, birds and shoes, would soon turn any healthy octopod into a gruesome puree.

A final note on the octopus: Hank is desperate to avoid his scheduled "humane" release back to the ocean. Instead, he wants to escape to the Cleveland Aquarium to live the rest of his days in safety. Do octopuses like being kept in aquariums? On the one hand, they aren't migrating creatures, and if the enclosure provides a place for them to hide and sufficient entertainment they seem happy. However, no octopus has ever written a testimonial to promote an aquarium, and they are well known escape artist – one flooded Heal The Bay's entire floor last year, and Inky's escape from the National Aquarium of New Zealand is still fresh in everyone's mind!

On the opposite side of the size spectrum from the squishy octopus is the venerable whale shark. It's not a whale. It is a shark. Nonfunctional teeth and a plankton-based diet do not make Destiny the Rhyncodon typus a whale, as much as she likes to call herself one.

As for keeping whale sharks in aquariums – it's of course a controversial subject. Several aquariums in Japan, China, Taiwan, Mexico and Dubai, as well as the Georgia Aquarium in the United States, have kept whale sharks on display.

The Georgia Aquarium defends this practice: Chief Science Officer Bruce Carlson mentioned in an interview with Why Sharks Matter that the whale shark tank is large enough for several feeding boats to navigate (much more spacious than Destiny's hovel in "Finding Dory"); furthermore, some (unstated) amount of revenue is used to fund research projects, including studying wild whale shark populations off Mexico.

Of course, there's always the argument of keeping a "Noah's Ark" captive population of rare animals in order to restore wild stocks if need be. However, the number of whale sharks currently maintained at aquariums is far too limited to produce enough offspring of sufficient genetic diversity to grow a healthy population. No human has ever observed whale sharks' reproductive processes, so captive breeding is obviously not currently being undergone by any institution. In fact, very little is known about these long-lived creatures, which may suffer shorter lifespans if captive conditions aren't close enough to their enigmatic lives in the wild.

One might argue that a captive whale shark is an ambassador for its species, protecting the majority of sharks that remain in their wild homes. But in light of the growing popularity and accessibility of ecologically-sensitive tourism and volunteering abroad, not to mention the vast and growing variety of digital or virtual-reality opportunities to swim with whale sharks, the argument for an ambassador behind glass seems to grow weaker. Any way you slice it, these endangered, mythic beasts are still being killed for meat, as well as killed off indirectly by the widespread effects of oceangoing oil tankers, abandoned fishing nets, and all those other wonderful things humans leave lying around the whale sharks' home turf. Unlike in the movies, there aren't always clean happily ever afters or right versus wrongs in the conservation field.

And now for our featured question: do sea cucumbers in touch tanks shake with dread of human hands? Probably. It depends on how you touch them. As a touch tank babysitter, I've seen people treat the animals like sexualized potatoes, but I've also seen some very gentle, responsible two-fingered one-way stroking that doesn't seem to phase the invertebrates at all. It's hard to know if they will ever fall in love with a six-year-old girl as much as she falls in love with them, undoubtedly talking her mother's ear off about the cute animals she petted hours after being torn away.

But that encounter, and many like it, will live on in my memory and in those of the guests that came away a bit more interested in obscure marine creatures. Like all display of animals, the touch tank is wracked with issues and will continue to evolve or even be replaced by showing off these animals in their natural milieu. Meanwhile, just touch them carefully and try not to pull off their tentacles! 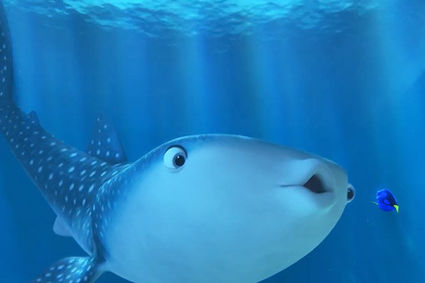