Herbie the Beetle, Walter White's Pontiac Aztec from "Breaking Bad," and the Batmobile All Await You 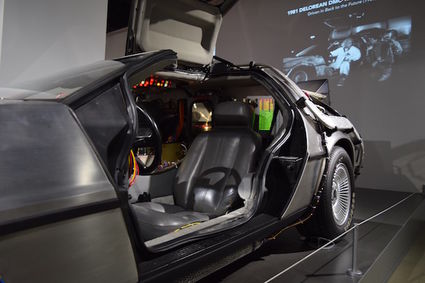 The cars are strikingly beautiful symbols of affluence with such iconic vehicles as a 1954 Ferrari 375 MM Scaglietti Coupe, 1933 Duesenberg Model SJ Arlington Torpedo, and a McLaren F1. Next, a display is arranged specifically for the evolution of the motorcycle, showing bikes from their conception up until modern superbikes such as the Kawasaki Ninja

When you first approach the Petersen automotive museum, its unique appearance gives the museum a strikingly modern aesthetic. The giant silver ribbons on a bright red background make the building stand out among the other drab buildings surrounding it The ribbons create an effect that makes the museum appear to be moving.

This modern façade, designed by the architectural firm Kohn Pedersen Fox, belies the interior of the building, which is filled primarily with relics from motoring history. Take, for instance, the entrance: you are immediately greeted by a pristine 1925 Rolls Royce Aerodynamic Coupe, an amazing example of motoring days long gone.

Looking to to your left, you are greeted by one of the few modern cars showcased in the museum, a McLaren P1, a "hypercar", so called due to its speed, exclusivity, and jaw dropping price tag. There is also a small gift shop with car manufacturer branded clothing, painstakingly constructed models of many of the cars seen in the showrooms, and other car themed items. I bought my tickets online, so after showing them to the ticket desk I was given a small sticker to put on my shirt, and told that the best way to go through the museum was to start at the third floor.

The Petersen is a unique museum. As a self-proclaimed car nut, but not quite a gear head, I appreciate the history behind automobiles and their impact on the city we live in.

On the third floor of the museum, this legacy of the car on Los Angeles, and the world in general, is explained through several exhibits. You can see some of the early attempts at automobiles, and many vehicles that were landmarks for their era. The model T is presented front and center with other, lesser-known vehicles (like the Mercer Type 35-J), which greatly impacted early car culture.

Another important part of this floor is the movie car section. Herbie the Beetle, Walter White's Pontiac Aztec from "Breaking Bad," and the Batmobile are just a few of the famous cars featured in this section. An interactive section shows important locations across Los Angeles and their significance to car culture, such as raceways and streets, and explains to you the history behind them.

Walking down the spiral staircase to the second floor opens up to a more modern collection of cars and motorcycles. This floor, aptly named "Industry" shows how cars have shaped social, economic, political, environmental landscapes, for better or worse. It houses an exhibit on racing, showcasing a plethora of racecars, and includes a section on the evolution of the motorcycle.

Towards the rear of the floor, a section devoted to cars that run on sustainable fuel describes all the different types of fuel humans have attempted to put into cars, with varying degrees of success. Hydrogen cars, the first electric car, and compressed natural gas cars are the central attraction, as well as an interesting display on the different kinds of fuel pumps used for each one. Going clockwise around the floor from there is the Precious Metal section, probably my personal favorite. The Rolex sponsored room is an homage to cars that were famous for their silver paint job.

The cars are strikingly beautiful symbols of affluence with such iconic vehicles as a 1954 Ferrari 375 MM Scaglietti Coupe, 1933 Duesenberg Model SJ Arlington Torpedo, and a McLaren F1. Next, a display is arranged specifically for the evolution of the motorcycle, showing bikes from their conception up until modern superbikes such as the Kawasaki Ninja.

A section dedicated to racecars, an area detailing the process of designing new vehicles, and an amazing comparison between the original Ford GT 40 and the brand new 2017 Ford GT also define this floor. 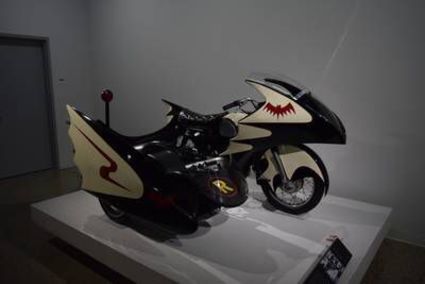 The cars are strikingly beautiful symbols of affluence with such iconic vehicles as a 1954 Ferrari 375 MM Scaglietti Coupe, 1933 Duesenberg Model SJ Arlington Torpedo, and a McLaren F1. Next, a display is arranged specifically for the evolution of the motorcycle, showing bikes from their conception up until modern superbikes such as the Kawasaki Ninja

The final floor is titled "Artistry" and is entirely dedicated to the emotion behind cars and the contemporary understanding of automobiles as moving art. Describing the vehicles here would do them no justice. Their sweeping forms and impeccable paint jobs, the fresh smell as if you've walked into a time capsule and were looking at the car-world's-greatest-hits all make this floor an impactful finish. That is, if you haven't booked a vault tour.

The vault tour is incredible as well, but much more appreciated if you are not only a car nut, but a gear head as well. The tour guide that led us was an engineer who worked on many of the cars in the vault (ranging from mint condition Model Ts to dragsters to parade limos), and had incredible technical knowledge of the cars, but didn't elaborate on what most of the terms he was talking about meant. I would recommend this only if you are into cars and how cars work.

Beginning to End, the Petersen Automotive museum was an incredible experience. We don't realize how much cars and motorcycles have influenced our world, and our society, especially here in Los Angeles. This museum not only exhibits that influence, but places it proudly on display, with a plethora of cars and motorcycles. From the moment you walk in, to the moment you leave, the Petersen will have your heart racing the entire time.