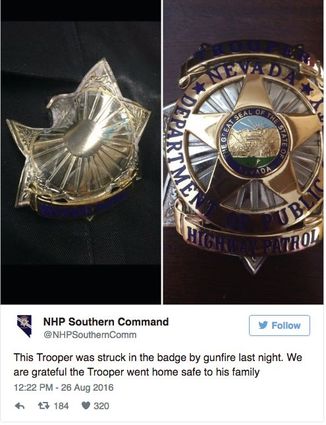 About once every five years, a policeman in the US is saved by his badge, when the badge deflects a bullet. The last time was in New York City in 2010, reporte the New York Times. Last night, however, it happened to two different policemen in two states.

In Huntington Beach, California, officers were involved in a high-speed pursuit when gunfire broke out. A 10-year veteran of the Huntington Beach Police Department had bullets shoot through his windshield and strike him. But his badge stopped the bullets. The suspect veered off the road, crashed his vehicle and died of his injuries.

In Las Vegas, a Nevada State Trooper was conducting a traffic stop when the suspect began to flee the vehicle. During a foot pursuit, gunfire broke out and the trooper was struck in the chest. His badge saved him. The suspect died in the gunfire exchange.

Nevada Highway Patrol has released a photo of the badge that stopped a bullet from hitting one of its patrol officers on Friday morning.

This Trooper was struck in the badge by gunfire last night. We are grateful the Trooper went home safe to his family pic.twitter.com/q3PfF5j4P4

A Nevada Highway Patrol trooper has been shot near U.S. 95 and Boulder Highway, reported KTNV Friday night. The incident began as a traffic stop near Boulder Station. Police say that they stopped a car containing 3 people, two men and a woman. 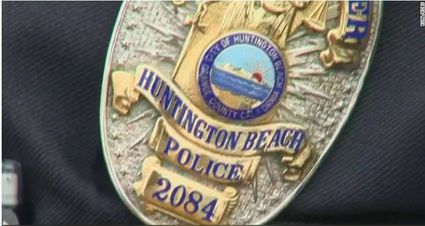 One of the men jumped out of the car and began running. The NHP officer began chasing him. A gunfight broke out and the officer was hit in the chest. The man who ran was also hit. He did not survive.

Boulder Highway is currently closed in the area of the shooting. Motorists should take alternate routes. Las Vegas police are assisting NHP with their investigation.

It started as a traffic stop. Three people were in the car. Two are now detained. @KTNV pic.twitter.com/ZSHnZUyHdp