A 26 months old baby that can play tennis with the same technique like Rafa Nadal! 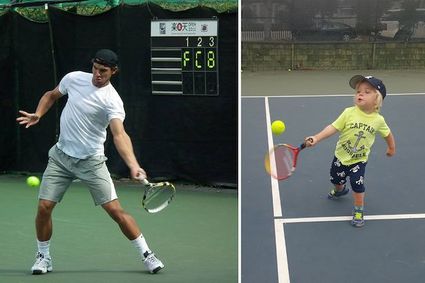 Beverly Hills Tennis Academy has created the impossible possible! A 2 year old (26 months old) baby can literally play tennis! It took more than 30 years to a USPTA Elite Tennis coach Roger Zamudio to proof his theory that a 2 years old baby can learn how to play tennis and his Godson Noah is the living proof that it can be done! A 26 months old baby that can play tennis with the same technique like Rafa Nadal!

Noah is capable to serve, rally, volley and get over the net as many as 80 balls with out missing! But the most impressive part of his game is that he learned to make adjustments on his own in order to get the ball over the net, in other words, he is becoming an independent player that can figure our how to make changes and adjustments in his game, it will help him to win tennis matches in the future.

Tennis coach Roger Zamudio believed for many years that babies can learn how to play tennis but he never had the chance to prove it because he needed a baby to spend enough time in order to accomplish it. Finally, Noah's parents ( a friendship of more than 25 years) agreed to try it out and it did work!

Coach Roger Zamudio believes that babies think in patterns of images and we all know that their brain keeps developing until they are 3 years old, therefore, babies can amulet what they see. It takes many years of experience to find and to understand this concept because working on finding the need of the baby to motivate him to learn how to play tennis can be a fun game but there is a thin line not to overdue it because the baby may get bored and reject it. But, if its done right, it becomes a fun game for the baby and the coach. Coach Roger Zamudio taught Tennis to Noah through a series of visual exercises and have Noah next to him watching Rafael Nadal on TV from time to time.

Can this prodigy baby be the next Rafa Nadal? Time will tell.

It is more important for coach Roger Zamudio to "create good habits for Noah," he says, because, it is better for Noah to have the habit of doing sports and loving what he does than just playing computer games in his Ipad. Good habits brings in positive results in the short and long term.

Meantime, coach Roger Zamudio's goal for Noah is to have Noah enjoying been in the tennis court playing as long as Noah want. He want Noah to have the same feeling of joy playing tennis as when he is in the park play ground or playing computer games. So far so good, Noah's words to his Godfather ( coach Roger Zamudio) every time he sees him are: "Uncle Rog, let's go play tennis!" Haha, It is music to my ears his word says coach Roger Zamudio. 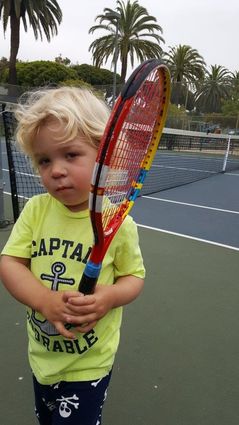 Pictures of Noah, serving, rallying, doing the volley on the beach

Coach Roger Zamudio with more than 30 years of experience as an elite Tennis Coach teaching in many parts of the World believes that he has done the impossible possible. He strongly believes that if a 2 years old baby can play great tennis, then anyone can do it, no excuse. But the reality, it takes some tennis coaching skill accomplishing to have a 2 years old baby playing tennis better many adults that play recreational Tennis, therefore, congrats to coach Roger Zamudio for waiting more than 30 years to proof his theory that Tennis is for everyone regardless of their age.

If you would like your kid or yourself to take a private Tennis Lesson from coach Roger Zamudio please contact Beverly Hills Tennis Academy at 310.592.7613 or go to their website.www.BeverlyHillsTennisAcademy.com