Panic at LAX for the Second Straight Sunday

Texan leaves stolen car in white zone; charged of possession of meth, and of a stolen vehicle. 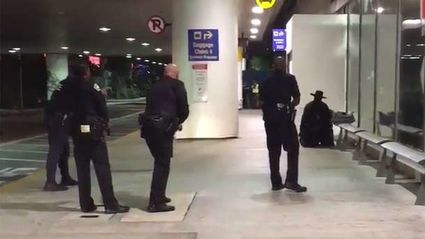 At about 9 am, Airport Police came across a stolen vehicle parked in the white zone in Terminal Three

"A small number of people even made it out onto the airport tarmac," he said.

Police decided to prescreen everyone in Terminal 3.

No one was hurt, unlike a similar panic incident last Sunday were 3 people were injured in a rush to get away from suspect bags. Someone had left the bags at the side of a seminal, but they did not contain anything hazardous.

Larry McKenney, 35, of Humboldt, Texas, was arrested on suspicion of possession of a stolen car and possession of methamphetamines in a custodial setting.

To try and control the scene, officers moved people off sidewalks and into the baggage claim. Some travelers who saw police with their guns drawn panicked and backtracked through security-screening areas. LAX officer Rob Pedragon said about 15 people left out of an emergency exit and onto a tarmac.

Police quickly brought the scared passengers back inside, and Terminal 3 was then evacuated as a precaution.

Last Sunday night's panic, during which passengers breached security doors and spilled out onto the airport tarmac, was sparked by law enforcement detaining a man in a Zorro costume as well as loud emergency locks that sounded like gunshots, officials told ABC News today. 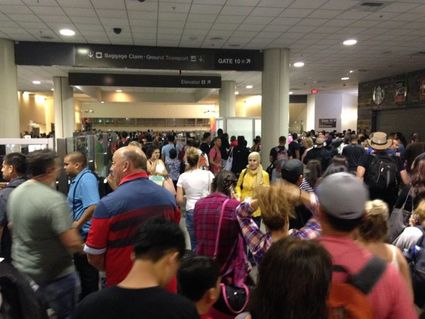 Chaos erupted at the airport after word of a shooting threat spread -- later deemed a false alarm. But the false alarm brought travel to a halt and caused delays to pile up into Monday morning.

According to two officials briefed on the investigation, it began when a street actor in a Zorro costume was at the airport picking up a friend.

Law enforcement at the airport became suspicious of him and detained him to for questioning -- in full view of people moving through the busy Terminal 7. A small crowd saw the questioning and some of those people began rushing away from the area for fear that this was a security incident in progress, the officials said, and one passenger notified a senior TSA official that there was a security incident ongoing in the terminal.