"When you pay people a better wage," says Jackson, "more people are willing to do the work." 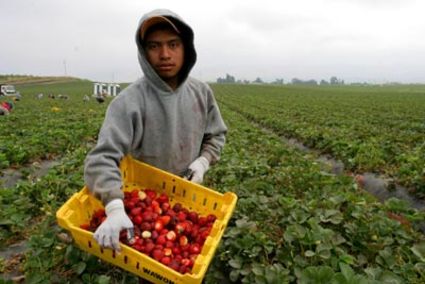 California has become the first state in the US to pay agriculture workers overtime pay. At $10 an hour overtime and $7.25 minimum wage, these strawberry pickers are by far the best paid farm workers in the U.S.

California Governor Brown has signed a bill to give farm workers overtime pay. The state will become the first in the nation to grant agricultural workers the right to collect overtime pay when the bill takes effect in 2019. Currently, California is one of only five states where the minimum wage, $10/hour, is greater than the federal minimum wage of $7.25/hour.

Assembly Bill 1066 will phase in the wage increases over the four years beginning in 2019. For farmers with 25 employees or less, there will be a delay of an additional five years for the increases. The bill was the brainchild of the United Farm Workers, an agricultural worker union founded by Cesar Chavez and now active in 10 states.

During seasons of harvest, hours for farm workers are usually longer. This requirement has been the reason given for exempting farmers from having to pay overtime in the past. The farm workers, however, believe they should be accorded the same protections under the law as workers in other industries. As reported by the Pacific Coast Business Times, Roman Pinal, regional director of the UFW, said, "Every industry has figured out how to usher in the 8-hour day and to compensate their workers time and half when they demand, when they require, more time."

The Western Growers Association, representing the state's farmers, are less sanguine about the new law, believing that with increased cost in wages, California may be pricing itself out of the market for food production. 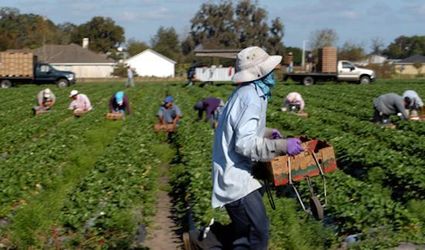 California has become the first state in the US to pay agriculture workers overtime pay. At $10 an hour overtime and $7.25 minimum wage, these strawberry pickers are by far the best paid farm workers in the U.S.

Matthew Allen, director of California government affairs for the WGA said, "Our folks are very subject to the international marketplace and other pressures so it's not as easy as saying they'll pay the cost increase for the overtime." In fact, Allen noted, the average age of farm owners is rising toward retirement. He posited that some owners might decide to cease farming and sell their land rather than work in a decreasingly profitable environment. "This is a question of how difficult will we continue to make it for our farms to remain viable and successful in California, both in conventional and organic growing."

California growers already suffer from a multi-year drought, pest threats, multiple pesticide and fertilizer regulation, and a labor shortage, all of which have done their part to create a multi-billion dollar loss for the industry.

Pinal and legislators such as State Senator Hannah-Beth Jackson (D-Santa Barbara) believe the new overtime measure will ease the labor shortage. Increased wages should increase the motivation for workers to join the labor force in the fields.

"When you pay people a better wage," says Jackson, "more people are willing to do the work."