Abedin, 40, would be the first Moslem Secretary of State, and One of the Youngest Ever 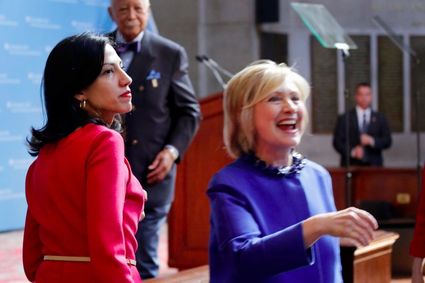 Huma Mahmood Abedin, 40, served as vice chairwoman of Hillary Clinton's 2016 campaign for President. Prior to that, she served as the deputy chief of staff to U.S. Secretary of State Hillary Clinton from 2009 to 2013.

ABedin parlayed a 1996 Whitehouse internship into a role as Mrs. Clinton's Right Hand Man, or Woman.

Former Secretary of State Hillary Clinton is listed as the supervisor certifying Abedin's designation as a "special government employee. This classification allowed Abedin to work for an outside consulting firm and the Clinton Foundation, at the same time that she advised then Secretary of State Clinton. http://www.politico.com/story/2015/09/clinton-abedin-state-job-approved-214038#ixzz4KYuDW8UF

The Clinton campaign reiterated Sunday that Clinton did not personally sign documents for Abedin, or other employees. Hillary Clinton's name was listed in print, but the signature underneath was redacted by the State Department. The document caused a stir and led to media reports Clinton had lied about not having been involved..

Clinton had said on TV weeks ago that she "was not directly involved" in Abedin's SGE status, a position that is currently under investigation by the Senate Judiciary Committee for potential conflicts of interest.

According to documents obtained by the conservative group Judicial Watch through a Freedom of Information Act lawsuit, released Thursday, Clinton was the immediate supervisor named on one of the documents that transition her to this new post, permitting her then-deputy chief of staff to serve simultaneously as an outside consultant.

The campaign on Sunday said signed the form, not Clinton herself. Mills would have the authority to sign such forms for Abedin.

Prior to that she was traveling chief of staff and served as assistant for Clinton during Clinton's campaign for the Democratic nomination in the 2008 presidential election.

She is married to, but separated from, Anthony Weiner, a former U.S. Representative from New York. Weiner has been a major embarrassment to the Clintons. Weiner has a penchant for sending partially clothed photos of himself to women he's met on the internet. But unless you've been on Mars this year, you already know that story.

Despite having grown up in different countries, Abedin and Clinton have a lot more in common then husbands with a history of philandering. It makes sense that Clinton would want to appoint Abedin to her old job leading the State Department. Secretary of State is third in line to the president, under the US Constitution. It also makes sense that Clinton would want her right hand woman to back up herself and Vice President Tim Kaine in that way as well.

Abedin has served as vice chairwoman for Hillary Clinton's 2016 campaign for president since 2015 and continues in her role as personal assistant to Clinton. Her elevation to the No. 3 position in the campaign was a "transformative shift... to campaign power center of her own," according to Politico. She screened and interviewed applicants for key campaign roles, including campaign manager Robby Mook, and was the primary channel for communications to Clinton before the campaign officially began. After Republican presidential candidate Donald Trump proposed banning Muslims from entering the United States, she wrote an Open letter to Clinton supporters calling herself "a proud Muslim" and criticized Trump's plan as "literally (writing) racism into our law books".

In a letter dated June 13, 2012, to the State Department Inspector General, five Republican members of Congress-Michele Bachmann of Minnesota, Trent Franks of Arizona, Louie Gohmert of Texas, Thomas J. Rooney of Florida, and Lynn Westmoreland of Georgia-claimed that Abedin "has three family members – her late father, her mother and her brother – connected to Muslim Brotherhood operatives and/or organizations."

The claims in the letter were generally rejected, and were labeled by some as conspiracy theories. The Washington Post editorial board called the allegations "paranoid," a "baseless attack," and a "smear."

The letter was also criticized by, among others, House Minority Leader Nancy Pelosi and Representative Keith Ellison, Democrat of Minnesota, the first Muslim member of Congress, who called the allegation "reprehensible." Senator John McCain, Republican of Arizona, also rejected the allegations, saying "The letter and the report offer not one instance of an action, a decision or a public position that Huma has taken while at the State Department that would lend credence to the charge that she is promoting anti-American activities within our government....These attacks on Huma have no logic, no basis and no merit."

Bachmann's former campaign manager Ed Rollins said the allegations were "extreme and dishonest" and called for Bachmann to apologize to Abedin.

The Anti-Defamation League condemned the letter, calling upon the Representatives involved to "stop trafficking in anti-Muslim conspiracy theories."

Abedin was born on July 28, 1976. At the age of two, she moved with her family to Jeddah, Saudi Arabia, where she was raised and lived until returning to the United States for college. Abedin traveled frequently during her childhood and teenage years and attended a British girls' school.[8]

Both of her parents were educators. Her father, born in New Delhi, India, on April 2, 1928, was an Islamic and Middle Eastern scholar of Indian descent, who received his Ph.D. from the University of Pennsylvania, and then in 1978 founded the Institute of Muslim Minority Affairs, an organization devoted to the study of Muslim communities in non-Muslim societies around the world. In 1979 he founded the Journal of Muslim Minority Affairs, which his wife took over after his death; his daughter Huma was listed as an associate editor in 1996–2008.

Her mother, born in India (now Pakistan after British Partition), also received her Ph.D. from the University of Pennsylvania, and is currently an associate professor of sociology and dean at Dar Al-Hekma College in Jeddah, Saudi Arabia.

At age 18 Abedin entered George Washington University, where she earned a Bachelor of Arts degree/. As a teenager, she aspired to be a journalist like her role model Christiane Amanpour, and wanted to work in the White House press office.

Firstly, I have held a high level security clearance. I am sure even back when I was vetted a long time ago, if I had Huma's connections I would have not received my clearance. This has nothing to do with her personal values, brains, patriotism, or any other factor but risk. You can't sue the government for discrimination in regards of national security issues if you are turned down. It's incredible to me that Hillary would do such a reckless thing, and I hope the Senate would not confirm it. Oh, and to the author, the PC term today is Muslim, not Moslem... unless you intended aninnuendo. Moslem pronounced as with a Z - Arabic interprets the meaning as evil and unjust.

and Anthony wiener can be her houseboy

Huma's parents have perfect Islamist credentials. Her father is a bigwig in the radical Islamist party Jamat i Islami in Pakistan. Her mother some Islamic legal expert from Saudi Arabia. The family moved from Saudi Arabia and has clear Islamist leanings.

She would be 5th in line using your math. The Secratary of State is preceded by the Speaker of the House and President Protem of the Senate on the list of Presidential succession.

At some time during the first debate Trump should turn to HRC and pointedly ask, Will you promise to the American people that you would never appoint a person with a history of close personal ties with the Muslim Brotherhood?

i don't see any evidence in this story that the headline is true...where is the email or quotations from the email saying that is hillary's intention?

Wow. Already lining up a close crony who has been central to her massive amounts of lies, corruption and cover-ups to be secretary of state. I guess we should expect this if she becomes President. At this point I would trust Nixon over her, and he's dead!

Better reread your pocket guide to the Constitution, Stan. The Secretary of State is *Not* third in the line of succession to the President; that distinction belongs to the President pro Tempore of the Senate, who follows the Speaker of the House.

Huma was Hillary's intern. She stated that she fell in love with Hillary the moment she laid eyes on her. They have been intimates ever since. Apparently the Bachmann allegations are factually correct, but that doesn't mean Huma is any less patriotic than the Clintons themselves.