The Business of Getting High: Exploring the Cannabis World Congress and Business Exposition 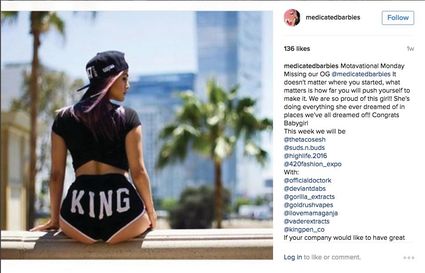 The pretty cannabinoid faces of Medicated Barbies https://www.instagram.com/MedicatedBarbies/ were representing Deviant Dabs, http://thedab.com/, a company that focuses the farmers market buying crowd by crafting "artisanal concentrates made in small batches from top quality organic cannabis grown by multi-generational experts in the craft."

Thousands of suited up budtender businessman gathered Sept. 7-10 at the Los Angeles Convention Center for the Cannabis World Congress and Business Exposition, and there was nary your classic Shaggy stoner in sight. But what there was was a lot of talk of a lot of green, both of bud and money to come from bud. It is estimated that $50 billion a year is generated in cannabis sales within the United States, yet only $5.4 billion of that is legal sales.

But all that's about to change.

Prohibited across the United States less than five years ago, marijuana is now legal and regulated in Alaska, Colorado, Oregon, Washington, and the District of Columbia. This November, voters in Arizona, California, Maine, Massachusetts, and Nevada will also vote on AUMA (Adult Use of Marijuana Act) ballot initiatives that would repeal prohibition of the drug, with investors expecting a large uptick in the market after these states votes in November.

The Cannabis Means Business expo housed the entire west wing of the Convention Center. Five conference halls hosted speakers who spoke for 40 minutes about specific aspects of the industry. Up to 30 speakers lectured each day about topics ranging from growing, to Native American laws and cannabis, to policy reform and banking. One of the major topics was the relationship between prescription meds and cannabis. T.V. and radio personality Montel Williams spoke to room of nearly 70 people on Thursday afternoon about his addiction to opioids and how cannabis saved his life.

Avis Bulbulyan, the Chief Executive Officer and Founder of SIVA Enterprises, http://www.sivallc.com/, was one such featured speaker for Opening Day, lecturing on "The Road to State Licensing." Originally established as Bulbulyan Consulting Group, SIVA Enterprises leverages more than a decade of experience in the cannabis industry to provide consulting services, turnkey management, venture opportunities, and brand acquisitions and licensing. "Jumping into the Marijuana industry is as simple as taking traditional business principles and applying to this industry, you just need to know the ins and outs," noted Bulbulyan.

Just this year, SIVA has helped develop and launch 4 new cannabis companies: ZASP (cannabis-infused drinks), Varavo (edibles and oils), the Herbal Pain Relief Center (a cannabis dispensary), and Verdant (a cannabis distribution company). "Because marijuana is still a Schedule 1 drug you need to brand well and then franchise in others states through the licensing of your product and IP."

Lectures wasn't the only option to partake at the Cannabis World Congress. Numerous vendors displayed their forays into the world of Mary Jane in the convention centers enormous auditorium. People had ample opportunity to mill around checking out new products and technology or just network.

The pretty cannabinoid faces of Medicated Barbies https://www.instagram.com/MedicatedBarbies/ were representing Deviant Dabs, http://thedab.com/, a company that focuses the farmers market buying crowd by crafting "artisanal concentrates made in small batches from top quality organic cannabis grown by multi-generational experts in the craft."

The Expo was also a great opportunity to get educated. The NORML Foundation, whose mission is to move public opinion sufficiently to legalize the responsible use of marijuana by adults, and to serve as an advocate for consumers, had an information booth allowing people to ask questions about policy law, and other cannabis related issues. 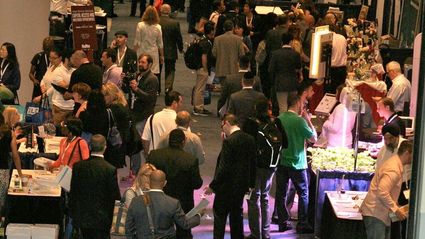 The Cannabis Means Business expo housed the entire west wing of the Convention Center. Five conference halls hosted speakers who spoke for 40 minutes about specific aspects of the industry.

According to a recent Gallup poll, in 2013, only 7% of American adults said they were marijuana users. Today, less than three years later, usage rates have nearly doubled, as 13% of U.S. adults say they smoke cannabis. Yet, despite what appears to be a growing acceptance of the drug, and its exponential growth in business, the DEA recently reiterated marijuana's classification as a Schedule 1 substance, placing it in the same category as Ecstasy, Heroin, and LSD.

With AUMA (Adult Use of Marijuana Act) being voted on in November as part of California Proposition 64, it's time for California residents to make a choice for both recreational legalization and new business ventures.

As another Scott Greiper, president of Viridian Capital Advisors, a New York investment firm that specializes in legal cannabis companies, noted in his lecture, "There was the dot com from 1995 to 2000. From 2005 to 2008 there was social media. And now we have cannabis."

Kat Thomas is CEO and Founder of This Way Adventures, http://www.thiswayadventures.com/ a creative media company. When not writing for the Santa Monica Observer she is currently developing a cannabis cabaret touring company.