Tickets for the daily, nonstop flight are now on sale at alaskaair.com 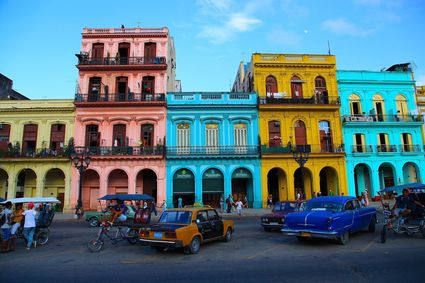 Colorful Havana was a popular travel destination during the first half of the 20th century.

The daily nonstop flight from Los Angeles is among the first regularly scheduled commercial flights to the island country in more than 50 years, and is the only nonstop flight to Cuba from the West Coast.

"This is a historic year for U.S. travelers, who can now fly to Cuba from the U.S. on scheduled commercial service for the first time in more than 50 years," said Andrew Harrison, Alaska's chief commercial officer. "We'd like to thank the U.S. Department of Transportation for providing Alaska Airlines the opportunity to operate the only daily, nonstop flight from the West Coast to Cuba."

The flights were awarded by the DOT in August, and remain subject to approval by the Cuban aviation authorities.

With the addition of flights to Cuba, customers traveling from Los Angeles can reach 22 destinations on Alaska Airlines' more than 275 weekly flights, and 84 nonstop destinations worldwide via Alaska's expansive global partner network.

"We are focused on strengthening our presence in the Los Angeles area, with daily service to 25 destinations from four area airports," said Harrison. "With the addition of nonstop flights to and from two cities in Costa Rica last fall, and now Havana, we'll offer up to 87 peak season weekly departures from Southern California to Latin America."

Customers flying from Seattle and Anchorage, Alaska will also enjoy convenient connections to the new route.

Travel to Cuba requires advance planning. The U.S. government does not currently allow U.S. citizens or travelers flying on U.S. airlines to visit Cuba strictly for tourism. Travelers must fall into one of 12 approved categories, including family visits, educational activities and public performances or exhibitions.

To aid customers interested in visiting Cuba, Alaska is working with Cuba Travel Services, the leading travel company serving the destination with more than 17 years of experience. Customers are encouraged to contact Cuba Travel Services for assistance securing travel visas, hotel lodging, and ground transportation and creating itineraries, among other things.

"We are proud to build a new partnership with Alaska Airlines and excited to contribute in their efforts," said Michael Zuccato, General Manager at Cuba Travel Services.

Tickets for the new routes will go on sale September 27 with fares starting from $229.

(All times based on local time zones)

Alaska Airlines, together with its regional partners, flies 32 million customers a year to more than 110 cities with an average of 970 daily flights throughout the United States, Canada, Costa Rica, Mexico and soon Cuba. With Alaska's global airline partners, customers can earn and redeem miles to more than 800 destinations worldwide. Onboard, customers are invited to make the most of their flight with amenities like power outlets at every seat, streaming entertainment direct to your device, Wi-Fi and an inspired food and beverage selection featured on most flights. Alaska Airlines ranked "Highest in Customer Satisfaction Among Traditional Carriers in North America" in the J.D. Power North American Airline Satisfaction Study for nine consecutive years from 2008 to 2016. Alaska Airlines Mileage Plan also ranked "Highest in Customer Satisfaction with Airline Loyalty Rewards Programs" in the J.D. Power Airline Loyalty/Rewards Program Satisfaction Report for the last three consecutive years. Alaska Airlines is a subsidiary of Alaska Air Group (NYSE: ALK). Learn more on the airline's newsroom, blog, alaskaair.com, @AlaskaAir, facebook.com/alaskaairlines and linkedin.com/company/alaska-airlines.