The vandalism does not appear to have led to a renewed interest in Donald Trump's alleged history of misogyny, sexism, and harassment 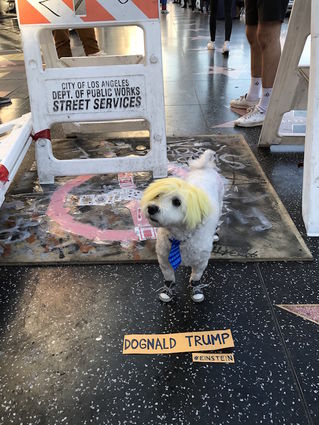 Photo of a dog dressed in a yellow wig, blue-striped tie, and sneakers, standing on top of the graffitied wooden board covering Donald Trump's Star on November 2, 2016. A handwritten sign in front of the dog reads, "DOGNALD TRUMP".

On or about 5:45 a.m. on Wednesday, October 25th, a man dressed as a construction worker used a sledgehammer and a pickax to destroy Donald Trump's Star on the Hollywood Walk of Fame, a California State Landmark. Trump was awarded the 2,327th Star on the Walk of Fame in January 2007 to honor his work as a producer of the television show, The Apprentice, and of the Miss America pageant.

A man identified as James Otis, 52, claimed responsibility for vandalizing Trump's Star, and has since been arrested.

Otis told the media that he has family members who have been victims of sexual assault, that he considered Trump "the poster boy for sexual assault", and that he was "terribly upset" that Trump was a serious Presidential candidate. While vandalizing the Star, Otis allegedly attempted to obliterate Trump's name and then dislodge pieces of the Star so that he could auction them off to raise money for the women who had accused Trump of sexual assault.

Last Wednesday's attack was not the first time that Donald Trump's Star has been defaced. Among other reported incidents, people have deliberately scuffed the Star, painted graffiti and swastikas on it, written nasty comments, taken crude selfies and then posted them online, and in one case, after her dog accidentally defecated on the Star, the dog's owner posted a picture on social media of the dog and the Star with the comment, "My dog hates you". But none of these acts were comparable to the physical destruction of the Star that occurred last Wednesday.

Like Otis, many of those who utilize vandalism for political expression claim that their actions are a form of free speech.

They hope that the vandalism will receive wide media attention, and if they claim responsibility, they will be able to tell the world why they did what they did. But vandalism is a crime, and breaking the law, even for political purposes, often has consequences. Otis was arrested on suspicion of felony vandalism, and if convicted, he could serve up to three years in prison and face over ten thousand dollars in fines under California law.

Otis clearly understood the potential consequences of his actions. "I'm happy to go to trial," he said in an interview. "I will gladly pay the money if I have to and if I must go to jail, I will." Indeed, he appears to have willingly sacrificed himself for his cause.

Otis was correct that the destruction of Trump's Star on the Hollywood Walk of Fame, less than two weeks before the Presidential election, was a newsworthy event, and, in fact, it was covered by media outlets around the world. But the media coverage, and the public's reaction, may not have been what Otis anticipated.

Otis' vandalism also does not appear to have led to a renewed interest by the public in Donald Trump's alleged history of misogyny, sexism, and harassment. It seems the public was briefly entertained by Otis, and has now moved on. 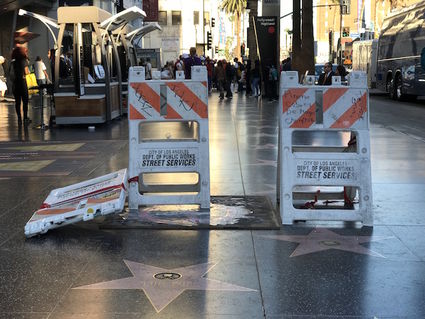 Photo of Donald Trump's Star on the Hollywood Walk of Fame on November 2, 2016. The Star is covered by a graffitied wooden board and vandalized traffic barricades, one of which is knocked over.

As for the Star, it has quickly been rebuilt and, over the past weekend, it served as a mobilization point for Trump's LA-based supporters. At one point, a homeless woman was purportedly assaulted while she sat on the Star to guard it from further harm. Her actions generated almost as much buzz as Otis'. The hashtag #StarProtector was born, and Trump supporters raised over $23,000 on GoFundMe to help the woman.

The Observer visited the Star on Wednesday, November 2, one week to the day after Otis' alleged misconduct. It is forlorn. Gawkers no longer gather there. Trump supporters and protestors no longer surround the Star and confront one another. The homeless woman who pledged to guard the Star is gone. And so are the media.

The rebuilt Star is now covered by a graffitied wooden board and three vandalized traffic barricades, one of which was knocked over and never righted. The majority of pedestrians pass by the Star with barely a glance.

One woman did stop, however. She dressed her dog in a yellow wig, blue-striped tie, and sneakers. She set the dog on top of the graffitied wooden board covering the Star, placed a handwritten sign in front of him that reads "DOGNALD TRUMP", and took a photograph.