Trump traded the VP position for the evangelist vote, and that put us all in danger 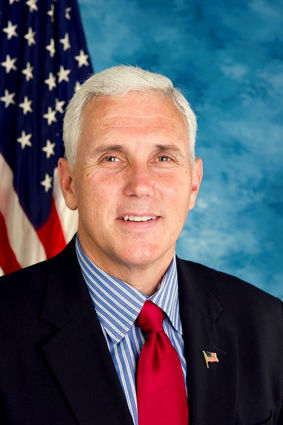 For months now rational Americans have been both bewildered and amused that the pigheaded adolescent rebellion of GOP leaders during the Obama administration led to a presidential nominee who is, to say the least, well out of his depth.

At first, no one really believed that this blowhard businessman might actually ascend to the Whitehouse. People aren't that silly, are they?

Then, sometime mid-summer, a dangerous and sinister alliance took place.

After a series of private meetings and secret deals, Donald Trump sold his soul to the evangelical right.

Suddenly, a man who had never shown anything even remotely resembling Christian virtues was being praised as a "Baby Christian" who was going to lead America into righteousness. Evangelist leaders called upon their faithful to fall out into the streets and campaign to put their new savior in control. This large and active voting block might actually have the chops to elect a man who is totally unqualified to be the leader of the free world. It was a huge boon for Trumpkin, but that kind of political asset doesn't come cheap.

The billionaire had to offer up something big to get those "religious" leaders to lie for him. He had to give them something with real political power, so ....

He gave them the vice presidency.

Remember, Trump famously doesn't want to run the country. When attempting to lure John Kasich into considering the VP position, Donald Trump Jr. assured Kasich that he could have control of both domestic and foreign policy, while the Donald was busy making America great.

Trump was probably quite happy to promise the real reigns of leadership to someone else, so he didn't have to, you know, actually learn stuff (which is ever so much harder than just making stuff up).

Mike Pence was a very clever choice to be the power behind Trump's throne.

To the uninformed observer, Pence seems uninteresting and bland.

Not true. Don't believe it.

Pence is no Uncle Joe.

His record as governor indicates that he is willing to completely undermine the core values of a free country in order to impose his own vision of theocratic control.

While Donald Trump is a bumbling political idiot, Mike Pence is actively against the people and possibilities that we need to help America to have a strong future. His career has been built on hateful exclusion, not intelligent inclusion.

Here are some things that every voter should know about Mike Pence:

- Science and invention helped build America, but Mike Pence is 100% anti-science. He chooses not to accept the preponderance of evidence that supports anthropomorphic climate change, and he thinks schools should be required to teach Christian "creationism" mythology alongside evolution in science classrooms.

- Mike Pence is anti-environment. As governor, he has vetoed every piece of environmental regulation that has crossed his desk. He doesn't want the EPA to regulate greenhouse gases, and he does want to open up pretty much every part of our country to oil and coal companies. No more wildlands under Pence. He is one of those irresponsible extremists who think that God gave us the world so we could just use it up, and when it is all used up the second coming will occur. There is no Biblical basis for this belief.

- He obsessively pursues a personal vendetta to take Title X funding away from Planned Parenthood because Planned Parenthood provides abortion services. Title X money CANNOT be used for abortions. Abortions are paid for by the recipient or through private, tagged donations. Taking away Title X will not impact abortion services, but it would leave thousands of women without access to cancer screenings or birth control.

- Speaking of birth control, Mike Pence once again revealed his historical ignorance in saying that condoms are "modern" and "liberal." He thinks all women should be pregnant unless they can't afford a baby, in which case they should abstain from sex, even if they are married. That's right: sex is only for procreation in PenceWorld. If you can't afford the diapers, then hubby should be sleeping on the couch.

- Mike Pence is also anti-gay, to the point of denial. He doesn't want the government to pay for cancer screenings, but he does want the government to pay for abusive "conversion therapy" programs that systematically undermine the victim's self-esteem, and then indoctrinate them into robotic gender-appropriate behaviors. He has signed into law a bill that allows discrimination against LGTBQ customers based on religious belief.

- Mike Pence is pro-birth, but not pro-life. He once funneled $3.5M dollars from Temporary Assistance to Needy Families into programs that counsel against abortion. He wants those women to have those babies, but he doesn't care if the kids starve or live on the streets afterward.

When you add it all together, you can see that the most dangerous part of the Trump-Pence ticket is not the leering orange face at the top, but that calculating quiet man who will be leading the charge from behind. 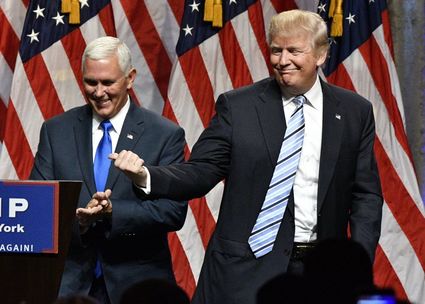 Mike Pence is basically against anyone who is not white, conservative, Christian, and male.

I guess he does have something in common with Donald Trump, after all!

I'm glad they pointed out the difference between pro-life and anti-abortion. I'm pro-life. I believe life begins long before birth, and unborn babies deserve protection. I also believe that those kids are valuable after they're born, even if they have dark skin, poor mothers, no fathers, etc. And I believe that it's far more humane to prevent women from *wanting* abortions, rather than just preventing them from having abortions. I want whether abortion is legal or not to be a moot point, because the only people getting pregnant want to be pregnant and know they can handle raising the child. I'm pro-life, Mike Pence is just anti-abortion.

Apparently the author of this opinion piece thinks killing a million babies a year for any reason and harvesting their parts like a human junkyard is not inhumane but Mike Pence is. This is a different world. Today women are choosing to abort a baby because it's the wrong sex and no one cares, they're saving the 'parts' from what obviously were healthy babies or they wouldn't save them, pulling them out and then cutting their spinal cords...and Mike Pence is the evil man- amazing. Well, now they're both in office and the tolerance crowd is in the street destroying property, burning and looting and bullying anyone that voted for them. Need to get a mirror out and look into it deeply.

He has been such a nightmare for our state. He not only humiliated us every fort night but we have a huge PR system of signa saying. this business serves everyone just to distance ourselves from him and his ilk.

He also does not believe women should be in the military. As governor of Indiana, the vote was split and the people elected Glenda Ritz as superintendent of education. Pence basically just eliminated her position, and totally reformed the education system in Indiana, stripping Ritz of all power. Eliminated the position that 1000000 people had elected Ritz to fill. Indiana was glad to be rid of Pence. The only reason mike pence idiotic beliefs have not been front page headlines, is because he is hiding behind a narcissistic carnival barker who is always making outrageous comments