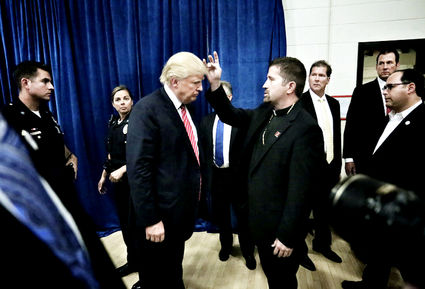 In what is no doubt an opening salvo in a trade war with the People's Republic of China, Donald Trump has threatened to add 45% tariffs to iPhones not built in the United States. This echoes what the Republican President Elect said during the recently concluded, 2016 US Presidential campaign.

China's response? President Xi Jinping of China stated to Trump that he placed "great importance on the China-U.S. relationship, and look[s] forward to working with you to uphold the principles of non-conflict, non-confrontation, mutual respect, and win-win cooperation." So perhaps the threat is working.

"This plan is so ill-thought-out that there are plenty of other places that smartphones can be manufactured," says Tim Coulling, a senior analyst at Canalys. "In fact, China now, in terms of manufacturing electronics, is on the expensive side, so production could easily go another country that just isn't China." He noted that Apple could easily move its production to a third country, such as Vietnam, and assemble the handsets there.

Foxconn, based in the gritty, industrial Tucheng district in suburban Taipei, and its smaller Taiwanese rival churn out more than 200 million iPhones annually from their massive Chinese campuses.

A Bloomberg reporterd seated at Club 21 in New York overheard Trump, his daughter Ivanka and son Jared Kushner discussing the program. "He sat down between his wife Melania and daughter Tiffany. One of my dinner companions identified us as journalists from Bloomberg News. Now, we had been there for a couple hours at that point and were disconnected from the news. We overheard him discussing Apple's intention to assemble at least some iPhones in Cupertino, or Arkansas," he said.

"Apple asked both Foxconn and Pegatron, the two iPhone assemblers, in June to look into making iPhones in the U.S.," a source said. "Foxconn complied, while Pegatron declined to formulate such a plan due to cost concerns."

Another source said that while Foxconn had been working on the request from Apple Inc., its biggest customer that accounts for more than 50% of its sales, Chairman Terry Gou had been less enthusiastic due to an inevitable rise in production costs.

"Making iPhones in the U.S. means the cost will more than double," the source said.

The person added that one view among the Apple supply chain in Taiwan is that U.S. President-elect Donald Trump may push the Cupertino, California-based tech titan to make a certain number of iPhone components at home.

According to research company IHS Markit, it costs about $225 for Apple to make an iPhone 7 with a 32GB memory, while the unsubsidized price for such a handset is $649.