"A Nice Family Christmas" at the Lonny Chapman Theatre in Burbank

Now into its 43rd season this is yet another great work from the Group Rep and is very much worthy of your time. 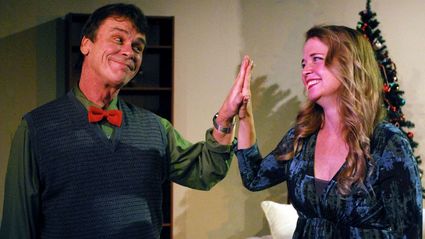 If laughter truly is the best medicine, and it is, then one of the very best pharmacists is without a doubt playwright Phil Olson and one of the best medical directors has to be Doug Engalla who together with their staff of medical/acting professionals has just premiered the powerful laughter medicine they are calling "A Nice Family Christmas." I mean from the first opening lines to the surprising joyous conclusion the entire audience was in almost constant laughter. Heck the old guy sitting next to me, and the even older guy sitting within me and my nine year granddaughter were all almost continuously laughing loud and steady.

On stage was a brilliant depiction of a not all that bizarre family Christmas gathering. Well okay actually it is a bit "out there" but various elements I am sure have touched just about everyone which is precisely what makes it so darn funny because everyone can relate to the story on stage one way of another.

Great acting from the medical/acting staff also helps bring it home. Without question the head of laugh surgery was Marcia Rodd as the constantly wisecracking grandma.

Act one comes to a very over dramatic and therefore hilarious conclusion as Michael, portrayed by Patrick Burke discovers that the very imperfect Uncle Bob played by Fox Carney just might be his natural father. 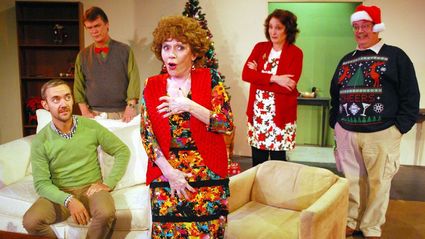 But as the show moves into Act Two many issues get resolved and there is something truly extraordinary about to happen involving the very unexpected generosity of the sassy Grandma. By the end of the show you are filled with joy and delight from abundant laughter and a very good spirit from the way that particular Christmas day with that very special family all comes together in the very best spirit of the season.

Now into its 43rd season this is yet another great work from the Group Rep and is very much worthy of your time. Perhaps leave the very shy, sensitive or young folks (under 10) at home but overall it is something most people can deeply enjoy. It is playing now through December 18th at the Lonny Chapman Theatre, 10900 Burbank Boulevard, North Hollywood, California 91601.

Reservations and ticketing are available online at http://www.thegrouprep.com and by telephone at: 818-763-5990.