Horsing Around In Long Beach At The Longines Masters Series

Longines stops in LA, Paris, and Hong Kong as the number one show jumping event in the U.S. 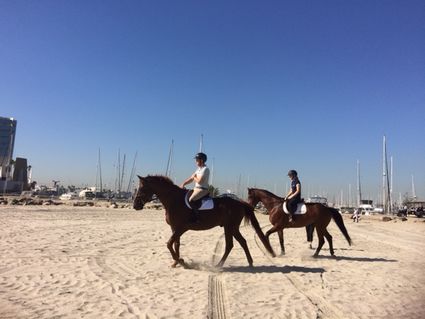 The Longines Masters Series tour that makes stops in Los Angeles, Paris, and Hong Kong is the number one show jumping event in the U.S. and one of the most prestigious equestrian events in the world

The Longines Masters Series tour that makes stops in Los Angeles, Paris, and Hong Kong is the number one show jumping event in the U.S. and one of the most prestigious equestrian events in the world. This year the Long Beach Convention Center nabbed the second season of the LA stop from the Staples Center in LA. Hosting the four day event came with enormous logisitical challenges: managing 300 horses, 50 of whom had to be transported across the Atlantic and quarantined, 153 riders from 25 countries, and 50,000 visitors. The city of Long Beach considers the successful hosting of the event a feather in its cap.

The competition's prize money is considerable: the Grand Slam is a bonus of 1 million Euros for three wins in a single city, while the Super Grand Slam bonus is 2.25 million Euros for winning at all three stops in the same season. That kind of money puts the competition in the same prestigious ranks as the Grand Slam in tennis, the Ryder Cup in golf, and America's Cup in sailing. It is also a magnet for top atheletes. This year's competition boasted seven Olympians including Kent Farrington and Lucy Davis of Team USA that won silver in show jumping at the Rio Games.

The competition featured three levels of 6 Masters competitions, with other competitions for elite professional, amateur and junior riders. A top draw was the Longines Speed Challenge which focused on speed, agility, power and precision of both horse and rider, with less penalties for faults less than in other competitions. The glitz and glamor of this Challenge come from the fact that it is not only the world's fastest class, but also because of the size of its prize - the Emirates Gold Cup worth $100,000.

The high speed La Martina indoor Polo Exhibition was a fast paced thrilling spectacle that combined the horse's strength and maneuverability with the skill and accuracy of the players.

Masters activities included dressage by Jan Ebeling, a native Angeleno with 30 years' experience, incuding three Olympics with Team USA. His freestyle program showed off the beauty and elegance of beauty and elegance of a horse's technical movements like the piaffe passage, pirouette and half pass set to music.

Sercam shows, created and performed by Spanish horse 'whisperer' Santi Serra showed off 'natural dressage' that captures the beauty and grace of wild horses and the harmonious interraction between man and horse as the horse willingly submits to the rider without force.

The popular Pro-Am for Charity competition emphasizes showmanship as much as show jumping. It pairs professional riders with amateurs - often celebrities who trade classic riding gear for costumes and choreography. The competition has seen TV star Kaley Cuoco and teammate Tracy Wade dressed as Luke Skywalker and Darth Vader taking the Pro-Am for Charity prize; characters from the Wizard of Oz have raised money for Thrive Animal Rescue, and Alice in Wonderland and Queen of Hearts have done the same for Just World International which helps unerpriveledged children.

Outside the arena, guests could hang out in the Paddock Lounge and enjoy a glass of champagne or cocktail, listen to live bands and DJ's, and watch horses and riders prepare for the competition.

The mix of high end show horses with high end living in the multi-faceted Longines tour resulted in a unique experience that could be shared by the whole family. http://www.longinesmasters.com/en

Between competitions Long Beach offers many attractions. The Queen Mary, Long Beach's most famous tourist attraction, is listed on the National Register of Historic Places includes a hotel, a museum, and restaurants, including Sir Winston's which features a gourmet menu and an extensive wine list. http://www.queenmary.com

The Museum of Latin American Art http://www.molaa.org is the only museum in the United States dedicated to modern and contemporary Latin American art. Notable is its 15,000 sq. ft. sculpture garden that provides a relaxing break during a visit.

The Aquarium of the Pacific displays over 11,000 creatures in over 50 exhibits that represent the diversity of the Pacific. http://www.aquariumofthepacific.org 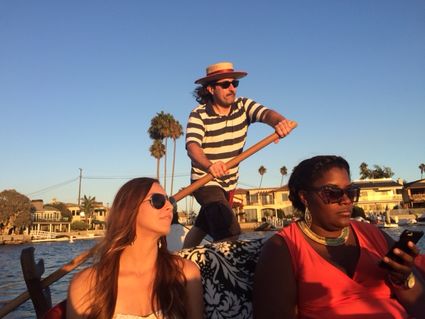 The Longines Masters Series tour that makes stops in Los Angeles, Paris, and Hong Kong is the number one show jumping event in the U.S. and one of the most prestigious equestrian events in the world

The Gondola Getaway cruise on Alamitos Bay http://www.gondolagetawayinc.com features authentic Venetian gondolas that gently cruise the canals and waterways of Naples Island; the gondoliers even sing in Italian.

For overnighting, the waterfront Hotel Maya is walking distance of Queen Mary. Along with breakast, lunch, and dinner it features and a wide selection of cocktails. Its Fuego restaurant offers great ocean views, and its outdoor patio is a great informal place to hang out. Trails and pathways connect other relaxing spaces within the property, as well as points beyond. http://www.facebook.com/hotelmaya

Outside the hotel, a good place for breakfast is the family-owned Breakfast Bar. For lunch or dinner try Lola's Mexican cuisine where everything is made from scratch with naturally grown ingredients.