Feed lettuce to a giraffe, watch Penguins, then walk on the beach, all in an afternoon. 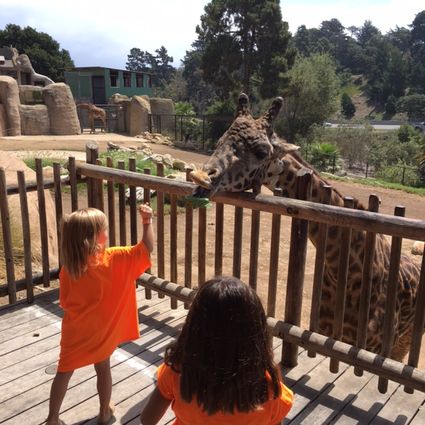 Child feeds a giraffe at the Santa Barbara zoo.

In the scintillating Pacific Coast's cradle, where palm trees soar and cactus flowers bloom, the Santa Barbara Zoo rises boldly to smile at the oil tankers encroaching from the horizon. In this 30-acre, 146-species sanctuary, people of all ages can learn about the last remaining gems of magic on our planet – the animals of each of Earth's corners – and can be inspired and empowered to protect them from human-controllable threats, such as the burning of fossil fuels. As a bonus, the Santa Barbara Zoo is also the only place in North America where you can bathe in the kiss of a Masai giraffe, hear the melodies of Spanish bilingualism, and observe the archetypal California surfer dude in his natural environment, all in one day.

The first item on my family's zoo agenda was the giraffe experience: Guests form a queue leading up to a platform that lets everyone in turn walk close enough to blink right back at those big, black-lashed eyes and feel the sweep of that supple 18-inch tongue as it slurps lettuce leaves (provided by zoo staff) right out of visitors' hands. The animals know when to expect a banquet, and they also know who gets first dibs – while the alpha male Michael accepts tribute from the first throng of zoo-goers, the subordinate adults and adolescent Buttercup waver in the background or come lick the poles at the corners of the feeding balcony, perhaps to manage their intense cravings. Beyond being an awesome photo op, the giraffe experience allows guests to learn firsthand about the Santa Barbara Zoo's giraffes as individuals, and to witness the effects Zoo life has on their socialization, energy level, and perhaps on their species as a whole.

While we waited in line for our lettuce, a docent explained to us that the Santa Barbara Zoo participates in Species Survival Plan programs, maintaining captive populations of vulnerable wildlife and preparing, in some cases, to return strong candidates to the wild. However, many individuals simply can't survive in the current iterations of their once-home environments, which have been drastically transformed by development, industry, agriculture, and climate change.

In my view, the problem of animals in captivity has always been complicated, and the docent's speech made no attempt to mask that complexity, but it also provided some positive evidence that zoos are a vital part of the massive conservation efforts that need to take place and expand if wildlife is ever to be restored to any semblance of its natural freedom and abundance amidst human populations.

The participatory-conservation theme resonates throughout the Zoo, with informative tips on easy ways to contribute to each exhibited creature's survival. This hard-facts content is layered in bite-size pieces across Zoo grounds, which provide moment-to-moment enthrallment even regardless of predictions etched into the far future. Asian small-clawed otters paint their rocky habitat in puddles of water; California condors jostle their companions off tree branches in half-playful power battles; golden lion tamarins swing through their ropes-course as tiny orange babies cling to their backs.

The zoo's ingenious landscaping and its rich botanical gardens also attract a number of non-human visitors – while we ate lunch at an outdoor table we admired the ducks, crows and seagulls playing out their daily social interactions on the lily pond right beside us. At one point, perhaps upon the suggestion of a couple of bickering crows, the kookaburras housed nearby started up a riveting cheer-howl, which drew us seamlessly back into exploring mode.

After partaking in the train ride, lauded as one of the quaintest of its kind at a contemporary zoo, we hurried to catch the penguin feeding and keeper talk, a twice-daily affair. Two professional penguin keepers spoke from inside the Humboldt penguin enclosure, while delivering fish into ravenous knee-high beaks swarming around them and apparently keeping track on a clipboard (somehow?) of who'd eaten what.

Peering down from a wall overlooking the penguin enclosure was an exotic-looking tall bird with blue dorsal feathers and two whisker-like ornaments on each cheekbone. I asked the keepers whether it was an escaped zoo animal. The main spokesperson explained simply that it was a native bird, a black-crowned night-heron, who was free to fly about wherever it pleased.

However, it didn't seem to please the zookeepers too much that the black-crowned night-heron, another of its brethren, and a seagull were loitering at the edges of the exhibit. Later, spectators were privileged to see why: Elegant as a gourmet blade, the first black-crowned night-heron swooped down and snatched a fish right from the outstretched hand of a zookeeper as she tried to feed it to a penguin.

While we laypeople laughed over the unexpected excitement, the two keepers peered into their near-empty fish bucket with grim-lipped certainty. It seems Zoo efforts end up nourishing several species outside the official collection. The robbery also brought to light a daily trial faced by conservation workers caring for animals: what are we conserving? A behavior (hunting, scavenging, fearing humans), an individual's freedom, or a branch of the taxonomic tree? Similarly to the giraffe experience, the penguin talk didn't attempt to answer these big questions, but it did open them up for visitors to contemplate.

In my view, one of the oft-overlooked yet tantalizing assets of the Santa Barbara Zoo is its location blocks from the coastline. Being an amateur marine naturalist, I insisted on a short beach excursion after we'd seen most of the (admittedly smaller than L.A.) Zoo. Along the tide line, we stumbled upon what looked like small coral-shaped cutouts fabricated from beige VELCRO. When I picked up the pieces and traveled their mathematically perfect ridges with my fingernails, and felt their strange combination of strength and fragility, and watched tiny kelp strands twist around their branches, I recognized what they were: the remains of sea sponges. 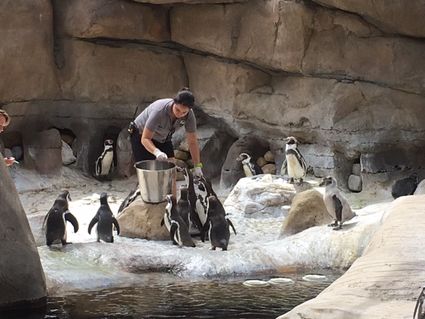 Just before it was time to head back, I accosted a couple walking barefoot along the sand. "Have you seen any of these?" I asked. "I think it's the skeleton of a sea sponge." While only the one man had understood my excited English, he translated it into Spanish for his companion, who smiled at me with an understanding that can bypass words. They graciously accepted my salty gift, which they admired for at least a second until I was out of earshot.

True, a slew of oil tankers glared at me from the horizon as I hurried to catch up with my own herd. But at least I had been able to make a small difference, sparking a moment of interest in two individuals for a single animal, but a moment that could change the course of a future conversation, or amplify through the butterfly effect. It may seem overambitious to imagine the sea sponge will become the next viral Internet phenomenon, but exchange of information is what evolved these invertebrate animals' genes, and exchange of information is how people like myself or any other Zoo visitor are inspired to learn and teach. The Santa Barbara Zoo does an excellent job of lighting that spark in those who open their minds and senses to its bountiful grounds.