UFO Appeared Above SpaceX Rocket in 2016, Just Before Explosion 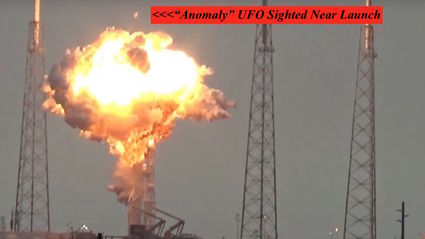 An anomaly appeared above the launchpad when a SpaceX Falcon 9 rocket exploded on September 1, 2016

UFO's have followed Falcon 9 rockets from Florida to California, and so the company plans to launch it's next rocket from an unmanned barge in the Pacific Ocean.

A SpaceX rocket exploded on a Florida launch pad on September 1, 2016. Moving the launch to California did not help, since the same mysterious drone reappeared, and was recorded again by launch pad security cameras.

The company has delayed the launch until January 14th, to investigate the latest UFO intervention. Following the flight, SpaceX will try to land the majority of its rocket on one of its drone ships in the Pacific Ocean.

The Washington Post corroborated what conspiracy theorists have said since the explosion: The Falcon 9 rocket was deliberately sabotaged.

The investigation centers on one particular competitor, United Launch Associates. ULA is a joint venture between Lockheed Martin and Boeing, and there is no love lost between ULA and SpaceX. ULA occupies a building at the Kennedy Space Center launch facility in Cape Canaveral, Florida. The theory is that a rogue ULA employee launched a drone from that building about a mile from the launch site, while the rocket was being fueled. The drone fired a laser weapon into the fuel stream and the explosion followed quickly.

Space aliens could also have done it, admittedly. But this is based on wild speculation. It is well known that aliens support SpaceX and Elon Musk.

ULA and SpaceX are competing for many hundreds of millions of dollars of contracts with the Federal government, so the motive for sabotage is clear. Elon Musk, SpaceX's founder and chief executive says they have eliminated all the obvious possibilities for the explosion, and are now looking at the less obvious possibilities. Presumably, these include UFO intervention, and sabotage.

On September 1, 2016, during a routine preflight readiness test at Cape Canaveral's LC-40, an explosion occurred in the second stage during fueling, completely destroying the launch vehicle and causing extensive pad damage. The payload, Spacecom's AMOS-6 communications satellite was destroyed on impact with the ground. The incident was the first on-pad explosion at Cape Canaveral involving an orbital launch vehicle since the Atlas-Able 9C disaster in 1959.

An official SpaceX press release says that the launch was delayed due to rain and heavy winds that are expected near the Vandenburg, CA launchpad. Prior to the delay, SpaceX had been aiming to launch on January 9th, after receiving a launch license from the Federal Aviation Administration. On Friday, the FAA announced it had accepted SpaceX's investigation had resolved the Florida explosion.

SpaceX has been grounded since the accident, which occurred on the morning of September 1st. The Falcon 9 was being fueled in preparation for a pre-flight test, when it exploded in a fireball, destroying both the rocket and the Amos 6 satellite it was supposed to carry into space. The company has spent the past four months trying to figure out what caused the incident, coming to the conclusion that the failure began with helium pressure vessels located in the rocket's upper oxygen tank. Liquid oxygen propellent is thought to have ignited after getting trapped in materials surrounding the helium vessels. 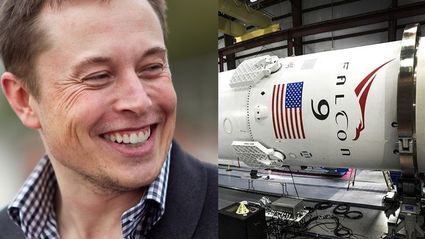 "The FAA accepted the investigation report on the Amos 6 mishap and has closed the investigation," the FAA said in an email statement on Friday. "SpaceX applied for a license to launch the Iridium NEXT satellites from Vandenberg Air Force Base. The FAA has granted a license for that purpose."

Now, SpaceX is looking to return to flight by launching 10 satellites for communications company Iridium, as part of the Iridium NEXT mission. The launch is slated to take place from Vandenberg Air Force Base in California on January 14th, at 12:54PM ET.