Friday will be Coach K's 92nd Birthday, and former students are invited to visit him anytime 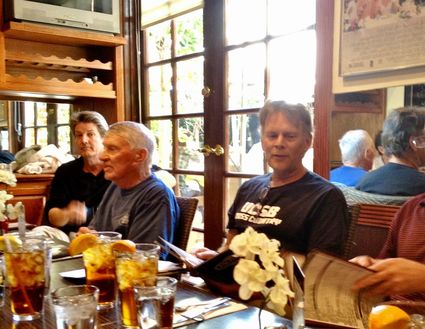 Update: Coach Kampmann's Memorial is set for Feb. 4, 2017 at 11 am at University High School's Stivelman Theater.

Kampmann was the coach from 1962 to 1987 at UniHi. "They just dedicated the athletic field to him-Richard M. Kampmann Stadium. Subsequently, he became the Women's Track and Cross Country coach at Pepperdine University in Malibu.

"Coach K Really can't talk much anymore, the dementia is what's getting him," says his son, Bill Stimming. "A month ago he was coming to our home every Sunday, for dinner with our family. It's sad and astonishing to see the difference in just one month."

"About a month ago, his internist told me he had a year to live, but now, I don't know. It's the dementia that's getting him. There isn't an answer to how long he has. Internally he's in great shape, but neurologically he's shutting down."

"My son Christopher, his grandson, is the love of his life, but he was crying his eyes out knowing the end was near for his beloved grandfather. It broke my heart to see him."

"We're trying to be optimistic. We have hospice that comes in now. They check on him many times a week, he's in very good hands. Friday is his 92nd birthday. Come visit him whenever it's convenient for you," Stimming says, addressing Coach K's many friends and former students.

"I'm sure Dad would love to see you. If he's asleep try to wake him up." If you visit him, say "Hello Coach," and shake his hand. He would love to hear your voice and remind him to put the hearing aids in.

A full house of more than 220 alumni, co-coaches and friends came out to salute a very surprised Coach Richard Kampmann (yes, he was surprised!) for his 90th birthday on February 7, 2015 at Pepperdine University. Coach K resides in Santa Monica, as he has for 50 years. He retired from teaching at Uni in the 1980's, and from Pepperdine in 2007.

Uni alumni dating back to Kampmann's first team in 1960 (!) were on hand to speak, with Western League 880 yards champion Harvey Stein getting the biggest roar:

"When I spoke to [Coach K's son] Bill [Stimming] a few weeks ago, he said 'This is a roast; I'd like you to roast Coach K.' I'm thinking, 'Roast Coach K? I mean, that's like, roasting Moses! What do you say?"

Kampmann himself took the microphone for a new minutes in the middle of the program to reflect on reaching 90, the event and reflections on the journey:

"You know, it's usually when the kids got tired running or they wanted to rest, they'd say 'Coach, tell us a story,' and that would take another 30-40 minutes and after a period of time,

I finally caught on that 'You don't want to hear my story, you just want to sit here and rest.'

"I have been probably, as I guess Lou Gehrig said, the luckiest man on this earth, to have done what I was able to do and to be with the people that came out to me, and you can see that they still carried on and still have thoughts, and I think the memories that they have – that's the reward for me, more than anything else, is that I gave these young people an opportunity to experience a little, miniature part of life and that they had to rely on each other in order to reach an objective.

"I have been very blessed in the fact that I taught at schools that gave me the opportunity to do what I feel I do best, and that is to coach and teach young people how to achieve.

"I can't believe that all you people [can] still stand around, and you must be long-distance runners in order to hang in there that long.

"I normally speak for hours, but I am not going to do it because it's late and I understand that some of you got other appointments, but I want to thank you very, very, very much for allowing me to coach you as a student, and the parents who turned their young people over to me for a period of time. And as you heard the talk, the kids – they're not kids now – they're all very strong professionals – they got out what athletics is supposed to be for, and that makes me feel good.

"Those are the memories I have and I will carry them with me forever."

He's been my idol [who] I followed myself [as Uni coach]. And to tell you the kind of person he was, when I was at Dorsey High School, we had a contest against Uni, and they had had a 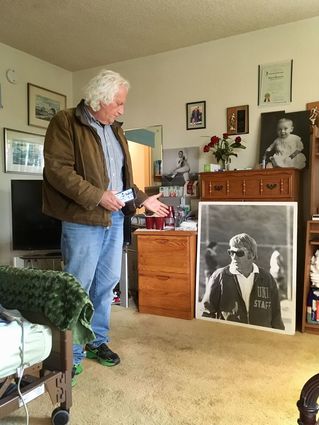 Chuck Levin Unihi '65, gestures to a photo of Coach Kampmann taken after his city championship in 1976.

winning streak of, I think it was like 33 or 37 in a row in dual meets, and I took this group of young people, and they had never really won anything, and went over to University High

School and we beat 'em, snapping their thing. And the thing that impressed me most was that after the meet was over, I was talking to Jim Pursell and he said, 'Coach, could I get on the bus and talk to your kids for a few minutes?' And I thought, 'Wow, of course you can.'

"And he proceeded to tell my Dorsey kids what a fantastic job they had done in snapping a seven-year streak of whatever [number] it was. And that to me is, I said [to myself], 'That's the kind of coach I want to be. I want to do that.' And that's what I thought.

"Anyway, I thank you and appreciate everything that you have said. And we still may try for 100, but I'm not sure."

Everyone who was in attendance is hoping he does.