Ramp is reopened as of Monday Morning. 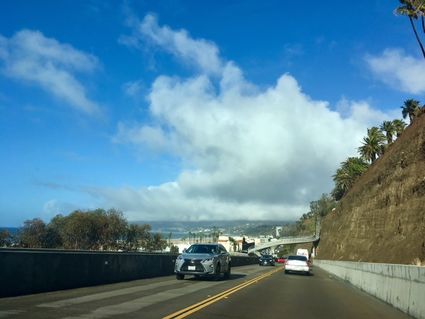 California Incline has been shutdown until further notice due to mud and debris from the bluffs falling on the Incline.

Update 9:19 am PST Monday: "Clean up operations are complete. The California Incline has reopened," says the City Traffic Dept. by e mail.

Update, 4:34 pm PST Sunday: An e mail from the City of Santa Monica says: California Incline Closure due to weather conditions. Mud and Debris on roadway

California Incline was shutdown "until further notice" due to mud and debris from the bluffs falling on the Incline. This in a notice from the City of Santa Monica's traffic Dept. Why the City of Santa Monica needs its own traffic dept., is unclear, since the incline is a connection to a US Highway. The road reopened at 5 PM Friday, after crews cleared mud and debris. It was closed however, due to a third storm at 4:30 pm on Sunday.

The California Incline was originally a walkway known as Sunset Trail, which was cut through the bluffs to provide beach access to pedestrians in 1896. 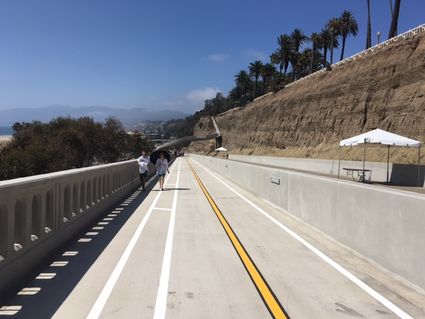 The California Incline was identified as structurally deficient in the early 1990s. In 2007, the City of Santa Monica secured federal highway funds to replace the structure with one meeting current seismic standards.

The new bridge consists of a pile-supported reinforced concrete slab structure with a width of 51 feet 8 inches, an increase of 5 feet 8 inches over the previous structure. [6][7] The project cost $17 million, with 88.5% coming from federal funds and the balance from local funds. Construction began in April 2015 and took 17 months to complete. The roadway reopened to the public on September 1, 2016. The rebuilt structure includes wider sidewalks and bicycle lanes.

The California Incline has been featured in various films, including It's a Mad, Mad, Mad, Mad World (1963) and Knocked Up (2007). It was also portrayed in popular video game Grand Theft Auto V.