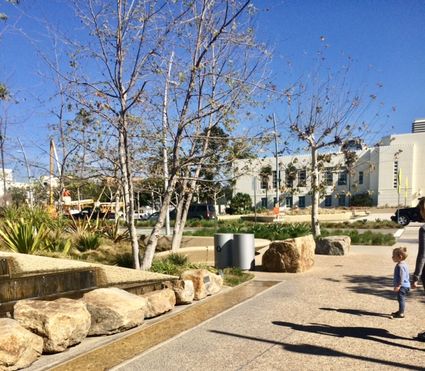 A child looks at City Hall from Tongva Park

• Proposed building "massing" overhangs the historic City Hall building on the south side as it will project all the way to the sidewalk and disturbs the historically significant streetscape view of City Hall from Main Street. The historic landmark significance of City Hall is being chipped away at bit by bit. A recent example was the removal of the City Hall entrance steps during the construction of Ken Genser Square.

• Proposed plans to win the Living Building Challenge (LBC) extreme sustainability level of "Living Building" require that the new City Services Building maintain it's own water well. The location is close to the Pacific Ocean and over time the well will produce water infused with salt. This would necessitate the inclusion of a very expensive and energy demanding desalination plant inside the building. This added infrastructure will require a large amount of expensive future maintenance.

• Proposed plans to win the Living Building Challenge (LBC) extreme sustainability level of "Living Building" require that the new City Services Building maintain its own composting toilet system. This directly conflicts with City Code 5.20.060 [ No private sewage disposal systems shall be permitted within the City. All such systems must be removed and the lots thereto attached connected to the public sewer system. The connection to the public sewer system in accordance with Chapter 7.04 and this Chapter of this Code, must be completed by July 1, 1987. The removal of the private sewage disposal system must be completed by October 1, 1987. (Added by Ord. No. 1825CCS § 1, adopted 11/7/95; amended by Ord. No. 2461CCS § 1, adopted 7/8/14).

Also, there exist possible health risks to City staff, maintenance contractors and the general public due to the potential for the spread of dangerous pathogens related to the project's composting toilets and the LBC required plans to spread the compost material around City Hall planting areas, we request that before any final approval is granted to this project that the City Council first direct staff to consult a professional industrial hygienist and for the consultant to prepare a report on the proposed City Services Building sewage system and compost distribution to be presented at a public meeting. In our cursory investigation and research we have found that a composting toilet system of this extensive capacity is unproven and does not currently exist anywhere in the United States. We have found various professional reports stating that the composting process does not reach temperature levels sufficient to kill off human pathogens and that because of this the proposed project stands to put City staff at risk.

• There is concern that by compacting the proposed City Services Building into such a small footprint, behind City Hall, there are no opportunities for growth, which will likely occur in the near future. It is important to hear a full discussion and disclosure of other possible locations for this new building such as on top of the Santa Monica Sustainable Water Infrastructure Project (SWIP) location to the south side of the County Courthouse.

• Proposed plans to win the Living Building Challenge (LBC) extreme sustainability level of "Living Building" require that the new City Services Building be exorbitantly expensive. There is concern that in attempting to qualify for this level of sustainability the City Services Building project has become "financially" unsustainable. We would like to see a complete cost[benefit analysis regarding the issue of "green sustainability" versus ultimate "financial sustainability" including a discussion of the long[term maintenance of the building's unproven subsystems and what taxpayers should be expected to pay for City staff office space. This analysis should include costs of recently constructed "typical" city office space in other southern California municipalities.

Presently, the new City Services Building is budgeted at $86 million for 50,000 square feet of office space. Plans include financing the project with lease revenue bonds. With the City's "AAA" credit / bond rating, the current interest rate is at 3.25% for twenty years. This will add an additional $55 million of interest to the projected cost for a total amount of $141 million dollars.

Presently, the City leases office space for these 239 workers at various locations around the City at a yearly lease rate of $2 to $3 million dollars per year. Using the $3 million figure, it will take 47 years to break even on the proposed City Services Building considering the project's budget combined with the debt obligation.

Also, as a point of reference, let us compare the presently proposed City Services Building project to the recently opened LEED Gold [ African American History & Culture Museum on the National Mall in Washington DC. This new Smithsonian building is built at a very high quality and cost $270 million for 350,000 square feet. This works out to about $771 per square foot. The Santa Monica City Services Building, at its current $86 million budget and 50,000 square feet will cost more than twice as much at $1720 per square foot. 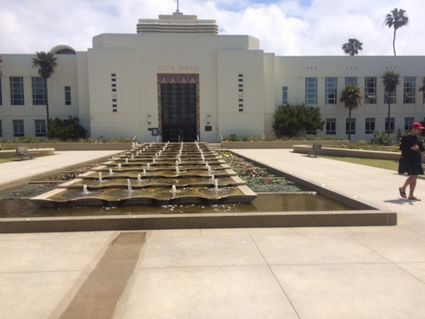 Historic Santa Monica City Hall was built at a cost of, oh, one single occupant bathroom in the City Hall Annex.

• Additional questions beyond cost. Who will regulate the building's day[to[day operations? What about public health redundancy? Do the building plans include multiple barrier quality control protection? Safe drinking water is essential to our physical health and to the economic health of our communities. However, drinking

water is vulnerable to contamination from many potential threats. The 1996 Safe Drinking Water Act Amendments created a coordinated set of programs and requirements to help water systems make sure they have a safe supply of drinking water. These programs and requirements form a Multiple Barrier Approach complete with technical and managerial barriers that help prevent contamination at the source, enhance treatment, and ensure a safe supply of drinking water for consumers.