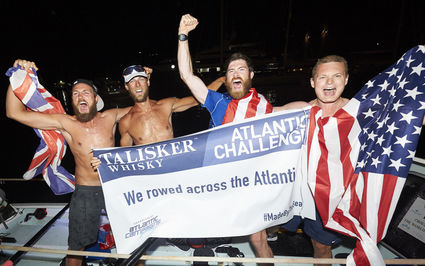 American and British rowers have combined efforts to break the world record for the fastest four-man crossing of the Atlantic Ocean in the Talisker Whisky Atlantic Challenge, known as the world's toughest row.

Americans, Jason Caldwell (34) and Matt Brown (34) and Brits Angus Collins (27) and Alex Simpson (27), Latitude 35, completed the epic 3,000 mile crossing in 35 days 14 hours and 3 minutes, smashing the record by nearly 2 days. They arrived in English Harbour, Antigua, during the late hours of Wednesday evening, greeted by family and friends.

Skipper, Jason Caldwell comments: "This row was extremely tough, all the elements seemed against us the entire way, and we couldn't catch a break. The record nearly slipped away from us in the final week but we've given it everything to make sure we got it. We're over the moon to get the record and be here in Antigua."

This is the second time that Jason Caldwell and Angus Collins have competed in the Talisker Whisky Atlantic Challenge, the world's toughest row. The rowers were rivals in last year's competition, Angus won the race with team Ocean Reunion and Jason finished in eleventh place. Last year, after 12 days at sea, Jason's four-man crew (also named Latitude 35) was reduced to two after two team members were taken off the boat due to chronic sea-sickness. Jason made the brave decision to keep going and he and one other rower managed to row their four-man boat, named American Spirit, to Antigua. This year, Jason and Angus combined forces to break records and settle their unfinished business with the ocean.

Latitude 35 burnt around 8,000 calories a day and lost approximately 20% of their body weight over the duration of the race, which started on 14th December 2016, from La Gomera in the Canary Islands.

They endured tropical storms, sleep deprivation, sweltering heat and the psychological stresses of living and working in such an unpredictable environment. 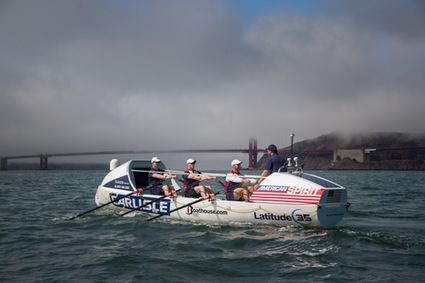 Blaire Fraser, Global Talisker Brand Manager, comments: "We are delighted for Latitude 35 and their epic, record-breaking win, especially for Angus to smash this record and for Jason to win the race which meant so much to him after last year's events. To us, the Talisker Whisky Atlantic Challenge is a perfect opportunity to support a remarkable adventure that at the same time benefits so many worthy charities. While longer than the row our founders, the MacAskill brothers, undertook from Eigg to Skye to found Talisker Distillery in Scotland almost 200 years ago, we know that the same sense of adventure is inherent in each of these outstanding athletes and are excited to see how the experience shapes their journeys in the future.

To track the progress of the remaining teams in the race, please visit: https://www.taliskerwhiskyatlanticchallenge.com/race-tracker/