Moore changed the way women were portrayed on TV 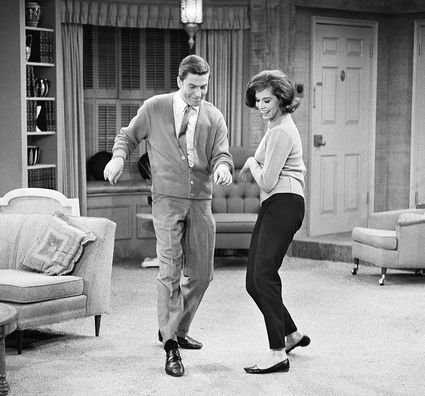 One of the most beloved actresses of the 20th c. died on Wednesday at age 80, reports her longtime representative Mara Buxbaum.

Moore is best remembered for her ground-breaking TV series The Mary Tyler Moore Show. Airing from 1970-77, the show was the first to show an independent, intelligent, woman in her 30s pursuing a career instead of just a husband. As Mary Richards, Moore was the face of sanity surrounded by a group of off-beat neighbors and newsroom work colleagues. Some episodes are hilariously timeless, such as "Chuckles Bites the Dust," where Mary can't keep a straight face at a clown's funeral (a rogue elephant tried to "shell" Chuckles in his Peter Peanut costume), and "Not a Christmas Story," where saccharinely sweet TV cook show hostess Sue Ann Nivens (Betty White) insists that a bickering and inebriated news team join her for an off-season Christmas feast after her holiday show is pre-recorded.

The show's opening sequence, in which Moore throws her hat up into the air on a Minneapolis street, has been memorialized by a statue in that city.

Even before The Mary Tyler Moore Show, Moore was breaking ground for women.

Originally a dancer, Moore's big TV break came when she was cast as Dick Van Dyke's wife, Laura Petrie, on the Dick Van Dyke Show. Moore insisted that her character be allowed to wear pants on the show because, she informed producers, women in the 60s just didn't wear dresses while at home cleaning house or visiting with neighbors. During the run of the show, she was called "America's Sweetheart."

Diagnosed with Type 1 diabetes in her 30s, Moore was also a passionate advocate and spokesperson for the Juvenile Diabetes Research Foundation.

Moore was born in 1936 in Brooklyn, New York, to clerk George Tyler Moore and his wife, Marjorie. The family moved to Los Angeles while the three children were still young. Moore later revealed that her childhood was chaotic because of her mother's uncontrolled drinking problems. 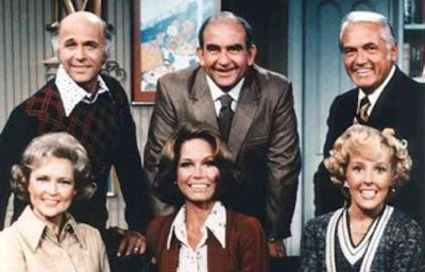 She escaped into dancing, and soon began getting TV and commercial roles, including the dancing elf Happy Hotpoint, on a series of Hotpoint appliances TV commercials which ran during The Adventures of Ozzie and Harriet television show, and Sam, the sexy answering service girl, on the TV show Richard Diamond, Private Detective. In that role, Moore's legs were shown, but never her face.

From 1962 - 1981, she was married to Grant Tinker, with whom she shared the very successful production company MTM Enterprises, which produced The Mary Tyler Moore Show as well as such acclaimed series as The Bob Newhart Show, Hill Street Blues and St. Elsewhere.

Moore attributed their divorce to alcohol.

From 1983 until her death, she was married to Dr. Robert Levine.