Now We Know What Became of Mountain Lion P-39's Kittens

17th known case of a mountain lion killed on a freeway or road in SM Mountains since 2002. 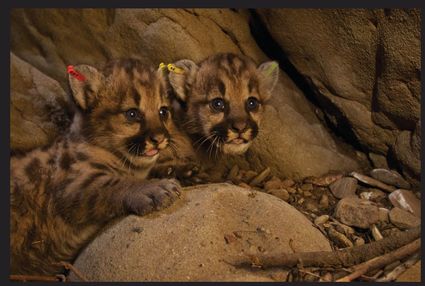 Photos of P-39 and her kittens. Second Mountain Lion Kitten Struck and Killed by Vehicle Near Simi Valley

The carcass was collected by the California Department of Fish and Wildlife (CDFW) one mile east of the Rocky Peak exit on the evening of Jan. 14 and was soon after identified by National Park Service (NPS) researchers as P-51, an eight-month-old kitten. CDFW will perform a necropsy.

The CDFW Wildlife Investigations Lab conducted a necropsy on the sibling, P-52, to determine his overall health, especially because he had been without his mother for a few weeks prior to being struck by a vehicle. At seven months, mountain lions can cover a significant amount of area, but it is unclear to what extent they can survive on their own. The necropsy revealed that P-52 was thin, weighing 24 lbs., but still had adequate internal fat reserves. Additionally, he had fed recently on a skunk - a typical prey item for a kitten learning to hunt.

"It was positive to see that P-52 had recently fed," said Marc Kenyon, CDFW's Mountain Lion Conservation Program Coordinator. "Whether or not these kittens had the ability to feed was a subject of much discussion. Apparently, their mother had taught them predatory skills within their first six to seven months, and we're hopeful the necropsy on P-51 confirms this, too."

This was the 17th known case of a mountain lion killed on a freeway or road in the NPS study area in and around the Santa Monica Mountains since 2002.

"Unfortunately this case illustrates the challenges for mountain lions in the region, where roads are both major barriers to movement and potential sources of mortality," said Dr. Seth Riley, wildlife ecologist for Santa Monica Mountains National Recreation Area. "The area where these animals were killed is part of a critical wildlife corridor that connects the genetically isolated population in the Santa Monica Mountains to what is considered the nearest source population, in Los Padres National Forest."

A hiker/equestrian tunnel that has occasionally been used as an undercrossing is located near where the deaths occurred, but the area lacks adequate wildlife fencing to direct animals to the tunnel.

"Caltrans is aware of the need to protect the biological diversity of the region. To that end, we are working with our partners to study the feasibility for wildlife passage and protection," said Carrie Bowen, Caltrans District 7 Director.

Southern California's extensive road network has been shown to be a major barrier for wildlife and has particularly hemmed in the mountain lion population in the Santa Monica Mountains. A proposed wildlife crossing on U.S. Highway 101 in Agoura Hills would provide a connection between the genetically isolated population in the Santa Monica Mountains and the robust populations to the north. 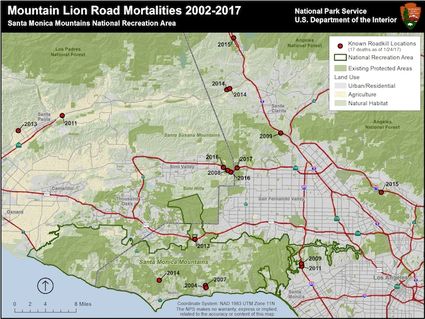 The California Department of Fish and Wildlife manages California's diverse fish, wildlife, and plant resources, and the habitats upon which they depend, for their ecological values and for their use and enjoyment by the public.