Trump Admin Sandbagged on Santa Monica Airport Closure; Will No Doubt Reverse It 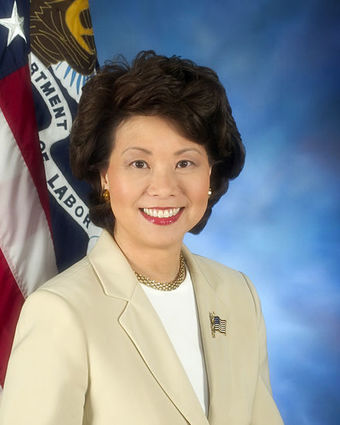 Elaine Chao, 63, is married to Mitch McConnell, has been appointed Transportation Secretary, but has not yet been sworn in.

It seems apparent that the Trump Whitehouse was not told in advance of Saturday's announced closure of the Santa Monica airport, as of 1/1/2029. That's because Donald Trump would never have agreed to it.

At a hastily called Saturday meeting, the City Council approved a settlement with the FAA restricting SMO's use until 2029, followed by its closing and turning over of the land to the City. The timing of the announced settlement, one week after the swearing in of a new Republican President, is hardly an accident. It is a parting shot by an Obama appointee at Trump and his allies. The settlement will not stand, and SMO will not close. Here's why.

The Federal Aviation Administration is headed by Michael Huerta. President Barack Obama appointed him to head the FAA in 2013; he has a five year term.

President-elect Donald Trump's nominee to run the DOT, Elaine Chao, testified before a Senate panel last week en route to what is expected to be an easy confirmation, says the Washington Post. She was deputy secretary of transportation under George H.W. Bush. Chao has not been confirmed or sworn in yet, however.

To understand why this is Huerta's slap in the face to the Republicans, consider two facts: Chao is married to Mitch McConnell, Senate Majority Leader. She has not yet been confirmed, but will be soon, at which time she will become Huerta's boss. https://en.wikipedia.org/wiki/Elaine_Chao

Santa Monica is perhaps the most liberal community in the US. It is filled with the type of people Trump despises; well educated, left wing one percenters. Hillary Clinton came here to conduct numerous fundraisers with Hollywood A-Listers. 88% of Santa Monica voters were With Her in November 2016.

On June 7, 2016, the night of the California Primary election, Bernie Sanders' State HQ was in Santa Monica. At the Airport's Barker Hanger, of all places. A Bernie Sanders rally is very much the kind of "cultural event" that Santa Monica plans for the airport's future.

Why would the Trump administration want to reward Santa Monica with the gift of 227 prime acres, used for 100 years as a municipal airport? The answer is: He doesn't. 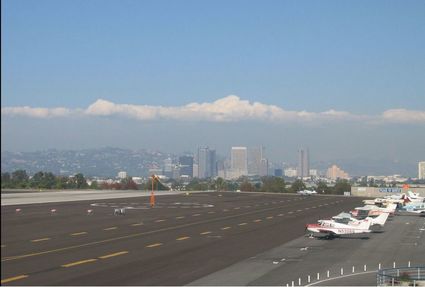 Santa Monica airport is a rich man's club and an irritant to ultra liberal Santa Monica. Why would Pres. Trump want to close it and hand it to the City as a park?

The settlement is the outgoing Democratic administration's gift to the ultra liberal community of Santa Monica, which has many residents vocally in favor of closing its airport and turning it into a park, luxury condos, cultural event venues and overpriced sushi bars. Most of those vocal opponents are vigorously rejecting the settlement. The SM City Council only voted to accept it 4-3, and only after the City Attorney told them at a rare Saturday closed session, that this offer was only on the table until Chao is confirmed. At their final opportunity, the City reluctantly accepted the offer because they know it's their last chance to get rid of the airport, and 12 years is better than never.

The rushed settlement was jammed through in the closing days of the Obama administration, along with a flurry of pardons, executive orders and national parks. Obama did approve the settlement himself; however President Donald Trump or Chao can override it and will probably do so next month.

Stay tuned. There's more here than meets the eye, and it ain't over till it's over.

Won't happen. Donald Trump has spent his career suing to shut down airports like SMO to inflate the values of his properties. Remember when the FAA changed the names of the GPS waypoints around PBI to remove references to him and his family? The FAA claimed it was because of something he said on the campaign trail, but in reality it was retribution for his $1B lawsuit against the agency for airport noise that was devaluing his Mar-a-Lago club, even though he clearly knew the airport was there when he bought the property. It's all just a scheme to shut down the airport and sell Mar-a-Lago for double what he paid for it. He probably has a millionaire buddy who lives next to SMO who is salivating at the thought of his property doubling in value in 12 years. Trump will never fight for GA. He will shut down GA airports and push for policies that will crush GA, such as privatizing ATC.

Frank Gruber and John Fairweather are property owners in the rent controlled Santa Monica monarchy. Their motivation to close the airport is entirely self serving and they are part of the one percent vocal club to close they airport. The facts are that 90% of the complaints are by that one percent vocal minority. It is also not uncommon for the counsel to make backroom deals primarily with local developers and now not to anyone's surprise, the FAA. This still does not excuse the city's plundering of the airports resources. Just last week they excecuted a six year lease with a tech company to utilizes the airports community resources while they created new tenant lease with a 24 hour eviction clause. The city's motivation is quite clear in spite of who controls the FAA.

Santa Monicans are NOT liberals at all. They are the 1% all the way. They may claim to be progressive to pat themselves on the back as they drive their guzzling SUVs, ignoring rampant homeless and building ever larger resource-hogging skyskrapers! Truth be told, they fly out of SMO. This is about a land grab. A peeing contest by rich guys over who can control the land. This is far from over and I expect both sides will be spending millions more of Santa Monicans tax dollars. Funny thing is many of the people fighting for this will long be buried by the time this is through.

This may be the only time in my life where I find myself supporting a Trump decision. Kudos to the other commenters... who are apparently more informed than the general public of Santa Monica. The closing of the airport means far more than most seem to think. The environmental, cultural and accessibility impacts would be devastating - not only to those 99% ers who make their living from the airport, but also to those who live in the area... those who benefit from the open air spaces, the already burdened roads, the abundance of independent stores. Do you really want skyscrapers, drones, chains and traffic everywhere, all of the time? Who benefits from the closing of the airport? Really only a select few- and most likely that does not include you. (SM city council and developers excluded)

There are people on social media saying that this article is fake news. If you think about how this happened on a Saturday when no other Government office is open, it raises red flags. The guy who made the decision is ACTING Secretary of Transportation during the Administration switch. He is actually FAA Administrator. Does this sound like fake news...I think not.

The notion that the community supports closing the narrative is a false narrative propounded by the money-hungry ultra-socialist city council, who have never supported that with a single piece of data. They want to present closing the airport as a nod toward public health and safety, when all they really want is to develop the hell out of that land, creating far more pollution, more car and bicycle accidents, but most importantly, more taxes. I hope the author of this article is correct and Trump's appointee sees this grab for a valuable piece of the federal transportation and safety network for what it is.

What a crock. 'followed by its closing and turning over of the land to the City.' Wrong. The city will be ALLOWED to close it if it wishes, where 'city' means the kangaroo council that sells out to developers at every opportunity. 'Rich man's club?' More regurgitated tripe from those who clearly don't spend any time at the airport among those who work there and use it. The reversal of this sellout would be a nice slap in the face to those who richly deserve it: land-speculating hypocrites who moved next door to an airport and now pretend that it's a hazard. Yes, a hazard that hasn't killed a single neighbor in A CENTURY. Guess what, Santa Monica: YOU ARE THE ONE PERCENT. Any Santa Monica homeowner who complains about something for 'rich' people should be roundly scorned. Santa Monica NIMBYs represent the worst of the' 'liberal' label: entitled whiners who want to steal from everyone else. Smacking them down would be one of the very few benefits of the current travesty in DC.