Genesis Open tees off on February 16, 2017 with the greatest star power in years. 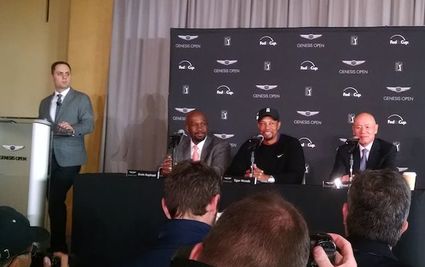 Riviera Country Club is bringing back Tiger Woods for the first time in ten years and introducing a raft of changes for Westside golf fans. When the newly-renamed Genesis Open tees off on February 16, 2017, it will have its greatest star power in years and what it hopes will be a streamlined fan experience.

At a January 23rd press conference, Tiger spoke of making his tour debut at Riviera at the age of sixteen. "I've never felt a club that heavy in my life," he said. "I realized I have so far to go and I'm not that good... I've got to get a lot better, and 25 years later here we are."

Asked why he's skipped the tournament over the last decade, Tiger explained "I've always loved playing Riviera, I've just never played it well." He missed "the SoCal attitude" and "the whole beach thing," but admitted that he has been spoiled by the warmer Florida waters.

"My roots are here in southern California [but] that Pacific Ocean is colder. I'm used to that warm water out there in the Gulf, [and] I don't know if I could get out in the water like I used to do."

Don't expect to run into Tiger on the Promenade during the tournament, though. Once play starts, "I'm usually pretty focused on winning a golf tournament." He may go out to dinner with other tour players or his hometown friends, but the week is about the trophy for Tiger. Despite his recent health woes and back surgeries, he is "very excited about getting started with the season. I've missed playing. I've missed competing."

The Genesis open will be the third of four tournaments for Tiger in a five week stretch after his long layoff, but he believes that his health is where it needs to be for him to compete. If his back will let him prepare, "I know I can shoot scores and I know I can win tournaments."

This will be Tiger's first year as tournament host and the first year for Genesis Motors as the title sponsor. Genesis is using the Open to introduce the public to its new lines of luxury cars, intended to compete with BMW's 7-series and Mercedes S-class cars. Promising "human centered" luxury, Genesis intends to offer cars that focus on the driver and not the brand.

At the Open, Genesis will host fans at a free hospitality area off the 14th hole, with television monitors and seating for an elevated view of the green. Inside, would-be pros can have their putting strokes videotaped and analyzed by teaching pros, who will offer critiques, tips, and helpful drills.

The management of the Open will be done by TGRLive, Tiger's event management arm, who are bringing significant changes to the event's logistics.

Instead of having parking at the Veteran's Administration property at Wilshire and San Vincente, Santa Monica will now be ground zero for tournament fans. Taking advantage of the new Metro service to downtown, shuttle buses will run from the Wilshire end of the Promenade to a special gate at Riviera. Out-of-towners will be directed by uniformed Genesis "ambassadors" to walk from the Metro station to the bus pick-up, hopefully spending money along the Promenade as they go. Riders will not need to show a tournament ticket to use the shuttle.

Those who choose to drive to Santa Monica will have to contend for parking spots in the city-owned structures surrounding the Promenade and pay the posted rate, up to a daily maximum of $17.50.

Uber is a transportation partner, and new riders can use the code "Genesis17" to get a free ride, up to $15, to the tournament. Uber, taxis, and hired cars will have to drop passengers off at Revere Middle School, where a new path through the wash will take spectators to the course. At press time no information was available about parking services for bicycle riders.

In addition to Tiger's return, the tournament boasts the presence of the 2016 Player of the Year and US Open champion Dustin Johnson, the 2016 PGA champion Jimmy Walker, and the Olympic Gold medalist Justin Rose. Perennial fan favorite Phil Mickelson returns this year, as will Jordan Speith, Jim Furyk, Ernie Els and defending champion Bubba Watson.

Belgium's Thomas Pieters, who set a rookie record for points in the 2016 Ryder Cup for the European side, received a sponsor's exemption to the tournament. Matt Kuchar, J.B. Holmes, Brandt Snedeker and Brooks Koepka join Johnson, Mickelson, Speith, and Walker to make 8 of 12 American team members playing at Riviera.

Tiger was a vice-captain for the team, and hopes to return to play next time. A good first step would be to win at Riviera, where his tour career began. 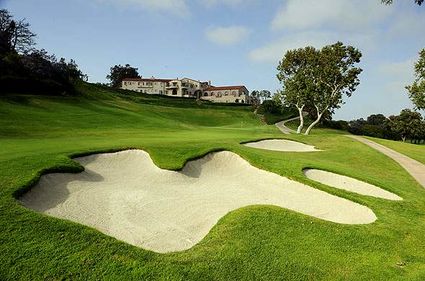 As host, he has "come full circle [to] where it all started." His Tiger Woods Foundation is the featured charity for the event, and its Earl Woods Scholars Program has supported 149 students from underserved communities to attend college. In addition, its TGR Learning Lab has brought STEM studies to over 145,000 students in struggling areas. Tiger hopes to expand its reach into the internet through TGR EDU: Digital, a partnership with Discovery Education.

Quite an accomplishment for the man who began his odyssey at Riviera as a quaking teenager. Tiger recalled that he was so skinny "I looked like a 1-iron." Riviera Corporate Officer Michael Yamaki remembered Tiger's first days at Riviera because his mother Tilda would keep him from practicing putting or going to the driving range until he had finished his homework. He said "It was, 'Tiger, did you get your homework done?' 'Yeah, Mom.' 'Okay, half an hour.'"