LASD Calls Shooting of Vasquez at 3300 Pico "Suicide by Cop" of a suspect wanted for murder.

Simi Valley Police wanted him for trying to kill his roommate on February 3, 2017

The 3300 block of Pico Blvd, from Google maps

Gerardo Vasquez stabbed his roommate in Simi Valley on Saturday, then led Police on a chase to Santa Monica. He got out of the car and waved a knife at officers, apparently hoping they would grant his death wish. They did.

Sheriff's investigators identified the dead man as Gerardo Vasquez, "male Hispanic, 52 years-old." Simi Valley Police wanted him for trying to kill his roommate on February 3, 2017. He fled the scene after the stabbing and was considered "armed and dangerous."

Sheriff's said that after the officer-involved shooting occurred, the suspect fell onto his side, and yelled out an expletive at the officers and asked "if that is all they had!" Vasquez then raised the large knife over his shoulder and was in the process of throwing the knife toward the officers when they pumped yet more lead into him. The dying man managed to throw the knife which landed near where the policemen were standing. 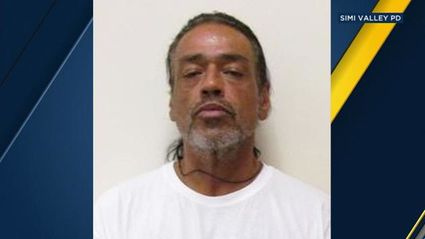 Gerardo Vasquez, 52, stabbed his roommate in Simi Valley, then fled to Santa Monica and threatened LASD officers with a knife.

One of the officers also used a less-lethal shotgun to fire bean bag rounds at the suspect. A large knife believed to belong to the suspect was recovered at the scene. "Based on the above, this appears to be a suicide by cop incident," the LASD concluded.

Reportedly, the incident began when CHP officers tried to make contact with a man spotted running on and off lanes of the eastbound 10 Freeway at the Centinela exit to the Freeway.

Sheriff's officials said the suspect was armed with a knife and charged toward the responding CHP officers. The officers then opened fire, one using non-lethal means.

The suspect was struck by gunfire and transported to a nearby hospital, where he was pronounced dead. No officers were injured during the incident.

A Sheriff's spokesman said that a knife belonging to the suspect was recovered at the scene. Up to a dozen shots were fired at the suspect.

Pico Blvd was closed immediately west of the incident for closed for up to six hours as officials investigated the scene.