Most American Football Field Goals Made In One Minute 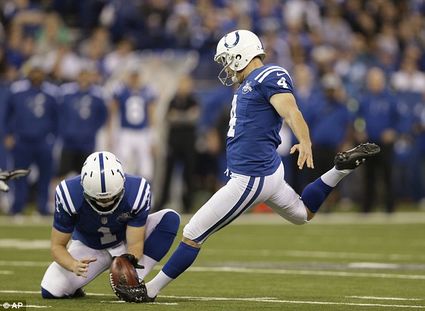 In addition to setting this new record, Vinatieri earned 1.5 million NFL Extra Points (equivalent to $15,000) for the Pat Tillman Foundation, the namesake of the former NFL player who put his NFL career on hold to serve in the military following 9/11. The donation, made on behalf of Barclaycard, will be used for academic support and scholarships for Tillman Scholar military veterans.

"I'm thrilled to have set a new GUINNESS WORLD RECORDS title, but even more excited that the attempt benefitted the Pat Tillman Foundation," said Vinatieri. "The NFL Extra Points Credit Card has had an outstanding partnership with the Pat Tillman Foundation the last few years and it means the world to me to be able to help them. Given my father is a military veteran and my brother is on active duty, this cause is close to my heart."

"Watching Adam set a new GUINNESS WORLD RECORDS title from the sidelines was an incredible experience and NFL Extra Points Credit Card and Barclaycard are delighted to donate $15,000 to the Pat Tillman Foundation to commemorate the achievement," said Michael Bolmer, vice president marketing partnerships, Barclaycard. "The donation will empower Tillman Scholars as leaders to serve our country and communities in new ways out of uniform."

About Barclaycard US- Headquartered in Wilmington, Del., Barclaycard US is one of the fastest growing top-10 credit card issuers in the nation. The company creates customized, co-branded credit card programs for some of the country's most successful travel, entertainment, retail, affinity and financial institutions. For more information on Barclaycard please visit BarclaycardUS.com.