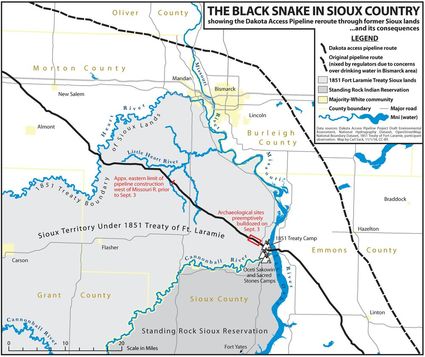 More than 120 investors have written a statement to banks financing the Dakota Access Pipeline advising them to promote a new route: "We call on the banks to address or support the Tribe's request for a reroute and utilize their influence as a project lender to reach a peaceful solution that is acceptable to all parties, including the Tribe."

The investors, representing $653 billion in managed assets, fear an escalation of conflict and contamination of the water supply to the Standing Rock Sioux Reservation. Several municipalities across the nation have already voted to withdraw assets from banks that are financing the construction of the pipeline.

The approved pipeline route goes under the Missouri river which is the only source of water for the tribe. An earlier route proposal was rejected for posing the same kind of water source threat to the city of Bismarck, ND.

With the Missouri as a major contributor to the Mississippi, a leak could poison waters all the way to New Orleans.

The investor's statement says they "support the Standing Rock Sioux Tribe's request for a reroute of the Dakota Access Pipeline (DAPL) that avoids their treaty territory." The land use territory of the tribe, based on a 1851 treaty, extends far beyond the borders of the reservation. A 1980 Supreme Court decision (United States v. Sioux Nation of Indians, 448 U.S. 371, 388) upheld the tribe's control of lands now being claimed for use by Dakota Access.

The tribe has objected to the pipeline since at least 2014, primarily through the courts, with on-the-ground "water protectors" camped out since April of 2016. DAPL has used both private and state police to fight the peaceful protesters with an assortment of weapons, including pepper spray, rubber bullets, and attack dogs. They have even sneaked in at early morning hours to plow under sites that were scheduled for for archeological review as native burial grounds. Reporters trying to cover the events have been arrested and charged with a variety of crimes.

The Standing Rock have received global support for their efforts, with protests erupting in many major cities, and representatives from indigenous peoples across the planet visiting the protest encampment.

President Donald Trump, apparently living in a corporate bubble and oblivious to the real world, cheerfully signed paperwork to accelerate the construction by avoiding required environmental reviews. "As you know, I approved two pipelines that were stuck in limbo forever," he said, adding "I don't even think it was controversial."

Legal challenges by both the Standing Rock tribe and the Cheyenne River Reservation further downstream have halted construction on the territorial lands, but construction has resumed below the contested area. Dakota Access believes that if they get enough pipeline built, they will be able to convince the courts to allow completion on the basis of economic loss.

Perhaps they have underestimate the power of a resistance that can undermine economic support.

Below is the text of the letter written by bank investors:

The undersigned investors, representing $653 billion in assets under management, encourage the banks listed above to address or support the Standing Rock Sioux Tribe's request for a reroute of the Dakota Access Pipeline (DAPL) that avoids their treaty territory1. We believe this is warranted to protect the banks' reputation and consumer base and to avoid legal liabilities. As investors we are very concerned by the reputational and potential financial risks due to these banks being associated with DAPL.

Since 2014, the Standing Rock Sioux Tribe has opposed DAPL's projected route, which crosses their drinking water, sacred sites, and treaty territory. The Tribe has further noted that development of the projected route did not meet the international standard for consultation for Free, Prior, and Informed Consent and there have been serious and credible allegations of irregularities regarding the environmental review for DAPL. We understand a number of the banks listed above have commissioned a report by Foley Hoag on the adequacy of the consultation process followed by Energy Transfer Partners, the lead project developer. In December 2016, the US Army Corps of Engineers denied Energy Transfer Partners the easement needed to complete construction, and announced plans to prepare an environmental impact statement and explore alternative routes. Following President Trump's issuance of a memorandum directing approval, the Army Corps abruptly shifted course and on February 8th granted the final easement required for DAPL's current project route. The Tribe has vowed to fight any alteration of the environmental review process in court.

We are concerned that if DAPL's projected route moves forward, the result will almost certainly be an escalation of conflict and unrest as well as possible contamination of the water supply. North Dakota state and local governments have spent over $22 million on law enforcement costs since August 2016, and demonstrators have already been arrested and cleared from the area with considerable use of force.

Banks with financial ties to the Dakota Access Pipeline may be implicated in these controversies and may face long-term brand and reputational damage resulting from consumer boycotts and possible legal liability. As major shareowners of these banks, we are very concerned about the financial risks this poses to the investments we oversee and to those whom we serve as fiduciaries. To date, we understand that consumers have closed bank accounts worth over $53 million-and are threatening to pull another $2.3 billion- from the banks financing DAPL. We note that ABN AMRO announced recently it would discontinue its lending relationship to Energy Transfer Equity if "an acceptable non-violent solution [is not] found among all parties impacted by the construction of the DAPL, including the Standing Rock Sioux Tribe."

We understand that the banks providing the project finance have contractual obligations to DAPL, but the extreme controversy tied to the project warrants their urgent action. The Standing Rock Sioux Tribe has repeatedly stated that they do not oppose energy independence, and would be amenable to a reroute of the Dakota Access Pipeline that avoids their treaty territory. We call on the banks to address or support the Tribe's request for a reroute and utilize their influence as a project lender to reach a peaceful solution that is acceptable to all parties, including the Tribe.

1 The Standing Rock Sioux Tribe's treaty territory extends well beyond the borders of its reservation. In its 1980 decision United States v. Sioux Nation of Indians, 448 U.S. 371, 388, the U.S. Supreme Court ruled that the Standing Rock Sioux territories (including Lake Oahe) were wrongly removed from the Tribe's control by the U.S. government and recognized its claim. The U.S. government offered compensation, but the Tribe did not accept the offer as a replacement for control of the territory.

on behalf of the New York City Teachers' Retirement System,

Coordinator of Justice, Peace and Integrity of Creation

Congregation of Sisters of St. Agnes

Everence and the Praxis Mutual Funds

Leadership Team of Our Lady of Hope Province

General Board of Global Ministries, The United Methodist Church

Pension Plan of The United Church of Canada

Province of St. Mary of the Capuchin Order

Sisters of Charity of Nazareth

Director of Peace, Justice and Integrity of Creation

Sisters of Charity of New York

Sisters of Instruction of the Child Jesus

Coordinator Office of Justice and Peace

Sisters of St Joseph of Springfield

Sisters of St. Francis of Philadelphia

Sisters of St. Joseph of Boston

Sisters of the Holy Names of Jesus and Mary

Sisters of the Holy Names of Jesus and Mary SNJM

Sisters of the Humility of Mary

Sisters of the Order of St. Dominic

Sisters of the Presentation of the BVM, Aberdeen SD

The United Church of Canada

Ursuline Religious of the Diocese of London in Ontario 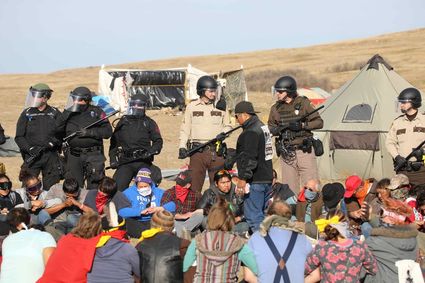