Feminists Pillory Emma Watson for Bearing her Breasts in Photoshoot 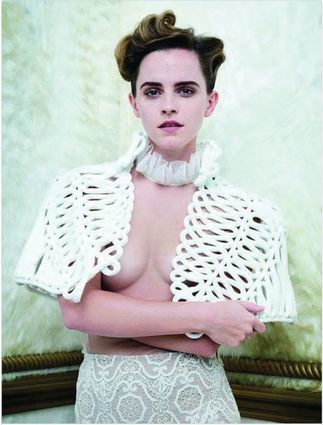 We are reminded of that old joke: How many feminists does it take to change a lightbulb? Answer: "I don't know, and that's not funny!"

A photoshoot in March Vanity Fair magazine has led to criticism of actress Emma Watson. A link to the photoshoot is at the bottom of this article

Photos Stone taken by fashion photographer Tim Walker exposing her breasts, have led some people to dismiss her history of fem/liberal advocacy. The Harry Potter actress was predictably pilloried on social media. Her reaction? "Feminism is not a stick with which to beat other women."

The shoot "felt incredibly artistic and I've been so creatively involved, and engaged with Tim, and I'm so thrilled about how interesting and beautiful the photographs were," Emma Watson told Reuters of the shoot.

In one photograph, Watson stands in a room with fur-covered walls. In another, she is trapped in what appears to be a birdcage. And in another, her breasts are loosely covered by a white crocheted capelet.

One popular British radio commentator, Julia Hartley-Brewer, tweeted a photograph of the Sun's page 3, which reproduced the photo with the headline "Beauty & the breasts." 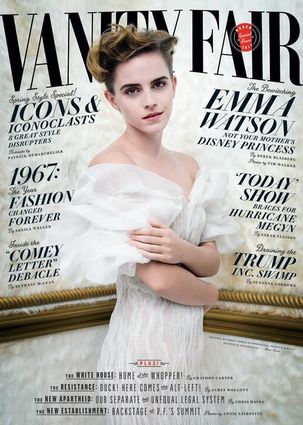 Emma Watson: "Feminism, feminism ... gender wage gap ... why oh why am I not taken seriously ... feminism ... oh, and here are my tits! Hartley-Brewer tweeted. The tweet was liked 4,500 times and retweeted more than 2,150 times, as of early Monday morning.

Other users fired similar barbs at the 26-year-old actress.

"Attention seeking hypocrite. acting like a slut and flashing her tits is not what a real feminist does," tweeted one. "Is Actress and Feminist Emma Watson a Hypocrite for Going Topless in Vanity Fair?" asked the Hollywood Reporter's Pret-a-Reporter. "Did Emma Watson pose 'topless' because of the patriarchy or despite of it? I doubt she knows herself," announced one particularly bold headline in the Independent.

No doubt everyone will soon say it empowers women. Which is what breasts have done since the beginning of time, after all.

Wrong Emma. What exactly do you do for a living?