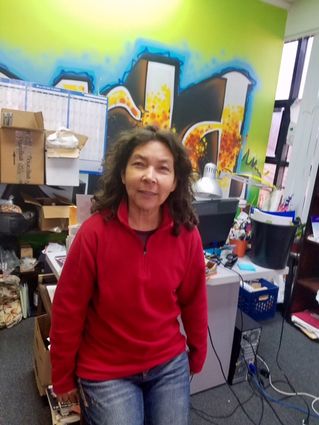 On April 29th, 2017, a local Wilmington group called PCM, (People's Climate March), will march in the community for environmental justice.

The focus for this march is the current Tesoro(formerly known as Texaco) refinery merger project which plans to merge two refineries together, one in Wilmington, the other in Carson, rendering it the largest refinery on the West Coast. This merger threatens the community with serious climate change and health implications for the residents.

The organization, CBE (Communities for a Better Environment), a 501 c non-profit group, purports to clean up neighborhoods with its "ground breaking environmental justice strategy that will reduce and prevent pollution throughout these communities."(www.cbecal.org)

Alicia Rivera, the lead organizer for the Wilmington branch of CBE is helping to organize the local residents' April climate march, which focuses its fight against the current Tesoro merger project and the fossil fuel industry.

Tesoro project's incipient phase began back in 2015. It was slated to be finished in March 2017, according to the Daily Breeze:

"Tesoro Corp. is seeking public and regulatory approval of plans to further integrate its two South Bay refineries into one mammoth petroleum-processing operation, but concerns about environmental fallout already are mounting.

The Los Angeles Refinery Integration and Compliance Project would create the largest single oil refinery on the West Coast, greatly increasing the amount of crude that could be stored at the combined Wilmington and Carson facilities.

The two neighboring facilities - both constructed in 1923 - are on a combined 950 acres bordered on the north by 223rd Street, the south by Pacific Coast Highway, the west by Wilmington Avenue and the east by the Dominguez Channel.

The South Coast Air Quality Management District is gearing up for a large-scale, state-mandated scientific study of the potential adverse health and environmental effects of the project. Once the study is finished, public comment will be sought and a revised report will be issued, followed by another public comment period. Construction is slated to begin in July and finish in March 2017."

Alicia Rivera, who immigrated to the United States from El Salvador, over twenty years ago, began her career in Wilmington when she was hired in 1994 by an environmental justice organization to work on the Texaco refinery explosion. (Texaco is now Tesoro). In 1996, Alicia joined CBE.

According to Alicia, the homes in Wilmington are less than a mile from the refineries. Residents are seriously impacted by the close proximity to the toxic emissions.

Alisha says that the homes and schools are in vulnerable communities. "The air quality is very poor and extremely toxic and has health impact resulting in asthma, respitory conditions, coronary illnesses, lung conditions, allergies and cancer."

There are five refineries in Wilmington that spans 20 square miles. Alicia explained that 85 per cent of the residents are poor Mexicans. The issues are two fold; environmental and racial injustice that deleteriously eclipse the South LA community. By organizing and educating of the adults and youth in the area, CBE, through Alicia’s leadership, is able to help fight the injustices caused by the oil industry.

Alicia voices her concerns for environmental injustice in Wilmington. When talking about a subset of CBE, Youth for Environmental Justice, Alicia’s voice is quite compelling; The Banning high school students, who formed the Youth for Environmental Justice, filed a lawsuit. Alicia explained, “a lawsuit was filed on behalf of the youth in South LA and Wilmington against the city of Los Angeles, to address the disparities in permits and requirements for oil drilling operations that discriminated against communities of color. The city negotiated so the inequities have been addressed.”

Moving forward, Alicia explained, “We are now defending against the oil industry counter lawsuit.” Apparently, in 2016, CIPA the CA independent Petroleum Association counter sued the Youth and the City arguing they should have been a part of the negotiation. This case is still pending.According to CBE, whose mission is to:

"achieve environmental health and justice by building grassroots power in and with communities of color and working class communities," the young people, through Youth EJ have won some of the environmental policies including strong regulations of oil refinery emissions. It has been CBE's experience that "organized communities can move mountains."

CBE in Wilmington has been monitoring and advocating for cleaner oil refinery practices since 1997. Although it's true that "organized communities can move mountains," it's also true that CBE still has much work to do in dealing with the emissions and the impact they have on the residents in Wilmington.

Ms. Rivera gave a bleak account of the community's victims of environmental, health, racial, and economic injustices. Women and children, whose homes are less than a quarter of a mile from the refineries, continue to suffer with brain cancer, head tumors, blood type cancers such as leukemia and lymphoma. These diseases permeate Wilmington and have caused grave human suffering.

Alicia said, about the illnesses, "they are expected to be caused by the proximity to the oil refineries that emit carcinogens and asthma caused by the emissions.

Alicia visits the families' homes and encounters many people who experience different kinds of ailments that might be attributed to the quality of the air those they breath.

""A woman in her early forties suffered from brain cancer a few yards way from the Philips 66 refinery. She is unable to pay for her medication. She paid out of her own pocket and can't afford to take the three pills a day recommended by the doctor. She takes one pill a day so it can last whenever she feels able to work in a plastic making factory so she can earn money to buy the medication. She has three small children in grade school."

Alicia also gave an account of a child stricken with asthma. She explained:

"A mom has a teenage daughter with bad asthma attacks. They also live near Philips 66, about a quarter of a mile from the refinery. When the child get asthma attack she keeps waiting, hoping it will get better with the treatment. The girl and mom took classes from the community, (Long Beach children with Asthma Organization). The classes provide information on how to handle the asthma attacks but when nothing works she has to call the ambulance and says, she waits till her daughter turns blue, then knows it's time to call. She's always afraid if she going to make it one time. The bill is high. Her co-payment is high. The mother can't afford it. She works part-time." 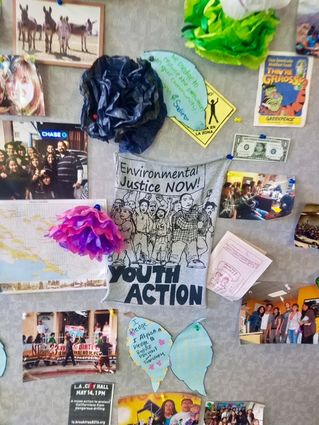 Community center in Wilmington. merger threatens the community with serious climate change and health implications for the residents

Alicia noted that often the asthma treatments and devices don't work. Another member of the community whose daughter also has asthma had tried the inhaler and other gadgets, but none of them worked, and the mother has to take her child to the emergency room.

In the on going struggle for health justice, is a constant threat of not being able to breath. IT's a cycle. The children have to miss school. The school doesn't get tuition from the absent student. The parent has to hire someone to take care of the child, since that parent works. It's as Alicia says, a "cycle of economic implications."

In April the PCM will have their march to fight environmental injustice and once more, attempt to move mountains.

For more information about CBE, please visit the website.