"Cat on a Hot Tin Roof" until May 7th 2017 at the Kiki & David Gindler Arts Center, Glendale 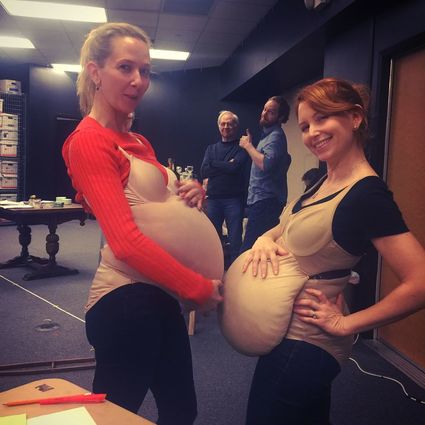 Cast clowning around with pregnancy vests back stage.

You really couldn't ask for a better play, venue or team of truly top flight actors.

The story is set in the early 1950's in America's Deep South and presents what could easily qualify as the most dysfunctional family ever. Throughout the performance you will witness an abundance of mendacity, greed, superficiality and sexuality as the family connives and every family member works to grab as much of their father's estate as they possibly can. Adding to the drama is the belief by the father, "Big Daddy" that he has been cleared of cancer when in fact something far more devastating is the truth.

It is a rather long play running nearly three hours with two ten minute intermissions but despite that it is strong enough and so well presented that it totally grabs and holds the audience the entire time. Act One is mostly a one way discussion by Maggie [played by Linda Park on the day I saw the show] and her slightly disabled and abundantly alcoholic husband Brick [played by Daniel Bess]. The sheer energy and focus demanded of the role of Maggie in Act One is in and of itself a compelling element and magnificently executed by Linda Park. It becomes very clear that Maggie and indeed the entire family is in a state of extreme nervous worry also known as being like "a cat on a hot time roof."

By Act Two the relationship between Big Daddy [played by Mike McShane] and his son Brick is explored in depth along with the introduction of other elements that take you into Act Three where the entire family is fully exposed and the truth of the Big Daddy's real health condition of being on the very brink of death explodes the family into a wild fury of mendacity, pain and at least some possible redemption. 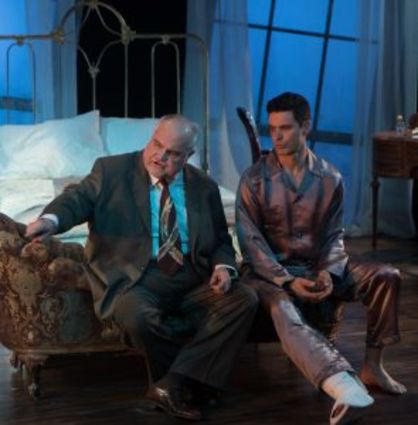 "Cat on a Hot Tin Roof" is a very strong and powerful play that rips at your emotions. There is some humor, of course, but mostly it exposes greed and struggle within one very wealthy but deeply wounded family. Without great acting it could easily be a disaster. Fortunately the Antaeus Theatre Company meets this challenge in its true fashion by providing some the finest theatrical acting in town.

"Cat on a Hot Tin Roof" is playing now through May 7th 2017 at the Kiki & David Gindler Performing Arts Center, 110 East Broadway, Glendale, California 91205. For reservations and ticketing either go online at: http://www.antaeus.org or call: 818-506-1983. It is a great show but the language is at times very harsh and there is some brief nudity so I would not bring the young or hyper sensitive. Now enjoy the show.

To enjoy a different form of art you should also visit here: http://www.ebay.com/usr/ronirwinart