When asked "What matters to you and why," Ziad Ahmed wrote #BlackLivesMatter 100 times 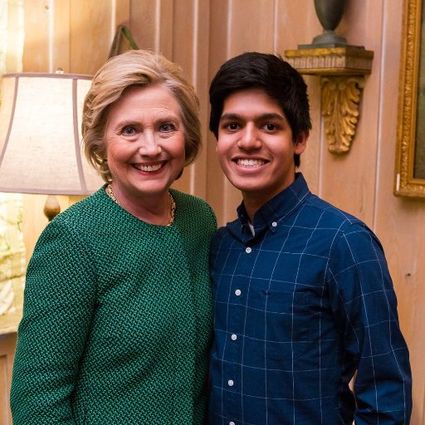 When Ziad Ahmed faced his college applications to Stanford University, California's most prestigious private college, he gave the perfect answer for today's politically correct admission committee. The application asked "What matters to you and why?" Ahmed wrote #BlackLivesMatter 100 times, and got admitted. Even though he's not black. Genius, right?

Because after all, that proves he's qualified, right? Anyway, the Pakisatani American tweeted his application and admission, and the story went viral.

"I was actually stunned when I opened the update and saw that I was admitted," Ahmed wrote in an email to Mic, the millennials-centric media company. "I didn't think I would get admitted to Stanford at all, but it's quite refreshing to see that they view my unapologetic activism as an asset rather than a liability."

A senior at Princeton Day School in Princeton, N.J., Ahmed - whose Twitter handle is @ziadtheactivist - said the #BlackLivesMatter movement is inherently important to him because he is Muslim: "To me, to be Muslim is to be a BLM ally," he said, noting that "one-fourth to one-third of the Muslim community in America are black... and to separate justice for Muslims from justices for the black community is to erase the realities of the plurality of our community."

The Bangladeshi-American teen has already been recognized for his activism. In 2015, he was among MTV's Top 9 Teens Changing the World, while, in 2016, he was named one of Business Insider's Top 15 "young prodigies" making the world a better place. Now 18, Ahmed also has given a Tedx Talk in Panama about the impact of stereotypes. And he is the founder of Redefy, "an organization committed to fighting bias and stereotypes."

His Twitter announcement set off the usual social-media explosion of congratulatory comments and denunciations. Some respondents asked to know his grade point average and SAT scores. Presumably, they're quite good; Ahmed also was admitted to Yale University and Princeton University, Mic reported, though it didn't give any details about his application essays for those schools.

Other online commentators said Ahmed should have written a formal essay, addressing the "why" part of the application question.

His response to Mic was this: "The insistence on an explanation is inherently dehumanizing. Black lives have been explicitly and implicitly told they don't matter for centuries, and as a society - it is our responsibility to scream that black lives matter because it is not to say that all lives do not matter, but it is to say that black lives have been attacked for so long, and that we must empower through language, perspective, and action."

The National Review responded with an essay, calling Ahmed a "lazy activist" and a "lazy question-answerer" for not explaining his position: "Think about it: Could you imagine if Ahmed someday approaches a thesis the same way that he approached that application question?" asked reporter Katherine Timpf. What if he turned in a "one-sentence paper, believing that his point of view was so clearly correct that it was somehow above him to explain?" 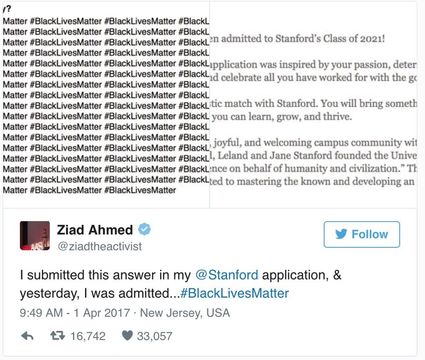 If Ahmed wants to change the opinions of those who don't agree with him, Timpf argued, it is incumbent upon him to build a detailed argument.

Reached for comment, a Stanford spokesman said, "We do not discuss student applications."

Whatever his approach, Ahmed keeps meeting movers and shakers.

In 2015, while attending an Iftar dinner at the White House - an annual reception during the month of Ramadan - he got to chat with President Obama. Ahmed told MTV that he and the president discussed "counter-terrorism and Palestine and Israel. And we talked about education; girls' education. It was just the most enlightening and intellectual and informative conversation I could ever be part of. It reminded me of what I'd said before: Teens don't realize we need to be in this conversation, injustice is our fight too."