UCSD offers concerts with the fish.

If you haven't seen a flamboyant cuttlefish before, picture this: a plushy purple almond of about three inches long, abutted at one end with a set of ten lacy wire appendages, one or two of which seems to be bent perpetually up in what looks curiously like a hand giving you "the finger."

Two of those appendages, the arms, beard languidly down from the chin and become a set of legs, manoeuvering in a left-right-left pattern along the sand, just the way a human would walk – except trailed by three inches of posterior plushy almondness. Oh, and the flamboyant cuttlefish changes color. In the span of a few moments, you can see a violet-and-sunflower clown darken to a burgundy that becomes utterly black, before sunrising again into sandy-beige. Dark stripes undulate along the body like the loading bar of a 2000s computer game bar, but this is no game: The tide of stripes warns of the coming storm. These animals may look like almond-butted, 3-inch-long mutated squids, but when it comes to defending their territory and the right to mate, flamboyant cuttlefish are far from clowning.

Cuttlefish are just one of the unusual creatures that fascinate visitors to the Birch Aquarium, at the Scripps Institute of Oceanography, the first building erected for the sole purpose of aquarium education in La Jolla, CA in 1903. Aside from the hypnotizing column of opalescent sardines that swirl near the entrance, the aquarium boasts a huge kelp forest tank rife with surprising giant sea bass and scintillating silver leopard sharks.

In addition, the aquarium prides itself on its prowess in breeding and keeping the eternal mystery of the Syngnathidae (pipefish, sea dragons, and many many seahorses). Since these animals are so delicate and endangered, it is rare to see them in aquariums in such diversity and abundance, and this represents an important symbol of hope for resurrecting the seahorse populations that have dwindled over the past century due to commerical plunder and climate change.

As an echinoderm expert in an English major's body, I was particularly struck by the variety of echinoderms (sea stars, urchins, sand dollars, sea cucumbers, etc.) Many aquariums display some classic five-armed "starfish." But how many can boast a plethora of brittle stars, as well as a basket star, snake star, and some live feather stars? Peering into a dusk-blue cave, my mom remarked that a certain small red asteroidean plastered to the rock wall looked unusual to her. "Its arms are skinnier than usual," she told me. "It's definitely not a normal sea star."

"A normal sea star?" I repeated, incredulous. I explained that so-called normal stars, the asteroidea, are any stars wherein the five or more arms each connect at the base, forming four angular "armpits." The "abnormal" stars, such as brittle stars in the class Ophiuroidea, are easily recognized by their centipedian arms that feed independently into the oral disk, a sort of flattened frosting flower. This allows the abnormal stars to run infinitely faster, and reinforces the ocean's constant lesson that different can be good.

I knelt a long time by the black feather stars, little fern-like contraptions that clung to corners or corals, but could also swim like a traumatized spider if need be. Next door to those were some chocolate chip sea stars, which my mom said more closely resembled whipped egg whites baked atop a lemon meringue pie. "They should have been called the whipped egg white stars," she remarked to me later. I told her she might want to pursue a career on the creative side of marine biology. They need some more creatives. After seeing all the art and reality of beauty at the aquarium, she was not averse to the idea.

The obligatory touch-tank is set in a natural looking rock pool, which was miraculously ignored by local seagulls – perhaps they were wary of the volunteers' watchful eyes. But it is hard to bend over an articificial rock pool and peer into it when a glance in the opposite direction reveals the thief of all shows here on the Pacific Coast: the ocean itself, an endless blue horizon bejeweled by birds and silk-swept by clouds chasing the sun. The outdoor deck takes advantage of the aquarium's ideal location to allow visitors to observe San Diego bustling against the edge of the slow marble ice of the ocean, extending forever beyond. 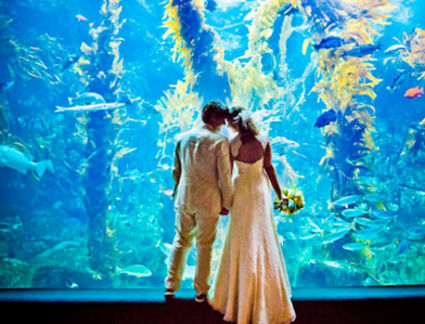 Did you know you can get married in a kelp forest?

The Birch Aquarium not only offers education on its marine life, but also presents their plight and life stories in engaging ways through a variety of art forms. From the selfie-begging sharks hanging from the ceiling in the lobby, to UCSD marine biology and conservation professor Octavio Aburto's photo series Mexican Seas/Mares Mexicanos that splashes nature's vivid paints across select walls, to the three giant whales breaching in fountains in the courtyard, this aquarium knows the value of art for science. The Birch Aquarium educates and inspires visitors to do something to save ocean ecosystems from human damage, as well as unfurling the timeless mystery of the ocean within the minds of imaginations young and old.