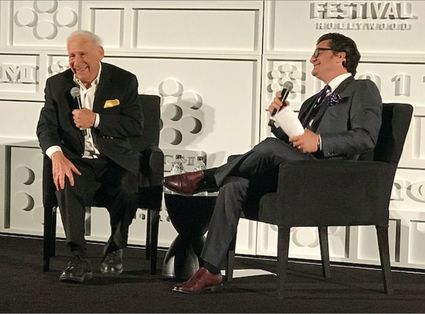 Photo of director, producer, writer and actor Mel Brooks being interviewed by TCM host Ben Mankiewicz at the screening of Brooks' film, "High Anxiety", at the TCL Chinese Theater on April 7, 2017.

The TCM Classic Film Festival returned to Hollywood for its eighth consecutive year on Thursday, April 6, 2017. This year, the four-day film festival celebrated the Golden Age of Comedy. From low-brow to high-brow, from slapstick to sophisticated, and from lone clowns to comedic duos to madcap ensembles, the festival celebrated a broad array of comedic gems, many of which haven't been screened in movie theaters for decades.

This year's festival celebrated the life and memory of Robert Osborne -- actor, film historian, and principal television host for the cable channel Turner Classic Movies. Osborne passed away on March 6, 2017.

The festival also honored father-son duo, Rob Reiner and Carl Reiner, with a hand-and-footprint ceremony outside of the TCL Chinese Theater.

One of the festival highlights was Ben Mankiewicz's interview of director, producer, writer and actor Mel Brooks in advance of the screening of his Alfred Hitchcock homage/spoof "High Anxiety" (1977) at the TCL Chinese Theater. Brooks, now 90-years-old, lit up the stage and was his typical animated and hilarious self. He talked about his longstanding respect and admiration for Hitchcock, and said that he had sent Hitchcock a draft of the screenplay before the film was made. Hitchcock loved it!

Another highlight was the Roosevelt Hotel Poolside screening of "Willy Wonka and the Chocolate Factory" (1971). TCM host/actress Illeana Douglas interviewed three lead actors from the movie in advance of the screening: Julie Dawn Cole (who played the filthy rich/very bratty girl, Veruca Salt), Paris Themmen (who played the obnoxious boy with the cowboy hat and toy gun, Mike Tee Vee), and Rusty Goffe (who played the head Oompa Loompa).

Julie Dawn Cole said that she celebrated her 13th birthday on the set of "Willy Wonka", but has since retired from acting and now works as a child psychotherapist. She had thought, as a child star living in the United Kingdom, that she would be forced to come to Hollywood, but, in fact, she never made it to Hollywood until the 2017 TCM Classic Film Festival.

She confessed that all of the girls in the young cast were madly in love with Peter Ostrum, who played the lead role of Charlie Bucket. Multiple castmembers also said that, while they were shooting on a soundstage in Germany, director Bob Fosse tried to kick them off of the soundstage in order to shoot his film, "Cabaret".

A third highlight was Ben Mankiewicz's interview of writer and actor Buck Henry, the screenwriter of "The Graduate", before the festival screening of the new 50th Anniversary 4K restoration of the film at the TCL Chinese Theater. Buck Henry talked about how Dustin Hoffman was not the original choice to play the male lead. The film's director, Mike Nichols, wanted to cast Robert Redford, who had the look that Nichols had envisioned for the male lead. But when Redford read the script, he didn't "get it".

Buck Henry also said that, in order to play the lead in "The Graduate", Dustin Hoffman had to be released from a contract to act in a much smaller role as a Nazi in Mel Brook's film, "The Producers". But since Mel Brook's wife, Anne Bancroft, played the female lead, Mrs. Robinson, in "The Graduate", getting Hoffman released from his contract with Brooks wasn't difficult. 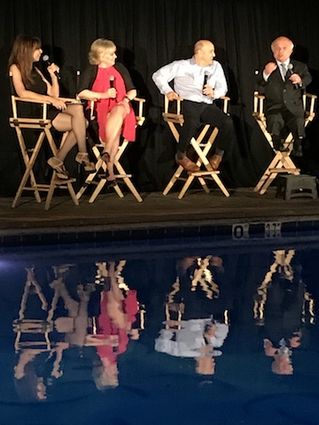 An additional festival treat was TCM/FilmStruck Host Alicia Malone's interview of actress Genevieve Bujold, in advance of the screening of her film, "King of Hearts" (1966). "King of Hearts" is a cult-classic, absurdist comedy set during World War One about a young Scottish soldier (Alan Bates) who is trying to diffuse a bomb in a mostly-abandoned town in France that has been overrun by escapees from the local insane asylum. The film juxtaposes the insanity of war with the insanity of the mentally ill. Actress Genevieve Bujold said that the film was extremely successful when it was released in 1966 because of its applicability to the Vietnam War, and that it is also extremely apropos now, in light of the global and political instability, the rise of nationalism, the escalation of violence, and the threat of war worldwide.

If you love classic movies and would like to see them on the big screen, go to "http://filmfestival.tcm.com" and sign up for the TCM Classic Film Festival Newsletter so you can get the inside scoop on next year's festival and the availability of festival passes and individual tickets.

Mr. Daniel Margolis did a great job covering the TCM event. So interesting to read about one of Hollywood's annual festivals that highlights classic films.