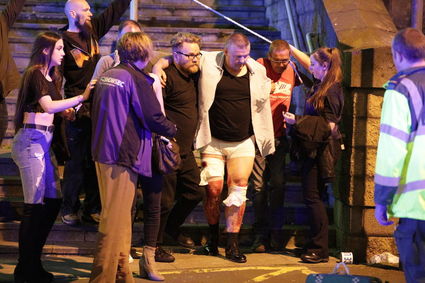 Eye witnesses reported that when the lights went up after the concert, the explosion happened outside the stadium.

@Arianagrade tweeted: broken. from the bottom of my heart, i am so so sorry. i don't have words.

An iexplosion at the Manchester Arena at around 10:40pm BST on 22 May 2017, caused at least 19 fatalities and hundreds of injuries, mostly to fans.

The explosion was near a ticket kiosk outside the stadium, leading security sources to believe it was a suicide bomber.

The explosion, described as a "huge bang", resulted in the adjacent Manchester Victoria railway station's services being blocked. Police described the reports as a "terrorism." The incident took place at the end of a concert by American singer Ariana Grande, during her Dangerous Woman Tour.

Police said the explosion took place outside the arena, which is near the Manchester Victoria transit station, as the concert ended at about 10:35 p.m. local time (5:35 p.m. ET), catching people as they exited.

Multiple senior U.S. law enforcement officials briefed by British authorities told NBC News that forensic evidence at the scene - including a body found at the blast site - indicated a suicide attack. U.S. officials said initial reports indicated that some of the casualties might have been caused by a stampede of concert-goers.

@Arianagrade tweeted: broken. from the bottom of my heart, i am so so sorry. i don't have words.

There have been multiple reports of a second explosion, heard once many concert attendees had left the arena.

City of Liverpool Mayor Steve Rotheram was present at the concert with his family. Ariana Grande herself was not hurt during the incident and was reported to be fine by several of her representatives.

Police have said they are treating the incident as a terrorist attack "until [they] know otherwise". Several sources, including some citing anonymous United States officials, have reported that the blast may have been a suicide attack.

At approximately 01:35 BST, a subsequent controlled explosion was conducted by police in Cathedral Gardens after what was believed to be an explosive device was found. The item was later determined to be clothing that had been left behind.

As the explosion was in the foyer/vestibule of the arena and the police suspect a suicide bomber please explain how on God's green earth this was an equipment overload????