73% of Americans Have Financial Regrets. Lack of Retirement Savings is #1 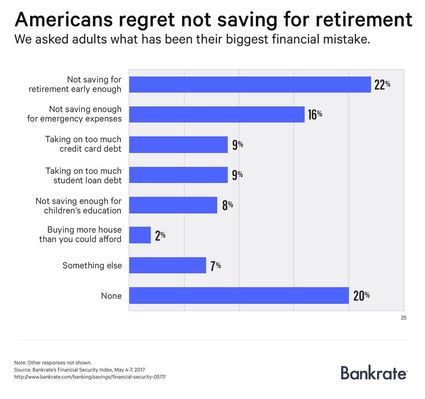 Nearly 3-in-4 U.S. adults have financial regrets, according to a new Bankrate.com report.

The most common is not saving for retirement early enough, followed by not saving enough for emergency expenses and taking on too much credit card debt.

Taking on too much student loan debt is fourth overall, however, it tops the list among older millennials (27-36 year-olds). Fifth overall is not saving enough for your children's education and sixth is buying more house than you could afford.

Baby Boomers are the most likely to regret not saving for retirement earlier; remorse over this issue grows steadily from age 18-62. It's also the biggest financial regret for every household income bracket above $30,000 per year and a close second below that threshold (to not saving enough for emergencies).

The top financial regret deals with not saving – either for retirement or emergencies – among every income bracket, level of educational attainment, gender, race, political affiliation, census region and community type, plus every age group except the aforementioned 27-36 year-olds.

"I've never met a person who regretted saving money," said Mark Hamrick, Bankrate.com's senior economic analyst. "Better to decide now in favor of aggressive saving rather than wait too long to begin and be sorry later."