Staff were also directed to take feedback from Thursday's School Board on a softball field. 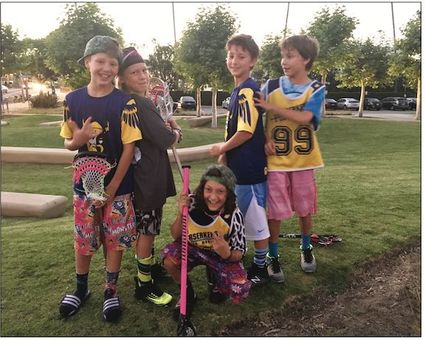 Members of the Santa Monica Vikings lacrosse team rallied at City Hall to register their support of a plan to replace the courthouse parking lot with an athletic field. From left to right: HenryOwen Miyoshi.Grebler, Henry Kress, Ozgood Hawkins, Jackson Tolmach, Ezekiel Peraza.

6/27: At its Tuesday night meeting, the Santa Monica City Council reaffirmed a "temporary" soccer/lacrosse field will be built at the Civic Center. If all goes according to current plan, it would be installed by March of 2021. Hurdles still to go include a parking study to assess adequate replacement parking options for when part of the Civic lot is removed to accommodate the field (parking study will take 9-12 months) and then Coastal Commission approval of the plan.

There had been a proposal to put the promised filed at Memorial Park on 16th Street. The Council considered but rejected an alternative plan that would have removed 2 baseball/softball diamonds at Memorial Park to install a rectangular field.

"The community told Council in no uncertain terms that Memorial Park is for our diamond sports not rectangular ones! Stay vigilant please - Council directed staff to work on a Memorial Park master plan & we don't know what configuration(s) of sports they might try to insert into that," said an e mail from Ann and Jaleh of the "Civic Center Task Force."

A hundred or so residents came to speak in favor of the proposed athletic field, including kids who were Lacrosse players. In speeches they decried the decline in the number of athletic fields at santa monica high school, which replaced its softball field last year with a new classroom building

A number of attorneys and employees of the Santa Monica Courthouse came to oppose turning their parking spaces, or any of them, into an athletic field. They spoke of how important it is for such people as women and children seeking protective orders against harassment, to be able to obtain access to the courthouse.

The Council also rejected a proposal to build underground parking for $92 million with an athletic field on top of it. This was described as too expensive by Councilmember Gleam Davis.

The City Council voted 7-0 to move forward with a temporary field at the Civic Center, at an estimated cost of $8.6 million, and work with the various constituents to address their parking needs. The motion included authorization for a mandatory parking study related to the site, issuing an RFP for renovation of the Civic building and analysis of additional field space at Memorial Park.

Staff were also directed to take feedback from Thursday's School Board meeting regarding the need for a softball field.