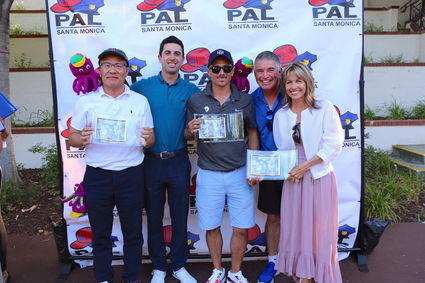 . The winning team, from left to right, is Glen Strauss, EJ Kahn, Bjohn Farrugia and Taiji Endo. The funds raised by the tournament will be used to assist the advancement of PAL programs in Santa Monica, which support educational initiatives such as the homework assistance, university/college tours, SAT Prep classes as well as post- high school scholarships through the Chris Carrey PAL Education Fund.

Now in its 8th year, the tournament hosted 150 golfers for a round of competition and a good cause while raising more than $91,000 to help support the Santa Monica PAL program. The tournament field and guests featured a wide array of Santa Monica community members including many Santa Monica Police officers and local business people.

"The annual PAL Charity Golf Classic is a chance for the Santa Monica community to get out and have a good time and raise some money for a very important cause," said Eula Fritz, Director at Santa Monica Police Activities League. "The tournament continues to grow each year and we're very grateful for everyone's support. The proceeds from the tournament will be used to help improve the lives of hundreds of Santa Monica youth."

The monies raised from this event will be used to assist the advancement of PAL programs in Santa Monica, which are free for Santa Monica youth and assist kids 6 to 17-years-old to establish self-esteem and reach their full potential.

PAL programs support educational initiatives such as the homework assistance, university/college tours, SAT Prep classes as well as post- high school scholarships through the Chris Carrey PAL Education Fund. In addition, the funds will be used for PAL's health/wellness component that include PAL circus as well as the Martial Art of Karate.

The PAL 2017 Golf Classic Committee was made up of the PAL Board of Directors, City and Police Officials, and Community leaders. Through the committee's tremendous efforts and hard work, they were able to surpass last year's tournament proceeds.

The Santa Monica PAL is a City of Santa Monica staffed nonprofit organization dedicated to providing a safe and supervised place for young people. PAL teaches skills, promotes self-respect and respect for others, and helps kids reach out to their peers and to adults. PAL provides free academic and cultural programs and a wide variety of recreational activities.

All PAL Programs are free and open to youth ages 6 to 17-years-old living or attending school in Santa Monica. The PAL Youth Center is located at 1401 Olympic Blvd., Santa Monica, CA 90404. The Center is open year-round, Monday-Friday from noon to 10 p.m. and Saturday noon to 6p.m.