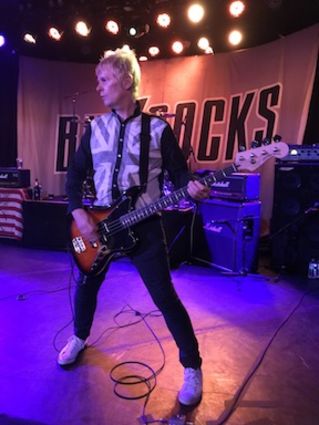 Photo of Buzzcocks' bassist Chris Remington at the June 30, 2017, Buzzcocks concert at the Roxy Theater in West Hollywood.

Last year, the historic classic rock music festival, "Desert Trip", sold out – twice. And this year, on June 29 and 30 at the Roxy Theater in West Hollywood, so did the Buzzcocks.

The Buzzcocks are one of Britain's ground breaking and most influential punk bands. Formed in 1976, the Buzzcocks rose to almost instant fame due to their fusion of pop, funk, and punk rock, their heavy guitar riffs, odd chords with catchy melodies, avant-guard elements, emphasis on the human condition, unbridled energy, edgy lyrics, rapid-fire execution, fast, tight drumming, and the overall excitement they brought to the stage.

Shortly after their band formed, the Buzzcocks began fronting for fellow British punk rockers, the Sex Pistols. Then, within a year, they formed their own record label and released their first album, "Spiral Scratch". "Spiral Scratch" was the first independently produced album of the punk-rock era and its debut gave impetus to others to follow suit.

Shortly thereafter, the Buzzcocks signed with United Artists. In 1978, they released their first major label studio album, "Another Music in a Different Kitchen". With this album, they created a new music genre, "pop-punk", which influenced many bands that followed, including U2 and REM.

The name, Buzzcocks, was taken from a Time Out Magazine headline about the TV rock series, "Rock Folly" – "It's the Buzz, Cock!". "Buzz" is slang for "excitement" and "Cock" is Manchester slang for "mate" or "bloke". 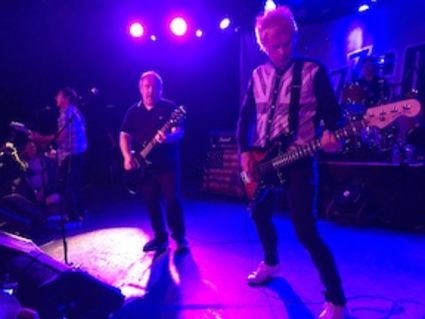 The Buzzcocks played together from 1976 to 1981, when they broke up due to a disagreement with EMI Records who bought out United Artists. They reunited in 1989 and have been together ever since. Over time, band members came and left. Today's Buzzcocks include Pete Shelley (founder), Steve Diggle, Chris Remington, and Danny Farrant.

It has been over forty years since the Buzzcocks broke out in the music industry, and the band is still as vibrant as ever. The energy at The Roxy Theater was electrifying. The band played 22 songs, five from their early singles, eight from their early albums, and the rest spanned the remaining three decades. Within the first few songs, a mosh pit formed by the center of the stage, and those who were not moshing were jumping up and down, singing along, and dancing to the music.

The Buzzcocks are currently on a world tour that includes concert venues and music festivals in the United States, the United Kingdom, Spain, Belgium, and Croatia. For more information, visit http://www.buzzcocks.com.