Winter Is Here: HBO Rolls Out Icy Blue Carpet for Season 7 Premiere of "Game of Thrones" in Los Angeles 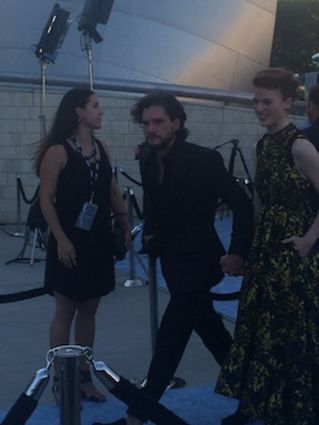 HBO's Emmy-winning "Game of Thrones," which is based on George R.R. Martin's "A Song of Ice and Fire" books, premiered its seventh season in downtown Los Angeles last night at the Walt Disney Concert Hall.

Numerous cast members, including Kit Harington, who plays Jon Snow on the show, and Sophie Turner, who portrays Sansa Stark, made an appearance. The event drew other stars, as well – Queen Latifah, Jimmy Kimmel, and Amanda Peet were spotted in the crowd.

Before screening the highly anticipated first episode of the upcoming season, HBO requested that all "lords, ladies, wildlings, and CAA agents" refrain from taking videos and photos, and sharing spoilers. And to start off the night, the show's famed composer, Ramin Djawadi, conducted a live performance of the theme song, drawing a standing ovation from the crowd. HBO has been building up anticipation ahead of Sunday's official premiere (9 ET/PT);

viewers got a sneak peek back in March. The series is HBO's biggest ever, averaging around 25 million viewers during its sixth season. It only has two more seasons to go, with 13 episodes left to air. However, the premium cable channel recently announced that it is developing scripts to spin off the series and to "explore different time periods of George R. R. Martin's vast and rich universe."

For the occasion, Walt Disney Concert Hall was lit up with colorful projections of "Game of Thrones" themes, including fire, dragons, and an eerie White Walker. Guests were invited to a lavish after-party, where they were greeted by a glowing Night King and got the chance to take pictures in a mock Iron Throne.