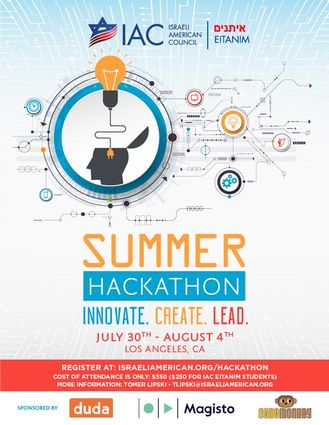 Approximately 160 teenagers will work with high-level technology executives and entrepreneurs during the intensive, six-day program.

BEL-AIR, Calif. – The Israeli-American Council (IAC)'s Eitanim program will host its second-annual hackathon for approximately 160 Jewish middle and high school students from across the country for six days, from July 30 to Aug. 4, on the campus of the American Jewish University.

Icons of Israeli innovation will mentor the teenagers throughout the immersive program, during which teams of students will design and create education technologies aimed at teaching teens and preteens Hebrew and about Israel. Mentors will include leading executives from Microsoft, Cisco and Amazon, as well as noted venture capitalists, high-tech entrepreneurs and academics.

IAC Eitanim is a project-based learning program that draws on the inspiration of Israeli innovators to teach teenagers critical thinking and leadership skills while strengthening Jewish identity. The program fosters a strong sustainable community, providing the students with the knowledge, tools and opportunities to be leaders in their communities.

"The teenagers who participate in IAC Eitanim develop confidence, creativity and a connection to Israel by solving real world challenges, while working with experts that help them navigate the process of cultivating creative ideas and solutions," IAC Co-Founder and CEO Shoham Nicolet said. "Through its unique project-based learning model, which was developed in Israel, this program is developing the next generation of innovators, leaders and entrepreneurs."

Participants will come from across the country to hear presentations from industry experts before breaking up into teams that will create a brand-new product from inception to execution. Team structure, idea generation, and product design will be entirely student-led. Divided into start-up teams, students will choose specialized roles for themselves and engage in every step of product development, from research to marketing.

The hackathon will conclude on Aug. 3 from 6 p.m. to 9 p.m. with a Demo Day that is open to the media. To attend, please RSVP to Ilana Blum at [email protected] Students will present their products to the community, donors and a panel of judges, which includes Ilana Golan of Speaking Golan Ventures, who was named a 2017 Women of Influence in Silicon Valley, and Kfir Gavirieli, the co-founder and CEO of popular footwear company Tieks.

After launching in fall 2016, IAC Eitanim has grown to include more than 300 participants and 16 chapters in cities across the country, and will expand to 30 chapters in the upcoming school year. The program seeks to ignite a passion for technology in young people and build bridges between the Israeli-American and Jewish American community among youth. Approximately half of the hackathon participants are Israeli-Americans and half are girls, a spread that mirrors the demographics of chapter members across the country.

"My introduction to Eitanim was last year's hackathon, where I learned a lot about technology, leadership and teamwork, and made lasting friendships with Israeli-Americans and other Jewish Americans," said Pnina Tofler, a 10th grader who is in IAC Eitanim's Los Angeles chapter. "During the school year, we work with many amazing mentors who have a lot of experience, but the hackathon has mentors from all around the country-not just ones from Silicon Beach. I'm also really excited to see the friends I made last year and make new ones this year.

The rapid growth of the program mirrors the rapid growth of the IAC, which in the last year, has added five regional chapters, opened centers in three cities, and added new programs to engage its active constituency of more than 250,000, making the IAC the fastest-growing Jewish organization in the country.

The program is named for Major Eitan Belachsan, an Israeli war hero who was killed during an operation in Southern Lebanon in 1999, and draws inspiration from his life and values. The hackathon is co-sponsored by DudaMobile, Magisto and Codemonkey.

About the IAC: Headquartered in Los Angeles, the IAC is committed to building an engaged and united Israeli-American community that strengthens our next generations, the American Jewish community, and the State of Israel. The IAC strives to achieve these goals through programs and events for all ages-and by empowering and supporting a wide array of non-profit organizations within the Israeli-American community. For more information about the Israeli- American Council, please visit http://www.israeliamerican.org