Las Posadas: Do You See What I See? 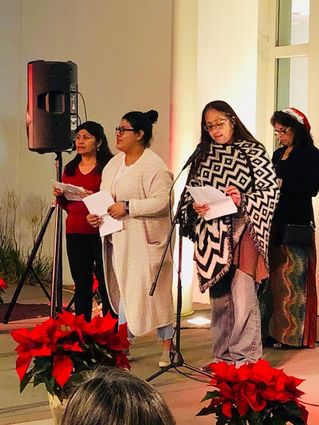 "Said the night wind to the little lamb

Do you see what I see?

Way up in the sky little lamb

Do you see what I see?" ~Christmas Carol by Noël Regeny & Gloria Shayne Baker

Las Posadas is Spanish for lodging, or accommodation, which in this case refers to the "inn" in the story of the nativity of Jesus (born from a Jewish mother). The novenario (nine days of religious observance) is celebrated chiefly in Latin America and by Hispanics (Latinos and Spaniards) in the United States beginning on the 16 of December and ending the 24 of December. Novena represents the nine-month pregnancy of Mary, the mother of Jesus celebrated by Christians. While its roots are in Catholicism, even Protestant Latinos follow the tradition. The Jewish Hanukkah tradition runs for nine days as well.

My grandfather immigrated from Mallorca, one of the Balearic Islands in Spain to another island in the Caribbean, Puerto Rico. Part of our holiday tradition involved going to Dawn Mass (Misas de Aguinaldo) for nine days before Midnight Mass (Misa de Gallo) on Christmas Eve. After each mass, a breakfast consisting of hot chocolate and ensaimadas (a spiral sweet bread pastry product of Mallorca) was served. Is a symbol of the Balearic Islands, a common cuisine eaten in most former Castilian territories in Latin America and the Philippines. Originated as a merienda snack, it was later introduced to the Philippines and Puerto Rico through colonialism. They're traditionally made with dough that's rolled thin, "laminated" with lard and rolled like strudel. Starbucks used to carry them during the holiday season, but I've missed them for years now.

According to research, historical accounts show that since Masses were forbidden to be said during night time, these Masses were offered in the darkness of dawn amid the blaze of many lighted candles, especially for farmers and workmen who had to labor afterward. The candlelight, not only provided the necessary lighting but also added meaning to the Rorate Masses by reminding the faithful of "the Light that is to come." Hence, they are also called Missa Aurea or Golden Mass. This was most probably the origin of the Misas de Aguinaldo in Spain and later, in the New World. In the New World, which included the Americas, and the Philippines, the original permission for the Misas de Aguinaldo was granted to churches under the Augustinian Order where they could be accessed by the faithful through the indulgences granted by Pope Sixtus V. In 1586, Friar Diego de Soria obtained a papal bull from Pope Sixtus V, stating that a Dawn Mass, be observed as novenas on the nine days preceding Christmas Day throughout Mexico.

During las Posadas, two people dress up as Mary & Joseph. Houses are designated to be an "inn" (thus the name "Posada"). The head of the procession will have a candle inside a paper lampshade. At each house, the resident responds by singing a song and Mary and Joseph are finally recognized and allowed to enter. Once the "innkeepers" let them in, the group of guests come into the home and kneel around the Nativity scene to pray (typically, the Rosary). Latin American countries have continued to celebrate this holiday to this day, with very few changes to the tradition. In some places, the final location may be a church instead of a home. The people asking for posada travel to 1 house each night for 8 nights. Similar celebrations exist in the Philippines, where strong cultural influences persist from Spanish Colonial times, the Posadas tradition is illustrated by the Panunuluyan pageant. It might be performed immediately before the Midnight Mass or on each of the nine nights. Cuba also has something similar, called Parrandas (though they have more of party in the atmosphere and liquor is involved).

The three parishes of Santa Monica – St. Anne Church and Shrine, St. Clement Catholic Church, and St. Monica came together to celebrate a Posada on Monday evening followed by the best tamales, champurrado (Mexican hot chocolate and corn drink) and ice cream. At the end of the villancicos (Spanish Christmas carols), children broke open a star-shaped piñata filled with candy inside.

Familias Latinas Unidas [United Latino/a Families] hosted Las Posadas on Friday, December 15, 2017. They meet every Friday evening at Virginia Avenue Park, to organize events that allow Latino/a culture to thrive. Their goals include fostering education for their children, preserve and share their culture and build leadership skills. As of late it has become more of an activist group divided by political forces seeking influence in City Hall. Ironically "unidas" means united.

Back in October, interested in the upcoming Dia de Los Muertos and Posadas for my blog Diversity Matters, I joined one of their meetings. In the name of diversity and inclusion, I wanted to bring Spanish and Latin traditions to the Posadas funded by City of Santa Monica Government. Board member Irma Carranza and Sofia Ramirez insulted me during a leadership building exercise during the meeting. Carranza unilaterally decided I could not assert my first amendment right to write a column in support of the posadas ahead of their event to include the rest of the community, out of the private nature of the event. They feared there would not be enough food if everyone was invited. Accusations that I was a spy with two other ladies in the meeting followed. Sounds like a holiday family reunion to me. Right?

Back in April, Julie Rusk, Santa Monica Chief of Civic Wellbeing tweeted the hashtag #BetterTogether #SaMoWellbeing during Cesar Chavez celebration of Familias Latinas Unidas in Virginia Park. As of late, Ms. Rusk has been influential in the group. Debasing the values of civility, compassion and authentic wellbeing is not what reasonable people categorize leadership building values to foster the education of children in our city. In a free country, everyone is entitled to their opinion. However, facts do matter.

The moder colonization of hearts and minds of 90404 seems to be causing heated debate in the community. The upcoming consideration of a Conditional Use Permit needed for a 20 student school in the Gandara Park of Pico Neighborhood presents a conflict of wellbeing interests to some residents that will be heard at Council Chambers next month.

Let's consider the exceptional insight in Niccolo Machiavelli, The Prince:"It ought to be remembered that there is nothing more difficult to take in hand, more perilous to conduct, or more uncertain in its success than to take the lead in the introduction of a new order of things. Because the innovator has for enemies all those who have done well under the old conditions and lukewarm defenders in those who may do well under the new. This coolness arises partly from fear of the opponents, who have the laws on their side, and partly from the incredulity of men, who do not readily believe in new things until they have had a long experience of them." Compassion, authentic wellbeing, diversity and inclusion are harder to accomplish in an equity starved community. 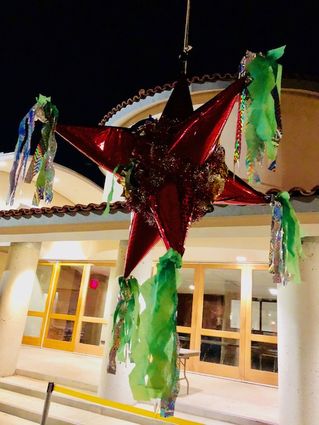 Earlier this week Susan Fowler wrote about her belief that Silicon Valley's focus on "diversity " and "inclusion" is its own way of "whitewashing" what in reality is another form of workplace discrimination. It was not a criticism of the hardworking people who put their lives and energies into promoting authentic diversity and inclusion, It was an indictment of the companies that use their D&I programs and efforts to "whitewash" their discriminatory practices. They are not alone, seems like Silicon Beach has similar problems. Withing the paramenters of the City council strategic goal of diversity and inclusion, affordable housing being built, is financially segregated despite academic research showing better alternatives and outcomes with inclusive affordable housing. That alone, is worth praying for during The Posadas and Midnight Mass.

Do you see what I see?

You say (quote) In the name of diversity and inclusion, I wanted to bring Spanish and Latin traditions to the Posadas funded by City of Santa Monica Government. (close quote) What Posadas are funded by the government City of Santa Monica? It would be a violation of the First Amendment for the city to force taxpayers to subsidize a religious event.