"Gurley can do it out of the backfield, in the pass, in the pass protection game. But the way he runs is special." 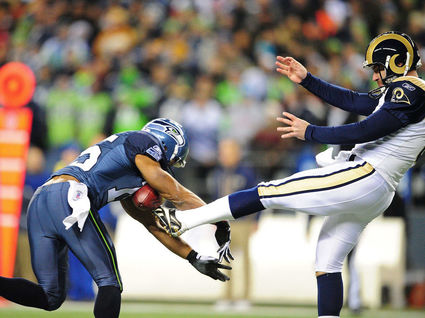 It was the worst beating suffered by Seattle since Pete Carroll started coaching there in 2010.

There's a new sheriff in the NFC West... wearing a blue helmet with white horns.

The reign of the Seahawks came crashing down at CenturyLink Field as the Los Angeles Rams pillaged Seattle, 42-7. The win gave the 10-4 Rams a two-game lead over the Seahawks with two games remaining in the 2017 regular season.

It was the worst beating suffered by Seattle since Pete Carroll started coaching there in 2010. The Seahawks finished first in the NFC West four times in the past seven years including a Super Bowl title four years ago.

The Seahawks under Carroll, the oldest head coach in the NFL at 66, are being eclipsed by the Rams under first-year head coach Sean McVay, the league's youngest head coach at 31.

"I thought our coaches did a great job getting these guys ready and then the players ended up delivering in big way today," said McVay. "Very pleased and it continues to demonstrate that kind of mental toughness we talk about, responding the right way after you face some adversity. And that's why you have to love this football team."

The Rams wreaked havoc on the Seahawks in all three phases: offense, defense and special teams. Running back Todd Gurley pushed himself into the league's MVP-talk by torching the Seahawk defense for four touchdowns on 152 yards rushing and 28 yards receiving. Through 14 games Gurley leads the league with 17 touchdowns: 13 rushing and four receiving.

Robert Quinn had a pair, Connor Barwin had one while Michael Brockers and Matt Longacre teamed up for one. The defense put Wilson under constant duress the entire game, allowing him only 14/30 completions for 142 yards. The Ram frontline smothered the Seattle running attack so much that Wilson was their leading rusher with only 39 total yards.

Pharoh Cooper had a field day returning kicks. He returned a punt 53 yards, just inches shy of the goal line, setting up Gurley's first touchdown of the game. Cooper returned seven punts for 128 yards. He returned two punts for 26 yards each setting up a touchdown.

Kicker Greg Zuerlein opened up the Rams' scoring with two field goals on their first two drives. Alec Ogletree's fumble recovery on Seattle's first drive of the game set up the Rams' first score. Zuerlein added four extra point kicks and continues to lead the NFL in scoring this season with 158 points. Punter Johnny Hekker kicked five punts for an average to 39 yards including two inside the 20-yard line.

Goff completed 14/21 passes for 120 yards, two touchdowns and one interception. Goff threw a one-yard touchdown pass to Robert Woods in the second quarter and a 14-yard touchdown to Gurley in the third. Sean Mannion replaced Goff at quarterback in the fourth quarter with the game already in hand.

Goff: "Anytime you come up here and it's loud and you're able to quiet those fans, win the game, it's big but like I said, it's one of 16 and they all count the same. One that we wanted and needed but we're not going to hang our hat on it. We have work to do still."

On Tuesday the NFL announced that five Rams were selected to the 2017 NFC Pro Bowl team. Noted that all five were instrumental in the victory over Seattle. Todd Gurley was selected as starting running back and Aaron Donald as starting interior lineman. Greg Zuerlein, Johnny Hekker and Pharoh Cooper swept all three special team positions for the NFC squad.

The Rams need one win in their last two games to clinch the NFC West. They travel to Tennessee this weekend to take on the Titans, currently holding the top wild card slot in the AFC. The Titans lost on a game-ending field goal to the San Francisco 49ers on Sunday, 25-23. 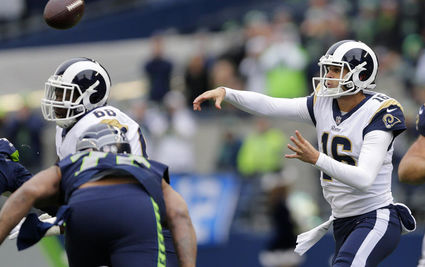 The Seahawks finished first in the NFC West four times in the past seven years including a Super Bowl title four years ago.

Titans quarterback Marcus Mariota threw two touchdowns and passed for 241 yards against the 49ers. Mariota has thrown 14 touchdowns but also 12 interceptions this season and has a QB rating of only 79.7. Running backs DeMarco Murray and Derrick Henry lead the ground attack with a combined total of 1,279 yards rushing.

McVay and the Rams will once again use Wednesday as a walk-through practice in preparation for the Titans as they did against the Seahawks. "Guys looked fresh. I thought we played fast... We feel like that's going to be the best thing and that's the approach we'll take this week again."

The temperature for game-time in Nissan Stadium, Nashville is expected to be chilly at 37 degrees and partly cloudy. McVay: "I think it was good for us to be able to play in Seattle... last week served us in a valuable way where we'll be able to use that being able to move forward into this week against Tennessee."