Pedestrians and cars will no longer mingle, but cars will still park on the bridge 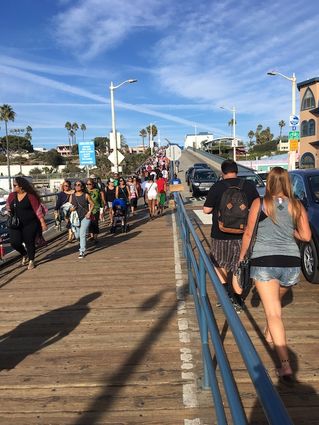 On a hot summer day, pedestrians proceed to the bridge that links the Pier to Ocean Avenue

The Santa Monica Pier is the symbol of the City. However, the bridge we have all walked down to get to the 100 year old wooden structure from Ocean Avenue has been ruled seismically unsafe and is slated to be replaced by two modern bridges.

The 1939 era bridge is also regarded as unsafe because it is crowded, and mixes pedestrians with over 3600 automobiles on a summer day.

The 1980's era divide between men and machines (it's called a "K Rail") just doesn't accommodate modern crowds safely. And the 34 wide, steep bridge is not ADA compliant (i.e. handicapped folks can't use it safely).

City staff have recommended replacing the current structure with two separate bridges: one for automobiles, and one for pedestrians and bikes.  A new 40-foot bridge would connect pedestrians and bikers to the Pier from Colorado Avenue.  Emergency vehicles and delivery trucks may use the span during off-peak hours.

A lower, second bridge would allow cars to access pier parking from Moss Avenue.  The bridge would be span 150 feet over Ocean Front Walk where Restaurants currently are located, with two vehicle lanes separated by barriers.

The construction would be done in stages, so that the Pier would always be accessible, says Staff.

All options would either construct an elevator for handicapped visitors, or a separate ADA walkway cantilevered from the side of the bridge.

The Santa Monica Pier is a large double-jointed pier at the foot of Colorado Avenue in Santa Monica, California. With an iconic entrance, the pier is popular with residents and visitors as a landmark that is over 100 years old

The pier contains Pacific Park, a family amusement park with its one-of-a-kind, state-of-the-art, solar panelled Ferris wheel. (This should not be confused with Pacific Ocean Park, a former amusement park a few miles south of Santa Monica Pier, which operated from 1958 to 1967 and is now demolished.)

It also has an original carousel hippodrome from the 1920s, the Santa Monica Pier Aquarium operated by Heal the Bay, shops, entertainers, a video arcade, a trapeze school, pubs, and restaurants. The pier's west end is a popular location for anglers.

During the summer months the pier is venue to weekly outdoor concerts, movies, and other family friendly activities, many of which are free to the public.

leave the bridge alone. you screw the pier up when worked on that leave history alone.