Fireside at the Miles

The four Freshman perform at Pepperdine

Renee Levine Packer, author of Gay Guerrilla: Julius Eastman and His Music (2015), will join Artistic Director Patrick Scott for a pre-concert discussion on protest music and revising history on Inauguration Day. The author will be available for book signings after the concert. The concert, INDIVISIBLE, will feature two major works of piano music. Inna Faliks opens the concert with the hour-long epic protest classic The People United Will Never Be Defeated by Frederick Rzewski, followed by the LA premiere of Gay Guerilla by Julius Eastman, both songs observe Inauguration Day.

Fireside at the Miles

Fireside at the Miles brings a season of music, dance, storytelling and more. All are invited to sit back, relax, and enjoy organic snack and beverages with cozy performances in front of an open fire in Santa Monica's historic Miles Memorial Playhouse. On Friday, Los Angeles Flute Orchestra performs a unique repertoire of jazz, folk and classical selections on some of the largest flutes in the world. On Saturday, Only Voices A Capella Night hosted by Tom Keyes presents three eclectic all-vocal groups that will serenade with surprising arrangements, familiar tunes and new sounds.

Bossa Nova & the Jazz Influence with The Angelo Metz Quartet

The Angelo Metz Quartet performs a repertoire exemplifying the influences of jazz in the Brazilian musical style of Bossa Nova, and explores its incorporation into the classic American Jazz songbook. The quartet consists of guitarist and vocalist Angelo Metz, keyboardist Rick Olson, drummer Lucio Vieira, and bassist Michael Alvidrez. 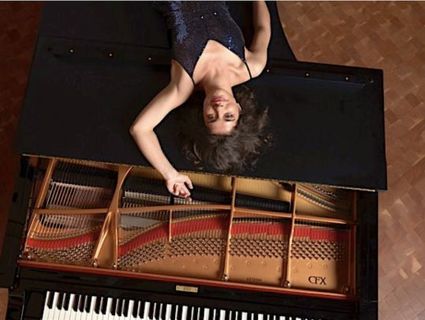 The City of Santa Monica announces playwright Luis Alfaro as the new writer-in-residence at the Annenberg Community Beach House from January 9 to March 13, 2018. While at the Beach House, Alfaro is working on a contemporary adaptation of Bertolt Brecht's Mother Courage and her Children for Center Theatre Group with an eye on the homelessness crisis in Los Angeles. He will also continue work on The Golden State, a trilogy of plays commissioned by San Francisco's Magic Theatre and the Oregon Shakespeare Festival. The first part, Delano, focused on a Pentecostal minister and his flock in the Central Valley birthplace of the United Farm Workers of America union.

Alfaro is working from the resident office in the Marion Davies Guest House. The public is invited to his office hours Saturdays from 11am-2pm. He is also presenting monthly public programs under the theme of "Things We Share" on Tuesdays at 6:30pm, 1/23/18, 2/20/18 and 3/6/18. From mid-January, follow his updates on beachhouseair.blogspot.com.